The Wire Troll: Kyle Farmer Killing It for Reds 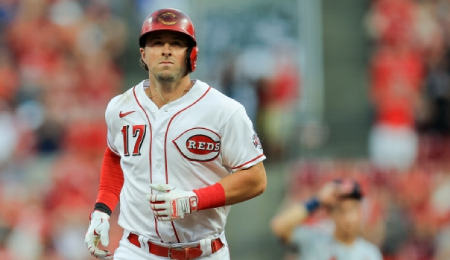 Welcome back to another week of Fantasy baseball. With June upon us, the push to improve your team takes on greater importance, so be sure to milk that waiver wire.

This week, red-hot Francisco Lindor slammed his finger in a door, but lucked out and only missed Thursday’s action as a result; Max Kepler and three Twin relievers (including closer Emilio Pagan) will miss the series in Toronto because of vaccination issues; and Jameson Taillon continued his breakout by taking a perfect game into the eighth on Thursday.

Kyle Farmer, SS/3B, Cincinnati Reds (ESPN: 26.2 per cent; CBS: 37 per cent): Given the offensive growth he showed last year, Farmer earned consideration for our 2021 Wire Troll All-Star Team. This year, he wasn’t very productive despite tons of PT in April, before turning that around in a big way in May and then beginning this month on fire. Farmer launched a three-run jack on Thursday (just a few days after another three-run dinger — see video below), and while his overall hitting seems to have plateaued, his slugging percentage is at a career best, and we know what can happen when he gets super hot (.395/.456/.691 in July). The Atlanta native and former Dodger prospect has always had an MLB-swing, so give him a look if you need infield help.

Jermaine Palacios, SS, Minnesota Twins (ESPN: unowned; CBS: unowned): Palacios is not exactly a dynamic prospect, but he was holding his own in his first taste of Triple-A this year, scoring plenty of runs and hitting for a decent average. He was recently recalled for his first taste of the Show in the wake of a rash of injuries for the Twins, including Carlos Correa (Covid) and Royce Lewis (knee). While Palacios hasn’t lit the world on fire, he does have two hits and a walk over the last four games, so could be a decent option in very deep AL-only leagues for the short term, especially given his speed potential.

Nick Gordon, OF/2B/SS, Minnesota Twins (ESPN: 0.4 per cent; CBS: 2 per cent): Did we mention Minnesota is having manpower issues right now? Toss in Gilberto Celestino (illness) and Kepler (unvaccinated, so skipping the trip to Toronto), and it’s created some short-term opportunities. In late-July, we recommended Gordon as someone that could be a useful second half player, and while he struggled in July and was only slightly better in August, he was wonderful in September, flashing his speed with a fine BA and a bit of pop. Now, he’s getting more PT again, and has shown slight improvements at the plate despite regression in his extra-base sock. Gordon has managed multi-hit efforts three times over the last nine games, and given his stolen base prowess (another steal on Friday), he’s a nice add in AL-only leagues, so take a look if you need some outfield help. You should also give fellow Twin outfielder Kyle Garlick some consideration.

Keegan Thompson, RP/SP, Chicago Cubs (ESPN: 44.7 per cent; CBS: 37 per cent): In late-August, we pimped Thompson as an arm to watch. And while that didn’t pan out last year, he sure is getting our attention this season. He’s also got the attention of his manager, David Ross, who believes that Thompson deserves to make the NL All-Star Team, and to help manifest that, he moved him into the rotation. Unfortunately, on Thursday Thompson gave up more than two earned runs in a game for the first time all season, and he slowly seems to be coming back to earth after an other-worldly start to 2022. But we’re still talking about a dude that’s somehow undefeated through four starts and eight relief appearances despite pitching for a lousy team.

Chinese pianist Lang Lang teamed up with American singer Madeleine Peyroux in 2016 to release a version of “Moon River,” from Breakfast at Tiffany’s.

By RotoRob
This entry was posted on Saturday, June 4th, 2022 at 2:22 pm and is filed under BASEBALL, RotoRob, The Wire Troll. You can follow any responses to this entry through the RSS 2.0 feed. Both comments and pings are currently closed.