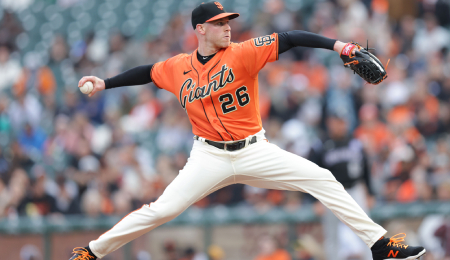 Are the Giants suffering from buyer’s remorse after re-signing Anthony DeSclafani? (NBC Sports)

Heading into the 2020 season, we were bullish on Fernando Tatis Jr.‘s chances of developing into a superstar, but he actually took a bit of a step back despite some impressive counting cat numbers.

Last year, he was better than ever and set a career high in games despite shoulder woes that cost him several weeks of the schedule. Unfortunately, Tatis broke his wrist this spring, and has yet to make his 2022 debut.

Is it too early to label him injury prone? And with Tatis scheduled to return in about a month, where will he play?

While shortstop is his natural position, he also saw a fair amount of time in the outfield last year. Currently, the Padres are using Ha-Seong Kim at short, and he’s been superb defensively.

Perhaps allowing Tatis to take over at designated hitter (where Robinson Cano looks even worse than he did with the Mets, and Luke Voit has continued to regress) is the answer. For the time being, the Pads could allow Tatis to play outfield once or twice a week and let him play at short when Kim needs a rest.

The key here is to get his power bat back in the lineup without removing Kim — who’s taken a nice step forward at the plate and is great with the glove.

It’ll be interesting to see how San Diego plays this when Tatis is ready to return at the end of June.

Think the Giants are kicking themselves for opting to re-sign Anthony DeSclafani while letting Kevin Gausman walk? DeSclafani never looked worse to start the season and now he’s on the 60-day DL with an ankle problem. Sure, DeSclafani showed some nasty stuff last year (see video below), and perhaps can get back to that form before the end of the season, but Gausman has already accumulated 1.6 WAR through nine starts with the Jays. Oops.

The buy-low window to acquire Red Sox 1B Bobby Dalbec looks like it’s closing. He smoked a two-run dinger Sunday as part of a two-hit day, giving him a modest four-game hit streak that includes two homers, five runs, four RBI and a walk. Dalbec hit very poorly in April, but has been starting to rack up some decent counting cats this month. Yes, it’s been all downhill since he teased us with a tremendous 80-at-bat showing in 2020, so while we may have to adjust his ceiling, we’re not ready to throw in the towel on him just yet.

When Kurt Suzuki got hurt the other day, you probably had a similar reaction: “Oh! He’s still playing?” Yup. At the age of 38, Suzuki is no longer seeing much action (just 15 games so far this season), and his offense has been regressing for a few years now. But did you know that he is the second-closest comparable player to 11-time All-Star catcher Del Crandall? That is not a bad career to emulate.

By RotoRob
This entry was posted on Monday, May 30th, 2022 at 12:03 pm and is filed under BASEBALL, MLB Today, RotoRob. You can follow any responses to this entry through the RSS 2.0 feed. Both comments and pings are currently closed.