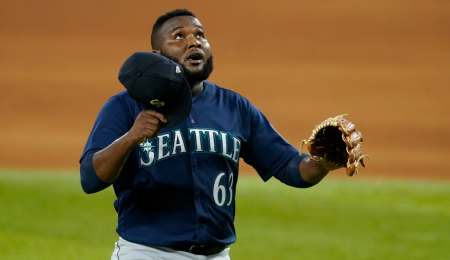 Diego Castillo’s recent work has him in the mix for saves. (Tony Gutierrez/Associated Press)

Welcome back to another week of Fantasy baseball. We’re into mid-June now, so as the Angels morph from contenders to pretenders, let’s see who looks like a good waiver wire addition this week.

This week, Shohei Ohtani helped pull the Halos out of their worst streak ever; Stephen Strasburg (thoracic outlet syndrome) got smoked in his long-awaited return; and Minnesota’s first three hitters all went yard on Thursday, just the seventh time that’s ever happened in MLB history.

Diego Castillo, RP, Seattle Mariners (ESPN: 4.6 per cent; CBS: 12 per cent): Continuing a recent trend, Castillo was filthy good on Thursday in bagging his second straight save. While he hasn’t necessarily usurped Paul Sewald as the Seattle closer, Castillo has definitely worked his way into the mix and deserves consideration notwithstanding his role. After a sweet start to the season, Castillo got roughed up last month but has been rolling now with seven straight scoreless outings (two saves, two wins and a hold) to eat into what was an awful ERA for a while there. The beefy righty is still working his way out of that hole, but man is he ever looking good now thanks to a recovery in his fastball velocity this season. Grab Castillo in AL-only leagues and deeper mixed formats; worst case scenario is you’ll land a super hot set-up man. Hell, he’s even willing to lug his massive frame off the mound to make a defensive play from time to time (see video below).

Geraldo Perdomo, SS, Arizona Diamondbacks (ESPN: 0.3 per cent; CBS: 4 per cent): Perdomo made our Top 100 Prospects list as recently as last year before dropping off this season after his struggles in Double-A in 2021. Still, he showed a little something-something in his brief MLB debut last year before struggling with his productivity in the bigs so far this season. However, Perdomo could be worth a look in deeper leagues given that his job security just got a boost with Nick Ahmed (shoulder) shifted to the 60-day IL. At the very least, Perdomo has shown great glovework all over the infield and on Tuesday he smoked a grand salami for his first big league dinger. He racked up a ton of runs, showed flashes of a solid hit tool and displayed nice speed over his minor league career and is still just 22, so there could be some nice upside here.

Now 76, songwriter supreme Donovan really built a unique sound over the years. Here’s another track from 1969’s Donovan’s Greatest Hits, with a re-recording of the song “Colours,” the original of which was released in 1965.

By RotoRob
This entry was posted on Saturday, June 11th, 2022 at 12:23 pm and is filed under BASEBALL, RotoRob, The Wire Troll. You can follow any responses to this entry through the RSS 2.0 feed. Both comments and pings are currently closed.