The Wire Troll: Taking a Flier on Tyler Gilbert 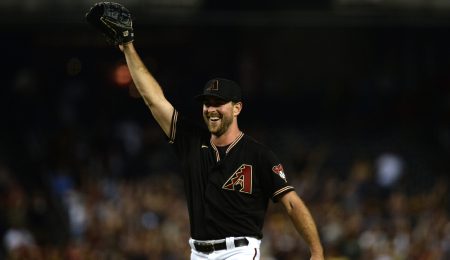 Welcome back to another week of Fantasy baseball. As we enter the waning days of August and find ourselves passing the season’s three-quarters mark, your chances of making a move in your leagues are dwindling. Take advantage of the wire!

This week, Giannis Antetokounmpo bought a slice of the Milwaukee Brewers; The A’s are proceeding with new ballpark plans in both Oakland and Las Vegas; and the Field of Dreams game will go again next year, with the Reds and Cubs squaring off.

Tyler Gilbert, RP/SP, Arizona Diamondbacks (ESPN: 26 per cent; CBS: 36 per cent): Gilbert burst onto the Fantasy radar last Saturday when he hurled a no-hitter at the Padres in his first career start (see video below). Start No. 2 on didn’t go as swimmingly, but you can forgive anyone from getting beat up in Coors Field, so he remains an intriguing add for the stretch run. Gilbert first drew our attention way back in early March 2015 when he was pitching for USC. And so far in his brief time in the bigs, he’s done a good job suppressing runs, and even in Friday’s loss, it wasn’t an awful outing, but again, Coors Field can often humble even the top aces. The 27-year-old Gilbert’s go-to pitch is a cutter, and he mixes in a fastball, sinker and curve.

Eric Lauer, SP, Milwaukee Brewers (ESPN: 37 per cent; CBS: 27 per cent): This lefty has owned the Pirates, but how will he fare Saturday against the Nats, who are actually playing well now? Well, with a career mark of 0-1, 2.89 against Washington, Lauer has done quite well, and really, he’s been on a very fine roll since late-June, yielding two or fewer runs in each of his last seven starts. For the first time in his career, he doesn’t have a losing record, and while he’s become a decent DFS target in recent weeks, we now believe he deserves attention in redraft leagues.

Keegan Thompson, SP/RP, Chicago Cubs (ESPN: 2.9 per cent; CBS: 3 per cent): In wrapping up our trio of NL pitchers to target, we shift our attention to Thompson, who two years ago was a top 15 prospect in the Cub system. He’ll get a spot start Saturday against KC, and he’s intriguing as he’s authored a solid rookie season to date, posting a winning mark while proving tough to hit. Thompson’s command hasn’t exactly been spectacular, so that could hold him back from having a future in the rotation, but he’s an arm to watch.

In 1980, the anti-nuclear power documentary No Nukes was released, featuring a star-studded soundtrack. Among the tracks was Tom Petty and the Heartbreakers performing “Cry to Me,” written by Bert Berns, who also penned classics like “Twist and Shout,” and “Piece of My Heart.”

By RotoRob
This entry was posted on Saturday, August 21st, 2021 at 2:12 pm and is filed under BASEBALL, RotoRob, The Wire Troll. You can follow any responses to this entry through the RSS 2.0 feed. Both comments and pings are currently closed.