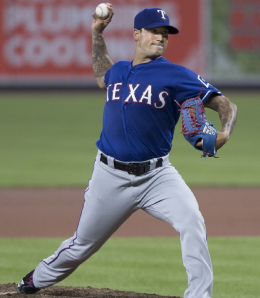 Matt Bush is the clear next-in-line for saves in Texas. (KeithAllisonPhoto.com)

Welcome back to another week of Fantasy baseball. May is nearly done now, so it may be time to cut bait on some early season disappointments and find replacements on the wire.

This week, Trevor Story snapped a season-long slump and became the first second baseman ever to homer three times and swipe a bag in the same game; Max Scherzer (oblique) will be out 6-to-8 weeks (see below for an opportunity this presents); and Jose Ramirez dodged a bullet after fouling a ball off his shin on Thursday, returning the next day with a homer and triple.

Wil Myers, OF, San Diego Padres (ESPN: 8.4 per cent; CBS: 29 per cent): While we recommended downgrading him, we were still bullish enough in our Wil Myers 2022 season preview to suggest he was capable of .250-20-10 this season. But less than a month ago, his OPS was just 464, and then just as he started showing signs of life, he hit the IL with a thumb woe and wound up missing two weeks. Since returning, Myers has been much better, finally showing a bit of pop and hitting safely in six of nine games. This may be a perfect time to pounce on a hitter who’s capable of really great power, much more production and some speed (although we’re still waiting on that this season).

Matt Bush, RP, Texas Rangers (ESPN: 0.2 per cent; CBS: 2 per cent): The last time Bush was a closing option, he struggled with the opportunity and he hadn’t recorded another save until this season. But with Joe Barlow (blister) now out day-to-day, Bush has another shot to be a ninth inning dude, and while things didn’t go well in his first chance on Wednesday, he’s been better this month, proving a bit harder to hit. Bush doesn’t have much long-term upside and things haven’t always gone well this season (see video below), but he’s pitched better than his ERA would indicate, and he’s racking up the Ks and holds, so should have some value in deeper AL-only leagues regardless of whether he’s getting saves or not.

Trevor Williams, RP/SP, New York Mets (ESPN: 0.3 per cent; CBS: 1 per cent): It’s been over four years since we last pimped Williams, and that pick turned out great as he enjoyed a career year in 2018 before regressing badly the following season. And really, he’s never come close to that level again, but with Jacob deGrom and Tylor Megill already out, and Scherzer joining that pair on the IL, Williams has some job security in the rotation (unless the Mets decide that Williams is better suited to relieve and bring up prospect Thomas Szapucki). Williams was very sharp in his start Tuesday, but bear in mind that wins may be tough to come by here given that he’s not fully stretched out to pitch deep into games. As a result, consider him simply a deep NL-only league option for the time being.

American songwriter Bobby Womack was originally the lead singer of his family’s group, the Valentinos, but the blaxploitation soundtrack album Across 110th Street is his masterpiece. From this album comes “Quicksand.”

By RotoRob
This entry was posted on Saturday, May 21st, 2022 at 12:14 pm and is filed under BASEBALL, RotoRob, The Wire Troll. You can follow any responses to this entry through the RSS 2.0 feed. Both comments and pings are currently closed.