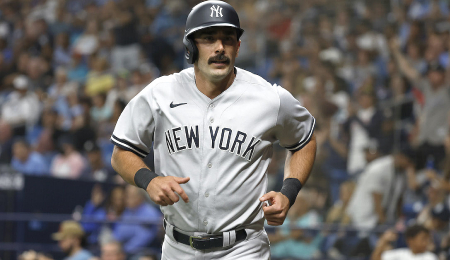 Welcome back to another week of Fantasy baseball. As we close in on the end of May, it’s time to mine the waiver wire for gems to see what you can do about making a move in the standings.

This week, the Yanks dealt with their injury issues by signing 36-year-old Matt Carpenter; Franmil Reyes (hamstring) landed on the IL, opening the door for Oscar Gonzalez; and Joe Ryan‘s superb rookie season hit a snag as he’s now on the COVID list.

Matt Carpenter, 2B, New York Yankees (ESPN: 0.5 per cent; CBS: 1 per cent): Near the end of the 2020 season, we pimped Carpenter as a sneaky play, and while he did play better in September, he wasn’t exactly great. Things went even further south last year as his hitting was awful, so small wonder he wound himself out of work as 2022 began. But the injury-riddled Yanks (who just lost Giancarlo Stanton to an ankle woe) have signed Carpenter, and he immediately rewarded their faith by drawing a walk and HBP with a pair of runs in his debut before taking another walk and going yard on Friday. Carpenter is clearly having a blast (see video below), so St. Louis’ 13th round pick in 2009 is worth a short-term add in AL-only leagues.

Harold Ramirez, OF, Tampa Bay Rays (ESPN: 0.8 per cent; CBS: 3 per cent): Over two years ago, we identified Ramirez as an MLB-ready player, but hammy woes cost him most of 2020 and a big chunk of 2021. This season, he’s seeing plenty of action at DH, OF and first base, and while his extra-base sock has dipped a bit (although it seems to have resurfaced this week), he’s upped his walk rate while racking up hits to the tune of a career-best .287 BA. Ramirez is also showing some decent glovework in the outfield and may have done enough to keep getting solid PT, so consider him an AL-only option.

Hunter Dozier, OF/1B/3B, Kansas City Royals (ESPN: 20.9 per cent; CBS: 41 per cent): Oh sure, Dozier’s career-high five-hit game helped, but before Friday he was batting .314 with six RBI and 10 runs over the last two weeks while getting more PT with Michael A. Taylor on the Covid list and Kyle Isbel now out as well. Dozier is scoring plenty of runs this season, and his power continues to bounce back after bottoming out in 2020. Not bad, considering we had our worries he would merely fill a utility role this season; now, it looks like he’ll be a useful super sub.

Jeffrey Springs, RP/SP, Tampa Bay Rays (ESPN: 7.4 per cent; CBS: 21 per cent): Springs had shown flashes from time to time, but was a veritable unknown in the Fantasy world until this year. Suddenly, he’s getting a chance to start and has really looked good, pitching well again over a career high six innings on Friday despite two mistakes that wound up in the seats. Springs has really limited baserunners, so has likely locked down a rotation gig for the time being. He’s no err… spring chicken, but has a superb changeup and deserves a spot on your team.

Christopher Morel, OF/2B, Chicago Cubs (ESPN: 3 per cent; CBS: 9 per cent): Morel is seeing action all over the diamond, including the outfield, which is good news because the Cubs have a lot of mouths to feed in the infield. He’s getting a chance to play everyday and has recently taken over as leadoff hitter. Grab Morel while you can because this kid can hit.

Kendall Graveman, RP, Chicago White Sox (ESPN: 8.4 per cent; CBS: 15 per cent): Graveman won’t get a ton of saves behind Liam Hendricks, but he plays an important role in the ChiSox pen, and will be leaned on even more now that Joe Kelly is out. Graveman has already put up a whopping 10 holds, one shy of matching his career high set last season.

Oscar Gonzalez, OF, Cleveland Guardians (ESPN: 0.2 per cent; CBS: 7 per cent): With Reyes landing on the IL, the Tribe (oops, guess we can’t call them that anymore) called up Gonzalez, who went 2-for-4 with a double in his MLB debut. Gonzalez is not a hyped prospect, but has shown a good hit tool and power in the minors, so give him a look in deep AL-only leagues.

Marwin Gonzalez, 2B/1B/3B/SS/OF, New York Yankees (ESPN: 0.4 per cent; CBS: 1 per cent): Gonzalez has pretty much been in free fall offensively since 2019, and his speed is a liability now. However, he’s hitting the ball hard half the time, qualifies all over the field and is now playing regularly with Josh Donaldson (shoulder) out. Gonzalez has responded to the consistent PT with two runs on Thursday and knocks in three straight before going hitless on Friday, so consider him as a short-term option.

Kole Calhoun, OF, Texas Rangers (ESPN: 15.3 per cent; CBS: 44 per cent): Few hitters are more scorching than Calhoun, who’s slugging .704 in May thanks to 10 extra-base knocks over the last couple of weeks. He was hitting just .150 in early-May, but a .404 stretch over the last two weeks jacked his BA over 110 points.

Johnny Cueto, SP, Chicago White Sox (ESPN: 22.1 per cent; CBS: 42 per cent): Cueto was recently recalled from Triple-A and all he’s done since is toss 12 shutout innings over two starts. Grab him while he’s rolling.

Barenaked Ladies got their start in 1988 out of Scarborough, Ontario, and are still at it today. In 2001, they released their first compilation album, Disc One: All Their Greatest Hits (1991-2001), which included a new radio edit of “Pinch Me.”

By RotoRob
This entry was posted on Saturday, May 28th, 2022 at 11:56 am and is filed under BASEBALL, RotoRob, The Wire Troll. You can follow any responses to this entry through the RSS 2.0 feed. Both comments and pings are currently closed.