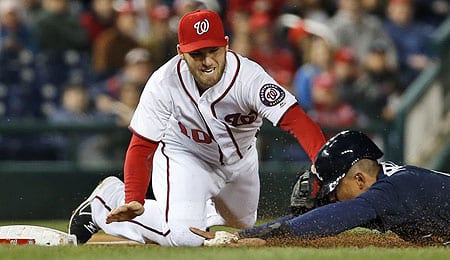 Welcome back to another week of Fantasy baseball. We’re into July, now just nine days from the Home Run Derby! Let’s see if we can help you find some help on the wire to fan your championship hopes.

This week, David Price’s rocky relationship with the Boston media has gotten even worse after a verbal spar with Dennis Eckersley; things got even crazier in San Diego Friday, as Padre manager Andy Green got shoved by Dodger manager Dave Roberts; and two rare pieces of Babe Ruth memorabilia sold for a combined total of nearly $4.4 million.

Stephen Drew, 2B, Washington Nationals (ESPN: 0.6 per cent; CBS: 2 per cent): With Trea Turner (wrist) out for the next two months or more and the Nats reportedly not shopping for a replacement, Drew has been thrust back into a starting role. In limited action this year, Drew has been very productive, and the veteran has always had some pop (see video below), so makes for a fine pickup for those seeking middle infield help. The only question here is whether he can maintain the production in a larger role, as it’s been a couple of years since he saw full-time duty.

Nick Williams, OF, Philadelphia Phillies (ESPN: 2.4 per cent; CBS: 10 per cent): Likely just a deep/keeper league option, Williams has been recalled by the Phillies, and has managed hits in each of his first two MLB games so far. One of Philadelphia’s top prospects, he should receive plenty of chances down the stretch as the team is very much out of it this year and needs to assess its young talent for 2018.

Tyler Wade, SS, New York Yankees (ESPN: 3.3 per cent; CBS: 7 per cent): Wade has the speed (24 steals in 71 games at Triple-A this year) to provide value in a utility role, and now that he’s up with the Yankees, he’s putting that skill to good use with four runs in his first four games. He’s Ben Zobrist Lite, and that has some Fantasy use in deep AL-only leagues because of the positional flexibility Wade is going to provide.

Brice Turang, SS, Santiago (CA) High School (ESPN: NA; CBS: NA): In a dynasty league and out of it this season? Hey, it’s never too early to think about the future, and Turang — expected to be the No. 1 overall pick in the 2018 draft — represents the future. In his interview with MLB.com at the Team USA selection camp, the kid thinks a lot of things are awesome and exciting, but it’s clear he has plenty of confidence, too. Expect to hear a lot about Turang over the next few years.

Joey Rickard, OF, Baltimore Orioles (ESPN: 0.2 per cent; CBS: 1 per cent): Sure, this is a dude that has pretty much been off the Fantasy radar so far, but in a very deep AL-only league, he could have some value. Rickard is 4-for-11 over the last three games, with two doubles and a big home run on Friday, but until his strike zone judgment bounces back to what he showed as a rookie, his upside is capped.

Ketel Marte, SS, Arizona Diamondbacks (ESPN: 1 per cent; CBS: 6 per cent): Marte is back in the bigs with Nick Ahmed landing on the DL. Again, this is merely a deep league play at this point, but Marte was a big part of that huge offseason deal between the D-Backs and Mariners, and we really thought he was going to be a key member of the team’s future. Considering what a storm he was hitting up in Triple-A, perhaps that journey starts now.

Michael Taylor, OF, Washington Nationals (ESPN: 36.4 per cent; CBS: 44 per cent): Drew has taken over shortstop in Washington with Turner out, but Taylor has also benefited, moving up from his normal spot near the bottom of the order to the two-hole in the first game, and then batting leadoff on Saturday, Taylor is getting it done, with three hits and a walk over the first two games. He had a really crappy start to the season, but has gotten better and better as the weather has warmed up and finally seems to be enjoying that long-awaited breakout season. This development can only help.

Keone Kela, RP, Texas Rangers (ESPN: 9.1 per cent; CBS: 19 per cent): With Matt Bush struggling, Texas will go to a closer-by-committee approach, but Kela looks like the best bet to earn saves.

Clint Frazier, OF, New York Yankees (ESPN: 7.5 per cent; CBS: 34 per cent): With Dustin Fowler out for the year, the Yanks have recalled one of their top prospects in Frazier, who is among the IL leaders in doubles. Frazier wasted little time in making an impact in his debut Saturday, doubling and homering.

Anibal Sanchez, RP, Detroit Tigers (ESPN: 2.6 per cent; CBS: 7 per cent): His change-up may not be able to break a pane of glass, but Sanchez has looked like a revitalized pitcher since moving back into the rotation. He spent most of his time in the rotation last year, but was slaughtered; this year, he’s been very hittable out of the pen, so this turnaround has been a very pleasant surprise.

Alex Verdugo, OF, Los Angeles Dodgers (ESPN: 0.6 per cent; CBS: 7 per cent): Verdugo just had a 20-game hitting streak at Triple-A snapped. It’s nearly time to see what he can do in the majors.

Cory Spangenberg, 3B, San Diego Padres (ESPN: 1.8 per cent; CBS: 4 per cent): Spangenberg has driven in five runs in the last six games, although he was out of the lineup on Saturday, so is likely just an NL-only league option at this stage.

By RotoRob
Tags: Stephen Drew, Washington Nationals
This entry was posted on Sunday, July 2nd, 2017 at 4:07 pm and is filed under BASEBALL, RotoRob, The Wire Troll. You can follow any responses to this entry through the RSS 2.0 feed. Both comments and pings are currently closed.