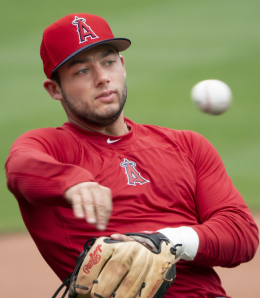 David Fletcher will be out for a while. (KeithAllisonPhoto.com)

We’ve never really paid much attention to Angel infielder David Fletcher — to our detriment in 2019 and 2020, but not so much since then.

We’re not sure why he didn’t enter our consciousness more, but we’re here with a closer look now to rectify this.

In his first full campaign, he showed more extra-base sock and a vastly improved walk rate, and while he may not have been much of a help to Fantasy owners in homers or steals, he offered enough in runs and BA to be useful, and even valuable in OBP leagues. Fletcher’s contact skills were off the charts, with only Hanser Alberto proving harder to strike out in 2019. Oh, and did we mention Fletcher has some serious defensive chops (at least in the virtual world… see video below)?

In 2020, he took his on-base skills to the next level, proving his emergence the season before was no fluke. By this point, Fletcher looked like the new Mark Loretta (a player who, back in the day, was once a hero for the Los Angeles Dodgers).

But then came last year, and while Fletcher saw more action than ever, actually proved more useful as a source of speed (15 thefts), and improved his contact rates, his chief allure — on-base skills — regressed dramatically, pulling most of his value with it.

So far this season, things have gotten even worse as his OBP is just .220, and perhaps we now know why:

#Angels INF David Fletcher had surgery today to repair the adductor muscles, which are in hip area near groin, in both legs. Will be out for “a couple months,” according to team.

It’s quite reasonable to assume that a core muscle problem like this was behind Fletcher’s declining results. Which begs the question: when he returns around the All-Star break, could he be closer to his 2019-20 form? If so, this is a second half sleeper to consider.

In the meantime, Luis Rengifo — one of a few Angels that has a chance to take advantage of Fletcher’s injury — is a whole lot more interesting. Rengifo has posted a .375 OBP in a very small sample size this year, but considering his minor league career mark is .361, it’s not out of scope. Rengifo is young enough to have upside, and he’s flashed more power and speed potential than Fletcher.

Still, assuming Fletcher isn’t a write-off for 2022, we’ll be following his progress very closely as the second half nears as he has the potential to be a very fruitful addition for the stretch run.

Originally from London, England, Deep Purple helped develop both heavy metal and hard rock. In 1971, the band planned to record Machine Head at the Montreux Casino in Switzerland, but the building burned down during a Frank Zappa and the Mothers of Invention show. Hence the backstory to Deep Purple’s classic “Smoke on the Water,” one of the greatest songs in rock history.

By RotoRob
This entry was posted on Monday, May 16th, 2022 at 4:56 pm and is filed under BASEBALL, Player profile, RotoRob, Scouting Report. You can follow any responses to this entry through the RSS 2.0 feed. Both comments and pings are currently closed.