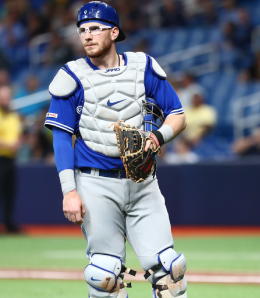 Danny Jansen got hurt too early for anyone to notice he was red hot. (Kim Klement-USA Today Sports)

Welcome back to another week of Fantasy baseball. May has arrived, and while there’s still plenty of time to figure out if your team is a contender or not, there’s no excuse for not mining the waiver wire.

This week, Shohei Ohtani channeled his inner Babe Ruth, putting on a two-way clinic in Fenway Park; Big Twins investment Carlos Correa dodged a broken finger, but is day-to-day; and the Matt Brash as a starter experiment is over in Seattle.

Danny Jansen, C, Toronto Blue Jays (ESPN: 6.5 per cent; CBS: 18 per cent): It’s been nearly three years since we last recommended Jansen, and it was a good call as he saw a ton of action in July and remained productive in August before seeing a downturn in his counting cats in September. He was even more productive in 2020 and then again in 2021 — despite dealing with injuries. Jansen began this year on fire (see video below) before an oblique injury sent him to the IL. The good news is two-fold: he’s nearing a return (currently traveling with the team), and his early-season exploits didn’t last long enough for him to get scooped up in tons of leagues, so he remains widely available. Jansen, who really knows how to think the game, was being attacked with more fastballs than ever early on, so let’s hope that continues upon his return and he can pick up where he left off.

Shea Langeliers, C, Oakland Athletics (ESPN: 0.2 per cent; CBS: NA): Given the presence of Langeliers and William Contreras in the system, we were shocked when Atlanta gave Travis d’Arnaud an extension last season. Well, that issue’s been resolved with Langeliers getting shipped to Oakland, which will help expedite his arrival in the majors. An eight-game hitting streak (snapped on Friday) and a video game-like power display so far this season (10 homers in 25 games) will help. You need to grab Langeliers now, especially in dynasty formats. Oh, did we mention he’s known more for his glovework behind the plate?

Josh Winder, SP, Minnesota Twins (ESPN: 6 per cent; CBS: 11 per cent): Winder sure has taken advantage of injuries in Minny, getting the W in his first MLB start last weekend, and then looking even better in another victory on Friday. Undefeated through five appearances and two starts so far, Winder has racked up a sweet 1.64 ERA and 0.72 WHIP, showing a very strong slider, changeup and curve. The kid is an intriguing streaming option, and making his case to stick in the rotation.

Glenn Otto, SP, Texas Rangers (ESPN: 2.4 per cent; CBS: 9 per cent): One of the key components the Rangers received last summer in the Joey Gallo deal, Otto had a rough time down the stretch. However, Otto has looked like a different pitcher early on this year, going undefeated through two solid starts (2.89 ERA, 0.96 WHIP), albeit with a lower K rate. He’s getting more batters to swing at pitches outside the zone, and that’s a promising trend, so consider him an option in AL-only leagues.

Robert Hassell III, OF, San Diego Padres (ESPN: 0.5 per cent; CBS: NA): Hassell was No. 14 on our Top 100 Prospects list this spring, but the way he’s making a mockery of High-A right now suggests he’ll be among the top five in 2023. He’s off to a red hot start, but is hitting way fewer flyballs — which makes the power surge even more impressive. Hassell’s piling up the runs and ribbies, so expect a promotion to Double-A very soon. It’s not inconceivable that he could help you this season, but more likely in 2023, making him a must-own dynasty asset.

Jarren Duran, OF, Boston Red Sox (ESPN: 1.0 per cent; CBS: 16 per cent): Duran is a great long-term asset, but wasn’t necessarily expected to play a big role for Boston this year after a rather unproductive debut in 2021, one that he described as a “complete failure.” However, with Enrique Hernandez (Covid) out, Duran is getting another shot, and if his early work at Triple-A is any indication, he’s far more ready this time around. All Duran has done is score a run per game while batting nearly .400, so we’re definitely curious to see how he fares in the bigs this time around. How about a triple and a run in his season debut on Friday? Grab this kid while you can.

Erik Swanson, RP, Seattle Mariners (ESPN: 0.3 per cent; CBS: 1 per cent): Through his first 11 appearances, Swanson has yet to be scored on as he sets a trajectory for what is looking like a career season (he’s already set a new personal best in WAR). He’s been elite to date and with Ken Giles still three to four weeks away and Matthew Festa hitting the IL, the Seattle closing situation is wide open, so Swanson could offer surprise value over the short term.

Known simply as “Donovan,” Scottish musician Donovan Phillips Leitch has been at it since 1964. In 1969, his first best-of effort was released as Donovan’s Greatest Hits, the first side of which closes with the classic “Season of the Witch.” The song was originally released on the 1966 album Sunshine Superman, and is considered one of the earliest psychedelic pop tunes ever.

By RotoRob
This entry was posted on Saturday, May 7th, 2022 at 12:08 pm and is filed under BASEBALL, RotoRob, The Wire Troll. You can follow any responses to this entry through the RSS 2.0 feed. Both comments and pings are currently closed.