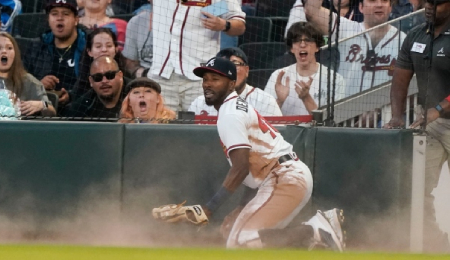 Travis Demeritte is heating up for the Braves. (The Canadian Press)

Welcome back to another week of Fantasy baseball. The first month is just wrapping up, so there are still tons of gems to be found. Use your league waiver wire, peeps!

This week, Nolan Arenado and Genesis Cabrera were both suspended for their parts in a bench-clearing brawl; Ronald Acuna Jr. shook off concerns about his running game with two steals in his long-awaited return; and Manny Pina (wrist) landed on the IL, leading to the promotion of catching prospect William Contreras.

Madison Bumgarner, SP, Arizona Diamondbacks (ESPN: 22.5 per cent; CBS: 47 per cent): Heading into the 2020 season, we expressed concerns how Bumgarner would fare in a much less-friendly pitcher park, but it was hard to predict that he’d struggle to win this badly and have a tougher time throwing the ball by hitters. Despite a ton of losses, last year was better, but this season… wow. Bumgarner looks fantastic early on, with back-to-back scoreless outings before Friday and a ridiculous 1.17 ERA through five starts. On Friday, he even managed to earn his first win against a very hot St. Louis lineup. MadBum’s velocity is back near its 2019 levels, and he’s gone back to his fastball more after three years of declining usage. Better yet, his changeup has returned to being a strong offering after bottoming out last season. Sure, lots of luck has helped fuel this great start, but it looks like Bumgarner is again a very viable Fantasy option, one with great taste in music, to boot (check out his warm-up tune in the video below).

Travis Demeritte, OF, Atlanta Braves (ESPN: 0.3 per cent; CBS: 1 per cent): Originally drafted as a shortstop, it was clear even then Demeritte wasn’t going to stick there, and by the time he got to the majors, he had shifted to outfield. He’s received less and less opportunity each season since his debut in 2019, but with Eddie Rosario (eye) out for 8-12 weeks, the PT is suddenly available, and — so far — Demeritte has hit well enough to continue to get regular at-bats. On Friday, he took over the leadoff spot and delivered with two hits, two runs, a dinger and a walk. Pitchers have been attacking Demeritte with fewer fastballs than ever, so perhaps he’s being taken a bit more seriously as a hitter. Perhaps you should follow suit for the next few weeks.

Elieser Hernandez, SP, Miami Marlins (ESPN: 19.9 per cent; CBS: 27 per cent): Given an ERA close to 6.00, at first blush, Hernandez is off to a poor start despite a 2-1 record (after earning another win on Friday). However, his xERA is just 3.50, so he’s clearly been unlucky. And with nearly a K per frame and velocity as high as it’s ever been, he looks like a very nice buy low option.

Scottish dream pop band Cocteau Twins got their start in 1979, and remained active until 1997. In 1993, they released their seventh album, Four-Calendar Cafe, featuring the track “Squeeze-Wax.”

By RotoRob
This entry was posted on Saturday, April 30th, 2022 at 11:05 am and is filed under BASEBALL, RotoRob, The Wire Troll. You can follow any responses to this entry through the RSS 2.0 feed. Both comments and pings are currently closed.