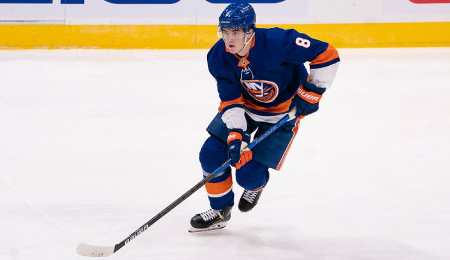 The 2021-22 NHL regular season is done, so while you enjoy some exciting playoff action and get into some sports betting Canada-style, let’s take a look back at which of our Fantasy hockey waiver wire recommendations worked out best from the current campaign.

Using the wire can provide value in tons of ways. Sometimes, it offers temporary help for an injury issue or it’s simply a case of jumping on a player delivering short-term value. But when you pick up a player and he sticks on your team for the entire season — or even most of it — and contributes throughout, that is the true definition of waiver wire gold.

Naturally, we had plenty of misses among our picks, and because of the bi-weekly nature of our column, it means that some hot free agents got scooped up and exceeded our ownership percentage limit of 50 per cent days before we could tout them. But the fact is that if you managed to wind up with two or three of these guys on your team, you probably had a good time this season.

Without further ado, we present the 2021-22 NHL Wire Troll All-Star Team, listed in order of the value they provided…

Noah Dobson, D, New York Islanders (Week 11): Although we didn’t recommend him until Christmas, when we called his development one of the few bright spots in an otherwise tough season for the Islanders, Dobson emerged as the season’s best waiver wire find. At the age of 22, he became a 50-point blueliner, one who should be a staple of the Isles’ D corps for many years. Dobson became a full-time player this season and anchored the power play, taking a massive step forward after showing hints of greatness in 2020-21. He finished strong (eight points over the final seven games) and because he mostly flew under the radar, was a solid DFS play as well. Dobson is a great skater and very mobile defenseman with slick moves and a shot to match (see video below), but he won’t be sneaking up on anyone next season after this huge breakout.

Jake Oettinger, G, Dallas Stars (Week Seven): This youngster proved to be the best goalie available off the wire this season, running with his first chance to be a starter when injuries struck, and opening a lot of eyes along the way. Oettinger finished strong, reaching the 30-win mark while losing just 15 times. He’s been the starter in the playoffs, and given his inexperience, we thought it would be fascinating to see how he would do against a very powerful offensive team in Calgary; so far, the results are very promising.

Evan Rodrigues, C, Pittsburgh Penguins (Week One): Our top early-season recommendation, Rodriguez enjoyed a breakout campaign in which he played every game and saw his most ice time yet while recording career bests across the board. Given that he had only managed 34 goals over six previous seasons, he’s put himself in position to earn some serious green as an UFA this summer.

Tanner Jeannot, LW, Nashville Predators (Week 11): Jeannot is one tough customer, leading the toughest team in the NHL in penalty minutes this season. But apparently he can score plenty of goals as well, including five game-winners. That plus/minus could use some work, but we’re looking at the new prototypical power forward.

Damon Severson, D, New Jersey Devils (Week 13): Saskatchewan native Severson enjoyed a career season, reaching 35 assists for the first time while setting a new person best in points. He came up huge on the power play, and his effort was rewarded with a spot on Team Canada at the World Hockey Championship. Severson is a good sized defenseman (6’2″, 205), but can get around the ice quite well.

Chandler Stephenson, C, Vegas Golden Knights (Week One): Another Week One gem, Stephenson has gotten better each season he’s been with Vegas, leading the team in assists and ranking second in scoring in 2021-22. While his +5 rating was disappointing, he ripped more shots on goal than ever and continued to be a positive play-driver from a Corsi standpoint.

Reilly Smith, RW, Vegas Golden Knights (Week One): We identified a pair of Golden Knights in the opening week that paid big dividends this season. Smith, an excellent defensive forward, is sure to get plenty of attention in free agency after enjoying a solid bounce-back season — despite missing the final 24 games with an undisclosed injury.

Valeri Nichushkin, RW, Colorado Avalanche (Week Nine): Yet another of our waiver wire All-Stars that’s an impending UFA, Nichushkin posted his first 25-goal season, giving the Avalanche another dangerous weapon. He produced more on the power play than ever before, while also delivering five game-winning tallies. After massively outperforming expectations, Nichushkin found himself on Colorado’s top line to start the playoffs.

By RotoRob
This entry was posted on Monday, May 9th, 2022 at 7:16 pm and is filed under HOCKEY, RotoRob, The Wire Troll. You can follow any responses to this entry through the RSS 2.0 feed. Both comments and pings are currently closed.