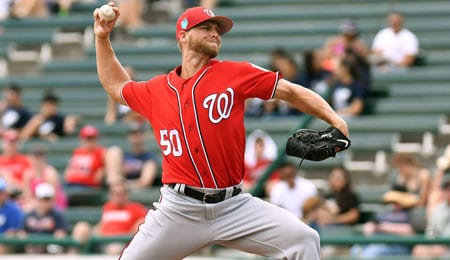 Welcome back to another week of Fantasy baseball. The Yankees are on fire right now, and what looked like a two-horse race in the AL East is turning into a bit of a runaway. In fact, it was so close at one point that we were tempted to consult timeform.com for the odds.

This week, Cubs manager Joe Maddon lost his shit over the Pirates throwing up and in, getting an early shower as a result; Christian Yelich is confident the Home Run Derby won’t screw up his swing; and AJ Pollock (elbow) will return to action for the Dodgers after the All-Star break.

Austin Voth, SP, Washington Nationals (ESPN: 5.1 per cent; CBS: 12 per cent): Washington’s fifth rounder in 2013, Voth hasn’t really spent much time in the Fantasy spotlight, but since his recall to take Jeremy Hellickson‘s spot in the rotation, he’s shown more velocity and the results have improved as a result. Voth had an unremarkable debut last year, split between the bullpen and rotation (four appearances in total), but has improved his hit rates this season, looking especially sharp in his season debut against the Braves two weeks ago. His record and ERA at Triple-A were not great, so there’s not much upside here, but as long as he has a gig, he’s worth considering. Remember that Voth was an up and coming prospect heading into 2017, but got knocked off track with a poor season. Armed with a deceptive delivery, he has a real chance here to stake his claim to a rotation spot. He’s certainly caught Manager Davey Martinez‘s eye with his aggressiveness (see video below).

Danny Jansen, C, Toronto Blue Jays (ESPN: 30.6 per cent; CBS: 34 per cent): Last June, we trumpeted the impeding arrival of Jansen in Toronto, and while it didn’t happen until August, he hit decently after getting promoted to the bigs. This year has been a different story as he’s struggled badly until about two weeks ago. Jansen is scorching now, having hit safely in eight of the last nine games, homering in three straight (four dingers in total), and putting up three straight multi-RBI efforts. We were at the game on Thursday to witness his first career multi-homer game, and let us tell you — Jansen was locked in, driving the ball with authority and confidence each time he was at the plate. Absent most of the season, the extra-base pop is really starting to show up now, so grab him while you can.

Gabriel Moreno, C, Toronto Blue Jays (ESPN: NA; CBS: unowned): If Jansen is the Toronto catcher of the present, Moreno is making his case as the catcher of the future, and establishing himself as a nice dynasty league option. Just 19, Moreno is already making his full-season ball debut and with a .333 BA over the last 10, he’s now flirting with a .300 BA through 35 games. His contact rate is off the charts for such a youngster.

Derek Hill, OF, Detroit Tigers (ESPN: unowned; CBS: unowned): Detroit’s 2014 first rounder has struggled to turn his tools into production, but he’s piling up the runs in his first season at Double-A. Hill remains a project, but is flashing more extra-base sock this year, so dynasty owners need to keep an eye on his progress.

Wander Franco, SS, Tampa Bay Rays (ESPN: 2 per cent; CNS: 26 per cent): A long-time dynasty asset, Franco has ascended to the No. 1 prospect still in the minors. Before long, Montreal/Tampa Bay fans will be admiring his performance on a daily basis, and he got a step closer in late-June with a promotion to High-A. Franco’s ISO — impressive as it was at Class-A — has been off the charts since his promotion, so he may not be long for this level. His hit tool and raw power are elite, so the only concern is his fielding (which still grades out at 50) possibly forcing a move to second or third base. Yes, we’re nitpicking here.

Danny Salazar, SP, Cleveland Indians (ESPN: 1.6 per cent; CBS: 11 per cent): Salazar’s rehab from a shoulder injury is coming along nicely (fanning five in 1 2/3 IP on Sunday), so he’s expected to return to the bigs before August. Remember that when he last pitched in 2017, he fanned nearly 12.7/9, so you cannot ignore him.

We’ve got yet another tune from Bruce Cockburn‘s Christmas, comprised almost entirely of traditional songs. Here’s “Joy to the World,” the best-known work of Lowell Mason, a 19th Century American church music composer.

By RotoRob
Tags: Austin Voth
This entry was posted on Saturday, July 6th, 2019 at 9:24 am and is filed under BASEBALL, RotoRob, The Wire Troll. You can follow any responses to this entry through the RSS 2.0 feed. Both comments and pings are currently closed.