The Wire Troll: Calle Jarnkrok Could Thrive in Calgary 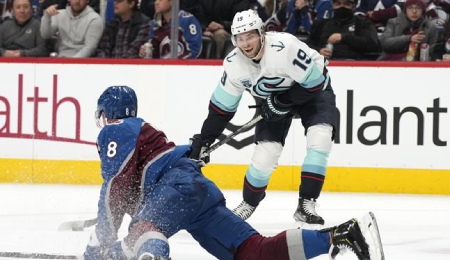 Calle Jarnkrok (right) has a chance to produce in Calgary. (The Canadian Press/AP-David Zalubowski)

Welcome back to another week of Fantasy hockey. The trade deadline is nearly here, so pay attention to transactions that open up opportunities for off-the-radar players.

This week, the trades began in earnest, with the Hawks getting a massive return for breakout forward Brandon Hagel; Auston Matthews earned himself a suspension for a careless cross-check; and Claude Giroux received a hero’s tribute for his 1,000th — a probably last — game with the Flyers.

Calle Jarnkrok, C, Calgary Flames (ESPN: 1.7 per cent; CBS: 3 per cent): Jarnkrok played some of his best hockey when he was teamed with Mike Ribeiro in Nashville back in the day, but has always been a solid playmaker. Jarnkrok was having a decent season with the Kraken before getting dealt this week to Calgary, where he now has goalscorers Tyler Toffoli and Andrew Mangiapane as his wingers. This is a far more favourable situation for the versatile Janrkrok (as you can see in the video below, he’s already finding chemistry with his new line, just no luck), so he could be poised for a big finish.

Maxim Mamin, RW, Florida Panthers (ESPN: unowned; CBS: unowned): Mamim is currently playing on Florida’s top line and should get even more PT with Frank Vatrano being traded to Rangers this week. Mamim is enjoying his finest season (5-5-10 in 30 games), but really shines in the advanced metrics, sporting a 53.66 FF percentage, a 62.5 GF percentage and a 59.06 SCF percentage. Hell, he’ll even drop the gloves on occasion.

Paul Stastny, C/LW, Winnipeg Jets (ESPN: 5.9 per cent; CBS: 17 per cent): We’re a bit surprised to see Stastny available in as many leagues as he is considering he’s currently playing on Winnipeg’s top line and is averaging almost a point per game in March. Further, he stands to gain even more value if Andrew Copp is dealt as rumoured.

Adam Henrique, C, Anaheim Ducks (ESPN: 15.9 per cent; CBS: 17 per cent): When we last checked in on Henrique, he was one of the few bright spots on the Ducks, but things went south for him last season. This season, he’s bounced back and is scorching now, dropping two dimes Tuesday for 13 points over his last 13 games. Playing on the No. 1 line, the veteran is getting his most ice time since his first campaign with the Ducks in 2017-18.

Adam Scheel, G, Dallas Stars (ESPN: NA; CBS: Unowned): Ben Bishop was never able to come back from his knee injury, Anton Khudobin (hip surgery) is done for the season, and Braden Holtby is banged up. This leaves Scheel as the current backup in Dallas, and while the youngster awaits his first NHL action, the former University of North Dakota star had played decently in the AHL this season. Let’s see what the kid can do.

Dysin Mayo, D, Arizona Coyotes (ESPN: 1.3 per cent; CBS: 4 per cent): When he was drafted, we liked Mayo as a two-way puck-moving defender, but it’s taken him until this season to finally make the NHL. It’s been worth the wait; the smart blueliner put up five points over a four-game stretch earlier this month and has been playing on the No. 1 pair while Jakob Chychrun (ankle) is out for close to two weeks. If Chychrun gets traded as expected, Mayo’s role will be solidified.

Taylor Raddysh, RW, Chicago Blackhawks (ESPN: 0.1 per cent; CBS: 6 per cent): One of the components the Hawks received in the big trade with Tampa Bay, Raddysh is still young enough to have upside. Assuming he gets more PT in Chicago, he’ll be worth tracking — especially if he gets reunited with his junior linemate, Alex DeBrincat. Don’t forget that Raddysh averaged over a point per game in the AHL last season.

Brandon Hagel, LW, Tampa Bay Lightning (ESPN: 4.5 per cent; CBS: 18 per cent): Despite missing time with a shoulder injury, Hagel still managed to pot 21 goals before being dealt to the Lightning this week. At age 23, he was young enough to be part of Chicago’s future, but all that draft capital was too good to pass up. Expect Hagel to take it up a notch playing with much more talented linemates.

Jack Studnicka, C, Boston Bruins (ESPN: 0.1 per cent; CBS: 3 per cent): It’s deja vu all over again. Two and a half years ago, we pimped Studnicka when he was replacing an injured Patrice Bergeron. Well, Bergeron is out again, and Studnicka is going to get a chance on the top line. Okay, so Studnicka’s advanced metrics suggest a below replacement level player, but this is a golden opportunity for a youngster who’s been very productive in the AHL, and the fact he logged a helper on Friday was a great sign.

Erik Kallgren, G, Toronto Maple Leafs (ESPN: 6.1 per cent; CBS: 19 per cent): Wow, has Kallgren ever looked brilliant to begin his NHL career, posting a 1.20 GAA through two and a half games. Could he be the answer the Leafs have been seeking? It might be worth picking Kallgren up to find out.

English new wave band A Flock of Seagulls formed in 1979, and other than a two-year break in the latter stages of the 1980s, they’ve remained active since. Their huge breakout came in 1982 with the international hit “I Ran (So Far Away),” the second single from their eponymous debut album.

By RotoRob
This entry was posted on Saturday, March 19th, 2022 at 11:01 am and is filed under HOCKEY, RotoRob, The Wire Troll. You can follow any responses to this entry through the RSS 2.0 feed. Both comments and pings are currently closed.