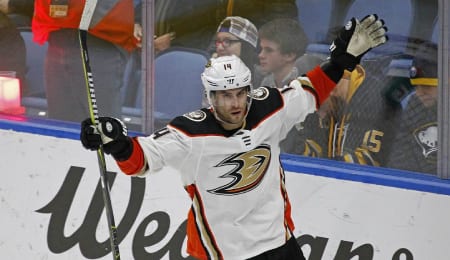 Adam Henrique was a bright spot in a tough season for the Ducks. ((Jeffrey T. Barnes/AP)

Since the 2016-17 season, when they won 46 games and made it to the Western Conference Finals, the Anaheim Ducks have pretty much been in free fall. Last season, they looked a smidge better down the stretch (3-3-1 in March), but still finished in 27th place overall — the worst showing in franchise history.

This team really needs offensive help, and desperately must improve its special team play next season.

In free agency, the Ducks added undrafted high-scoring junior forward Maxim Golod, but he may remain in junior for another season. They also brought back Derek Grant, whom they dealt to Philadelphia at the deadline, but he’s a third-line centre at best so really won’t add much to the attack. Centre Vinni Lettieri was signed, and while he’s proved he can score in the AHL, he’s unlikely to provide more than organizational depth. Centre Andrew Poturalski, another addition, falls in the same category, but may have some upside.

They beefed up their defense with the signings of Kevin Shattenkirk and Andy Welinski (who will provide AHL depth).

However, none of the additions will help much offensively, although Shattenkirk may boost a power play that was the league’s second worst behind woeful Ottawa. Here’s hoping top prospect Trevor Zegras is ready to take on a full-time NHL role next season, because he’s going to be a difference maker in time — especially once he adds some weight.

Centre Adam Henrique proved to be one of the best waiver wire adds of the season, winding up with 26 tallies — his best output yet as a Duck and top goal scoring season since 2015-16. Despite reduced power play output (we did mention how crap the Ducks’ PP was, right?) and only a slight increase in ice time, he easily had his best season with Anaheim, adding a 52.1 Corsi For percentage (good for a career-best 5.5 CF rel). In fact, had the season played out, Henrique had a decent chance to break his career high in points, especially considering how hot he was at the time of the pause. At age 30, he clearly still has gas left in the tank (especially if he keeps getting to play with Ondrej Kase — see video below), so expect Henrique to go somewhere between round 15 and 20 in next season’s drafts.

Jacob Larsson, the team’s 2015 first rounder, played more games last season, and had career highs in goals, assists and points, but he really isn’t progressing. He actually saw less ice time, had his worst plus-minus yet, and struggled to a career-worst 41.1 CF percentage. But perhaps that was a product of Anaheim struggling as a team? Uh, no. Larsson’s had a -9.9 CF percentage relative to his teammates, underscoring just how tough a time he’s had securing a consistent role in the NHL so far. Time remains on Larsson’s side, but the addition of Shattenkirk will ensure he’s capped at a third pair role for the time being. The fact Anaheim took blueline Jamie Drysdale sixth overall in the draft earlier this month doesn’t help Larsson’s long-term prospects, either.

To be fair, this is really more about the effects of Father Time, but Ryan Getzlaf‘s offensive regression continued last season and it’s now been five straight seasons that he’s failed to top 15 goals. Worse yet, his work as a facilitator has slipped even more, as his assist total has dropped from 58 to 50 to 34 to just 29 in 2019-20. Getzlaf’s ice time has waned the last couple of years and he’s a cumulative -35 over the past two seasons. He’s been an offensive force since he entered the league 15 years ago, and he’s still a positive play driver, but he’s not going to suddenly experience a renaissance. His days as a Duck are likely numbered, and he’s a strong candidate to be dealt next season should the team fail to rebound to playoff contention.

Arrested Development was founded by Speech and Headliner in the late-’80s. Included on its debut album 3 Years, 5 Months and 2 Days in the Life of… was a short, mostly spoken word piece called “Blues Happy.”

By RotoRob
This entry was posted on Saturday, October 17th, 2020 at 10:00 am and is filed under Good Bad and Ugly, HOCKEY, RotoRob. You can follow any responses to this entry through the RSS 2.0 feed. Both comments and pings are currently closed.