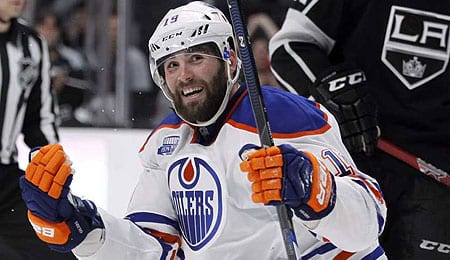 Patrick Maroon has been a different player since coming to Edmonton. (Alex Gallardo/Associated Press)

Welcome back to another week of Fantasy hockey. RotoRob is filling in for Dakota this week, so we’ll do our best to live up to his lofty standards. Speaking of lofty standards, how awesome was the WJC Gold Medal game between Canada and the U.S., and how lame was it that a classic like that was decided by a shootout?

Last week, the Blue Jackets’ 16-game win streak finally ended; former Bruin great Milt Schmidt — who had been the NHL’s oldest living ex-player — passed away at the age of 98; and Montreal was dealt a blow when Brendan Gallagher broke his hand and needed surgery, a procedure that will sideline him for at least eight weeks.

Patrick Maroon, LW, Edmonton Oilers (ESPN: 19.3 per cent; CBS: 38 per cent): Maroon has size (6’3″, 229), is tough (48 PIMs in 40 games, and even willing to drop the gloves with a man-beast like Zdeno Chara — see video below) and is seriously skilled (after a hat trick Thursday he now has five goals and an assist with a +6 ranking over the last five games). He’s stayed healthy this season and seems to have really found himself in Edmonton, having already established a new career high in goals less than halfway through his first full season as an Oiler (remember that after being traded to Edmonton at the end of February last year, all he did was score eight goals in 16 games).

Mike Ribeiro, C, Nashville Predators (ESPN: 17.8 per cent; CBS: 21 per cent): Ribeiro still plays with Calle Jarnkrok, but now centres the third line for the Preds. And while Ribeiro’s goal total keeps shrinking, he can still drop some dimes as evidenced by three helpers over the last five games. Better yet, his plus/minus is finally heading in the right direction after a tough first half. Ribeiro seems to have been playing since Nashville’s favourite daughter (Bettie Page) was last popular, but apparently he can still provide an offensive contribution from time to time.

Nathan Beaulieu, D, Montreal Canadiens (ESPN: 12.9 per cent; CBS: 34 per cent): Young puck-moving blueliner Beaulieau is starting to flex his offensive muscles, potting a goal and two power play assists on Wednesday, giving him a 1-4-5, +3 line over the last four games. Seeing time on the first power play unit is sure to get this kid’s numbers rocking, and the fact he’s now +15 on the season (tied for 15th in the NHL) is a serious bonus.

Sven Baertschi, LW, Vancouver Canucks (ESPN: 12.9 per cent; CBS: 20 per cent): Despite being shut out Friday against Calgary, Baertschi is red hot, with four goals and a pair of helpers over the last five games. Oh, and how about a +7 mark over this stretch? After breaking out for 15 goals last season, Baertschi has taken his game to a whole new level and could flirt with 25 markers this season, possibly more if he stays hot. Just don’t expect much help in the PIM department — he has zero this season after recording just 40 minutes over his first five seasons combined.

Bo Horvat, C, Vancouver Canucks (ESPN: 39.7 per cent; CBS: 45 per cent): Another young Canuck forward that’s heating up is Horvat, currently riding a six-game point streak (2-5-7, +3). His emergence has helped Vancouver really start rolling, with six straight wins to put the Canucks right on Calgary’s tail while even gaining ground on still-hot Edmonton. Horvat just keeps getting better and better each season, and it will be fascinating to see where the 2013 ninth overall pick’s ceiling lies.

Connor Brown, RW, Toronto Maple Leafs (ESPN: 12.6 per cent; CBS: 18 per cent): Over his last seven games, Brown has ripped five goals and added four assists including scoring one goal in each of his last three games. To say this second year forward is starting to come into his own is an understatement, and we’re really bullish on the massive uptick in his shots on goal this season. Just 22, Brown managed only nine points through 31 games, but is now turning his season around in a big way and playing on the same line as Auston Matthews sure isn’t hurting his chances for more production.

Michael Frolik, RW, Calgary Flames (ESPN: 14.2 per cent; CBS: 30 per cent): Frolik has potted three goals while adding five assists over the last six games. At 0.56 points per game, he’s doing a bit better than usual, so there’s really not much upside here, but no reason you can’t avail of his current hot streak while you can. Frolik certainly offers decent value as a depth forward in standard formats.

Scott Darling, G, Chicago Blackhawks (ESPN: 25.1 per cent; CBS: 42 per cent): While he had looked middling in his last couple of outings, Darling stood on his head Friday, turning aside 39 of 40 shots that Carolina ripped at him. The 6’6″ goaltender has improved his GAA and save percentage this season, and while neither figure is as impressive as it was during his rookie effort in 2014-15, his numbers are still good enough to make him a fine backup option and a pretty steady DFS pick when you know he’ll be between the pipes.

By RotoRob
Tags: Patrick Maroon
This entry was posted on Sunday, January 8th, 2017 at 9:59 am and is filed under HOCKEY, RotoRob, The Wire Troll. You can follow any responses to this entry through the RSS 2.0 feed. Both comments and pings are currently closed.