The Wire Troll: In Search of Penalty Minutes 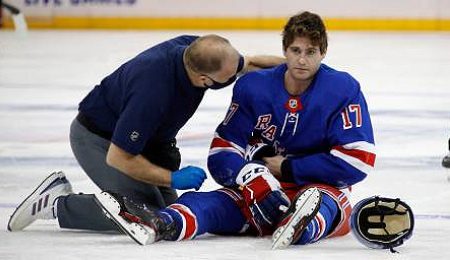 Welcome back to another week of Fantasy hockey. We’re now into mid-November and nearing the one-fifth mark of the season, so keep your foot on the pedal and employ the wire! In this week’s column, we dig deep to offer some category assistance and a couple of players taking advantage of opportunities.

This week, the Senators continued to be besieged by a Covid-19 outbreak (see below for the opportunity this has presented); Pittsburgh is starting to play better despite how short-handed the team is; and the Blackhawks have lost forward Brandon Hagel (shoulder) for two weeks.

Kevin Rooney, C, New York Rangers (ESPN: 0.2 per cent; CBS: unowned): For those of you that need help in penalty minutes in very deep formats, Rooney could fit the bill. He’s recorded minors in each of the last two games (see video below for an example), and last season had a career high 54 PM in 54 games. Rooney has also pitched in on the scoresheet, potting three goals to date, after managing just eight all of last season. He’s seeing more ice time than ever and can also help you in hits (20 this season) while playing on a good forechecking line. Rooney’s a good sized forward (6’2″, 190) capable of supplying a bit of everything.

Patrik Nemeth, D, New York Rangers (ESPN: 0.3 per cent; CBS: 1 per cent): If you need a blueliner that can pitch in with some PMs and blocks, take a look at Nemeth in deep formats. Don’t expect much in the way of points from the veteran, but with penalties in back-to-back games and as many as 53 minutes in a season before, he can help in that regard. The journeyman’s ice time is up and he’s already recorded 35 blocks with 20 hits, so could definitely be an asset in leagues that track these stats.

Zach Fucale, G, Washington Capitals (ESPN: 0.1 per cent; CBS: 4 per cent): Montreal’s second round pick back in 2013, Fucale finally made his NHL debut on Thursday and did something no other goalie has ever managed in a Washington uniform: record a shutout in his first NHL game. He turned aside 21 shots against a Detroit team that’s off to a decent start. Okay, so Furcale was only in the NHL on an emergency basis and has now been returned to the AHL, but he’s been superb in the minors (1.73 GAA after putting up a 1.80 mark last season), so at the very least tuck this name away. At the age of 26, he wouldn’t be the first goalie to be a late bloomer and wind up having a great career.

Zach Sanford, LW, Ottawa Senators (ESPN: 0.1 per cent; CBS: 1 per cent): Let’s pimp another Zach, shall we? With nearly half the Senators out with Covid-19, Sanford has found himself playing on the top line in Ottawa. He potted his first tally of the season on Tuesday, and is coming off back-to-back double-digit goal seasons for the Blues, so you know he’s capable of lighting the lamp occasionally. But right now, Sanford has an opportunity to really capitalize, so is worth a short-term add while the Sens deal with their outbreak. Don’t expect Fantasy gold, but in a deep league, he could be a useful piece over the next week or so.

Part British, part American rock band Foreigner got its start in 1976, and is still at it today. The first single from its 1977 debut, eponymous effort was “Feels Like the First Time,” which peaked at No. 4 on the Billboard Hot 100.

By RotoRob
This entry was posted on Saturday, November 13th, 2021 at 12:54 pm and is filed under HOCKEY, RotoRob, The Wire Troll. You can follow any responses to this entry through the RSS 2.0 feed. Both comments and pings are currently closed.