The Wire Troll: Immanuel Quickley Killing It for Knicks 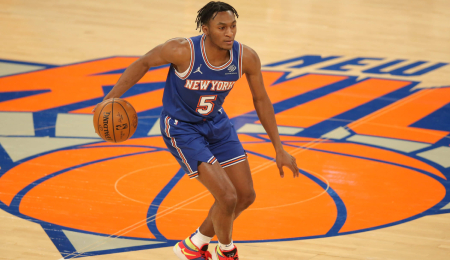 Welcome back to another week of Fantasy basketball. It feels like alumni week, as we’re pimping a couple of veterans who haven’t been on the Fantasy radar in quite some time. Milk that waiver wire!

This week, Ben Simmons was booed lustily in his return to Philadelphia; Cam Reddish (shoulder) is done for the season (see below for an opportunity this presents); and the Pelicans lost both Brandon Ingram (hamstring) and CJ McCollum (Health and Safety Protocol).

Immanuel Quickley, PG, New York Knicks (ESPN: 9.4 per cent; CBS: 40 per cent): Given that he had scored at least 11 points in five straight games before managing just nine (but with six boards and six dimes) on Wednesday (and then getting back to his double-digit scoring ways on Friday), Quickley was already a popular pickup. But he should be guaranteed an even bigger role going forward now that Reddish is done for the season. We recommended Quickley early on in his rookie season, and it was a solid pick until he seemed to hit a wall in April. His sophomore season has been a bit of a disappointment as he hasn’t been getting to the line as often, but given what he’s done lately, he looks like he’s going to finish with a flourish. Quickley’s recent work as the sixth man helped snap a tough seven-game losing skid for the Knicks as he begins to show why he was taken 25th overall in the 2020 draft (even if many though he was a reach at that slot). He has the jumper and aggressiveness (see video below) to provide offense, but there were questions about whether he was athletic enough to be a good defender in the NBA.

Tony Snell, SG, New Orleans Pelicans (ESPN: 0.1 per cent; CBS: unowned): Way back in his second season, Snell looked like an emerging force, and while he enjoyed a fine campaign with the Bucks in 2016-17, he’s mostly been a role player in his career. With Ingram sidelined at least a week, Snell was getting a chance to start, and while his efforts on Wednesday and Friday (no points or assists) were quite forgettable, he did play 31 minutes on Wednesday, and that got our attention in deeper formats. Snell isn’t jacking up as many three-pointers this month, so that’s something we’d like to see more of, but when he was starting in Portland, he did manage to contribute more offensively. At this point, consider Snell a short-term flier in very deep leagues.

James Johnson, SF/PF, Brooklyn Nets (ESPN: 0.3 per cent; CBS: 1 per cent): Back in 2016-17, Johnson was one of the better finds off the wire, but his career has dwindled since. Still, every now and then, he pops up and reminds you he’s still a force, like on Thursday when he threw a block party (five) with 16 points and three treys in 22 minutes. As long as LaMarcus Aldridge is hurting, Johnson is worth a look in deep leagues as his shooting has been off the charts lately (61.5 per cent so far in March). If Johnson can consistently get 20 MPG (a big if), his appeal will rise significantly.

Indy movie Smoke was released in 1995 featuring a great cast, but possibly an even better soundtrack. From this album comes Tom Waits‘ brilliant “Downtown Train,” originally released on his 1985 effort Rain Dogs.

By RotoRob
This entry was posted on Saturday, March 12th, 2022 at 12:43 pm and is filed under BASKETBALL, RotoRob, The Wire Troll. You can follow any responses to this entry through the RSS 2.0 feed. Both comments and pings are currently closed.