The Wire Troll: The Emergence of Tony Snell 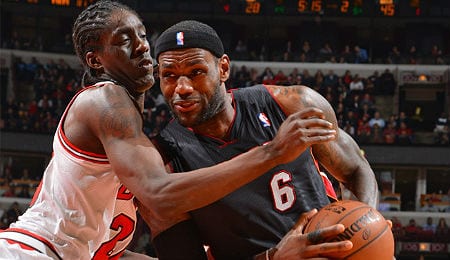 Tony Snell (left) has even been tasked with guarding the King. (imgarcade.com)

The All Star break is finally here, on Friday we saw Rudy Gobert and Andrew Wiggins lead the World Team over Team USA in the BBVA Rising Stars Challenge. On Saturday we get to see the six players with the most three pointers along with the last two champions in what should be a super exciting three-point shootout, then on Sunday we get the main event at Madison Square Garden. However, with it being the All Star break, now is time to load up and make a deep run into your league playoffs. A nice pickup might be Paul George, who announced he will try to return to practice on March 1, with the goal of playing on March 15.

J.J. Barea, PG/SG, Dallas Mavericks (ESPN: 6.8 per cent; CBS: 27 per cent): Barea, who has been starting while Rajon Rondo has been injured, has really stepped up his game. Barea has been able to score in double figures in six of his last seven games including a big 22-point performance on Wednesday in which he led Dallas to victory over the Jazz. He’s likely not worth a pick up on a long-term basis, however he’s a great handcuff to Rondo. — MP

Tony Snell, SG/SF, Chicago Bulls (ESPN: 9.1 per cent; CBS: 13 per cent): Snell has really been able to pick up his game in the past week. He’s seen his minutes really rise over the last nine games played (29 MPG), and with the extra PT, his stats have increased as well, netting 73 points over the last four games. He isn’t giving much else but is probably worth a pick up in deeper leagues. No longer the dreadlock wearing rookie he was last season, Snell is now growing into a real force (see video below). — MP

Mitch McGary, PF, Oklahoma City Thunder (ESPN: 11.1 per cent; CBS: 32 per cent): Coming into this week, McGary had played in two career games for a combined 8:09. Now, with Steven Adams out for another 2-to-4 weeks, McGary has been able to step up and play well, putting up back-to-back double-doubles. The only concern is that McGary could have some fouling issues, as in his third he fouled out with 0 points and 2 rebound. Hopefully this is a freak game or this could be a problem moving forward. Overall McGary’s ability to be a 10-rebound guy is too hard to pass up and makes him close to a must add. — MP

Tayshaun Prince, SF, Boston Celtics (ESPN: 0.4 per cent; CBS: 1 per cent): Prince ranked 35th among small forwards heading into the 2013-14 season, but has fallen off the Fantasy radar since. The former Kentucky great is now in Beantown and, having just returned from a hip woe, is starting to make noise. Last Saturday, he had eight points, five boards, three assists and a steal in 18 minutes, and on Wednesday added seven points, six boards, two assists, a trey and a steal in 27 minutes. If Prince keeps getting minutes like that off the Celtic bench, he’ll be worth a long look. — RR

Andrea Bargnani, New York Knicks (ESPN: 1.3 per cent; CBS: 19 per cent): Heading into the season, we didn’t expect Bargnani to hold onto the starting job in New York, and sure enough injuries prohibited him from even playing — never mind starting. But the Italian star is back now and it’s not going to take much for him to carve out some decent PT for an awful Knicks’ squad. On Monday, he played his first game in five weeks and looked rusty, getting into foul trouble. But Wednesday, he managed 11 points, five boards and a block in just 17 minutes. As his PT rises, be ready to pounce on Il Mago, as he could provide nice dividends in the second half. — RR

Dewayne Dedmon, Orlando Magic (ESPN: 0.1 per cent; CBS: unowned): We recommended Dedmon last January when he was with the Sixers, but he really failed to gain much traction despite some solid games. Well, he’s teasing us with his talent again. A couple of weeks ago, Channing Frye got benched in the second half, allowing Dedmon to get a crack with the first unit and he responded with a double-double and a block. Dedmon then went back to riding the pine, until this week, when his minutes started creeping up again and he took advantage with nine blocks in the last two games — including six swats on Wednesday. Keep an eye on this dude in the second half. Given enough PT, he can throw a serious block party. — RR

By McCade Pearson
Tags: Andrew Wiggins, NBA All-Star Game, Rudy Gobert
This entry was posted on Saturday, February 14th, 2015 at 3:21 pm and is filed under BASKETBALL, McCade Pearson, RotoRob, The Wire Troll. You can follow any responses to this entry through the RSS 2.0 feed. Both comments and pings are currently closed.