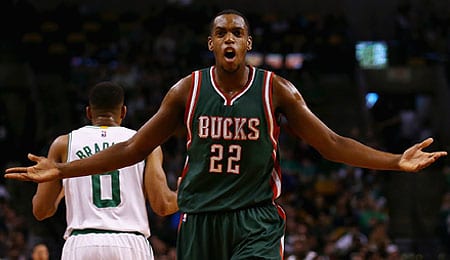 Khris Middleton was beside himself when he learned he was available on the waiver wire. (Sporting News)

The 2016-17 Fantasy basketball season is now in the books and here’s hoping you had a great campaign and that our waiver wire picks played a role in that.

Oh sure, we had plenty of misses among our picks, and because of the weekly nature of our column it means that some hot free agents get scooped up days before we can tout them, but the fact is that if you managed to wound up with, say, two or three of these guys on your team, chances are you were a pretty happy camper this season.

Khris Middleton, SG/SF, Milwaukee Bucks (Week Nine): Middleton represented a fantastic mid-season stash opportunity given his injury status (torn hamstring) and the prospect of him being healthy down the stretch. Those that snagged him and waited it out were rewarded with a third of a season of his services as he debuted in early February, and while his touches were down, he shot better when he did get his chances. This much is sure: barring another serious injury, you’re never going to be able to get Middleton off the wire again. Given that he’s arguably the best pure shooter (see video below) on the Bucks, Milwaukee really missed him at the beginning of the season.

Tyler Ulis, PG, Phoenix Suns (Week 19): Ulis didn’t let his size or hip issues stop him once the Suns turned over their offense to him towards the end of the season, proving to be one of the best late-season pickups in Fantasy basketball. The rookie took over as the starter for the final fifth of the season, sinking plenty of buckets and exhibiting fine FT shooting skills. Ulis needed ankle surgery after the regular season, but it was minor, and he’ll be ready to go for training camp.

James Johnson, PF, Miami Heat (Week Four): Miami would really like to retain soon-to-be free agent Johnson after he enjoyed a breakout season spent almost exclusively coming off the Heat bench. His outside shooting touch was never better, he scored more points from the line and he averaged a steal for the first time in five seasons. All told, it was a very improbable season from the veteran.

Marquese Chriss, PF, Phoenix Suns (Week Eight): Chriss was thrown right into the fire in rebuilding Phoenix, given a chance to start almost right from the get-go of his rookie season. The youngster did enough to be a useful Fantasy asset, but only scratched the surface of his ultimate potential.

Richaun Holmes, C/PF, Philadelphia 76ers (Week 18): Holmes got plenty of action thanks to Joel Embiid’s need for incessant rest and recuperation. Holmes took advantage, sinking more buckets, upping his production from beyond the arc, and becoming a solid source of rebounds. He’s the perfect insurance policy for Embiid that Philly has, but obviously Holmes’ value will plummet as Embiid is able to play more often.

Willy Hernangomez, New York Knicks (Week 13): Hernangomez came to the Knicks well acquainted with the man he was going to back up — Kristaps Porzingis. In his rookie campaign, Hernangomez really comported himself well, getting plenty of touches, and proving to be a voracious rebounder (averaging seven despite playing just 18.4 minutes per game).

Now it’s your turn. Let us know in the comments below who your favourite Fantasy basketball waiver wire pick of the seasons were.

By RotoRob
Tags: Khris Middleton, NBA
This entry was posted on Tuesday, June 6th, 2017 at 12:15 pm and is filed under BASKETBALL, RotoRob, The Wire Troll. You can follow any responses to this entry through the RSS 2.0 feed. Both comments and pings are currently closed.