The Wire Troll: Brian Dumoulin to See Plenty of PT for Pittsburgh 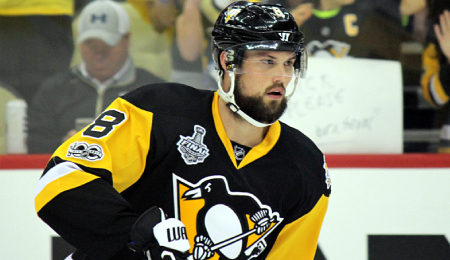 Brian Dumoulin will be leaned on heavily. (Michael Miller)

Welcome back to another week of Fantasy hockey. We’re two-thirds done the season with the Trade Deadline just a couple of weeks away, so it’s time to pay close attention and start identifying players that may see a boost in value down the stretch.

This week, Duncan Keith got a hero’s salute in his return to Chicago; Ivan Miroshnichenko, a projected first round pick this year, will miss as much as a year while dealing with serious health problems; and the Sharks made a deal for a goalie after James Reimer got hurt (see below).

Brian Dumoulin, D, Pittsburgh Penguins (ESPN: 2.7 per cent; CBS: 6 per cent): Dumoulin has dealt with his share of injuries in recent years, including in 2019-20 when he failed to play even 30 games. But through it all, he’s consistently seen more ice time. And now, with Mike Matheson (UBI) out indefinitely, the Pens are really going to lean on Dumoulin (22:49 ATOI over the last two games). Dumoulin has not been producing offensively of late, but he’s a big (6’4″, 207) defender who can move the puck, rack up the blocked shots (even goal-saving ones, like the block he discusses in the video below) and is unafraid to mix it up. Small wonder he’s a fan fave in Steel City.

Connor McMichael, C/LW, Washington Capitals (ESPN: 0.4 per cent; CBS: 17 per cent): McMichael’s lack of productivity (over three weeks since his last point) is a concern, but he should get a boost with Carl Hagelin (eye) out long term. McMichael arrived in the NHL with a lot of hype, but with just 15 points so far, he hasn’t enjoyed the kind of rookie season some anticipated. But there was a reason he was taken 25th overall in 2019, so be patient. Don’t forget that last season McMichael managed over 0.8 points per game in the AHL as a rookie; there’s plenty of upside here.

Zach Sawchenko, G, San Jose Sharks (ESPN: 0.1 per cent; CBS: unowned): As alluded to above, the Sharks’ goaltending situation is in dire straights right now after starter Reimer got hurt on top of regular backup Adin Hill already being out. This leaves youngster Sawchenko and newly aquired Alex Stalock to man the crease for now. When Reimer had to leave early on Tuesday, it was Sawchenko who took his place and may be in line to start Saturday. Sawchenko wasn’t razor sharp on Tuesday, but in three relief appearances, he’s made 40 saves on 43 shots for a sweet .930 save percentage. The Calgary native is a perfect 6-for-6 in saving high danger scoring chances so far. If you need goaltending help, Sawchenko is an intriguing short-term addition.

Brian Elliott, G, Tampa Bay Lightning (ESPN: 2.1 per cent; CBS: 11 per cent): Speaking of backup goalies (yes, we’re digging deep this week), on the other end of the age spectrum is Lightning No. 2 goalie Elliott. Injury-prone as a starter, he has found his niche as a backup and earned the win in a rare start on Friday. Elliott has alternated good and bad outings in recent weeks, but it’s hard to quibble with his record, GAA (lowest since he left the Blues) and save percentage (best since his first two seasons in Philly). One of the last goalies to still use a wood stick, he makes for a decent backup in a very deep league.

Ryan McLeod, C, Edmonton Oilers (ESPN: 0.1 per cent; CBS: 1 per cent): McLeod has been getting a shot in the top six with several key Oiler forwards hurting, and now that Ryan Nugent-Hopkins (UBI) is out week-to-week, McLeod’s opportunity has increased. No, McLeod hasn’t been overly productive, but his ice time keeps rising, so it’s just a matter of time before the goals start coming more frequently. Consider him a nice speculative pickup for the second half.

Here’s another track from the classic The Last Waltz farewell concert by The Band. This is Van Morrison sharing lyrics with Richard Manuel on “Tura Lura Lural (That’s an Irish Lullaby).”

By RotoRob
This entry was posted on Saturday, March 5th, 2022 at 12:01 pm and is filed under HOCKEY, RotoRob, The Wire Troll. You can follow any responses to this entry through the RSS 2.0 feed. Both comments and pings are currently closed.