The Wire Troll: De’Anthony Melton Moving up in Memphis 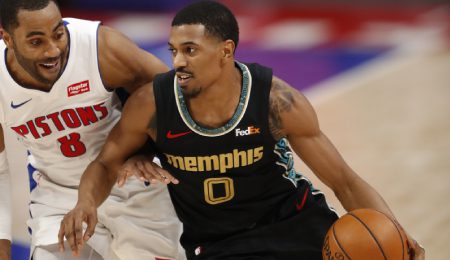 Welcome back to another week of Fantasy basketball. December is upon us and we’ve passed the season’s one quarter mark. Drink from the waiver wire pool, peeps!

This week, Phoenix continues to roll (even with Devin Booker now out), earning a franchise-record 18th straight win; Damian Lillard was out Thursday as Portland got humiliated by the Spurs; and John Konchar tied his season highs in steals and points as the Grizzlies bagged the most lopsided win in NBA history.

De’Anthony Melton, PG/SG, Memphis Grizzlies (ESPN: 12.1 per cent; CBS: 49 per cent): With Ja Morant (knee) expected out for several weeks, there are several options on Memphis who could benefit, but we’re big on Melton, who came through with a huge game on Thursday. Coming off the bench, Melton poured in 19 points on 8-of-10 shooting with six boards, five assists and three treys. After slowing last month, he hasn’t been seeing the minutes we’d like over the last couple of weeks, but perhaps this effort earns him more PT. Melton’s bucket count has risen in each of his four seasons, and in 2019-20 he finished ahead of Morant to lead the club in on/off differential. Melton has potential breakout written all over him, and he sure can throw it down (see video below).

Landry Shamet, SG, Phoenix Suns (ESPN: 0.5 per cent; CBS: 2 per cent): In mid-February 2020 we recommended Shamet, and it was a solid pick as he saw an uptick in PT that month before fading down the stretch. We’re back to give him another look now that Booker’s out, and so far, so good. On Thursday, Shamet got his first start of the season and responded with 14 points, four threes and three boards, and then he added another three treys on Friday. His bucket count was up last month, but overall he’s seen his role reduced this season. This is Shamet’s chance to change that, and early on, he’s looked good, so makes for a nice short-term addition, especially if you need help with three-pointers.

Jeff Green, PF, Denver Nuggets (ESPN: 2.8 per cent; CBS: 21 per cent): You’ve got to go back nearly three years since we last pimped Green, and that pick turned out decently. Fast forward to this season, and he’s been getting more burn lately — something that will continue now that injury-prone Michael Porter Jr. (back) needs season-ending surgery. Green’s streak of four straight double-digit scoring games ended on Wednesday, but he still pitched in with three assists and two treys. The veteran’s touches were up significantly last month, and it looks like he’ll not only be a solid DFS play for the time being based on his strong recent work, but he could be a fine asset for the remainder of the season given how much PT he’s likely to receive.

Pat Connaughton, SG/SF, Milwaukee Bucks (ESPN: 20.6 per cent; CBS: 50 per cent): A fourth round pick by the Baltimore Orioles in 2014 (yes, you read that right), Connaughton has been an important bench player for the Bucks for several years now, one capable of starting on occasion. Like on Thursday, for instance, when got the start with Giannis Antetokounmpo a last-minute scratch with right calf soreness. Ironically, despite seeing more action, Connaughton’s streak of six straight double-digit scoring games was snapped, but whether starting or coming off the bench, he’s a valuable player. He got more touches last month and is enjoying his finest shooting effort since arriving in Milwaukee. Connaughton can help you in threes, boards, steals and points.

By RotoRob
This entry was posted on Saturday, December 4th, 2021 at 11:33 am and is filed under BASKETBALL, RotoRob, The Wire Troll. You can follow any responses to this entry through the RSS 2.0 feed. Both comments and pings are currently closed.