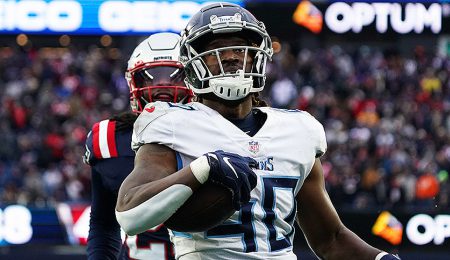 For our Week 14 Fantasy football waiver wire top recommendation, we feature a running back who has burst onto the scene and given us back-to-back successful weeks, Dontrell Hilliard of the Tennessee Titans. He’s currently coming off a bye week, so his legs should be fresh and ready to pick up where he left off in Week 12, when he ran for 131 yards and a touchdown.

After Hilliard’s massive showing against the stingy Patriot defense, now he gets to go up against the Jacksonville Jaguars’ 21st-ranked defense, which is allowing 378 total yards per game, including 116 on the ground. The Jaguars have shown they are susceptible to teams pounding the rock against them.

Since Derrick Henry (No. 2 on our Running Back Rankings heading into the season) has been out, the Titans have continued to be a run-first offense. They have split the backfield with Hilliard and D’Onta Foreman, but Hilliard has shown big play ability like his 68-yard touchdown rush last game (see video below). Hilliard also caught eight passes in Week 11 against the Texans, proving he is a dual threat back. Not bad for a dude that started the season on the practice squad.

In fact, since he’s been placed in the lineup, he’s averaging 18 Fantasy points.

The Jaguars are coming off a 37-7 loss to the Rams in which they were dominated in every aspect of the game. They head into Tennessee and face a desperate team which badly wants to snap its two-game losing streak and remain atop the AFC South standings, currently clinging to a one-game lead over the Colts.

Back in Week Five, the Titans went into Jacksonville with Henry in their lineup and put on a rushing clinic. They totaled 184 yards on the ground with three touchdowns, averaging 5.1 yards per carry. This week they are playing at home in Tennessee, so expect Jags rookie quarterback Trevor Lawrence to have another tough outing.

Rostered in 36 per cent of ESPN leagues, Hilliard is the perfect waiver wire pickup for Week 14. Along with his volume of rushes and passes, he’s also a kick returner, so you may get bonus points for any returns over 25 yards or — if you’re really lucky — a potential touchdown return. Until Henry is back in the lineup, Hilliard is great add (and we’ve got plenty of company in thinking so) as a flex player heading into the playoff push.

American rockers Red Hot Chili Peppers formed in 1983 and are still at it today. In 1992, they released a best of compilation called What Hits!?, which includes “Hollywood.” This tune was originally called “Hollywood (Africa),” when released as the second single off the 1985 album Freaky Styley.

By Trevor Penn
This entry was posted on Wednesday, December 8th, 2021 at 5:59 pm and is filed under FOOTBALL, The Wire Troll, Trevor Penn. You can follow any responses to this entry through the RSS 2.0 feed. Both comments and pings are currently closed.