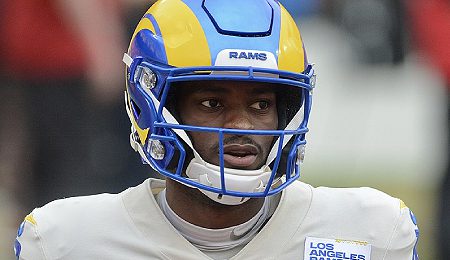 Van Jefferson is poised for a big finish to 2021. (All-Pro Reels Photography)

Week 12 is in the books, and the injuries are piling up at running back, so let’s hope you weren’t one of the unlucky Fantasy owners that lost one. Christian McCaffrey got knocked out for the season, Dalvin Cook was carted off the field with a shoulder injury, and Darrell Henderson Jr. was spotted at practice wearing a wrap on his thigh.

If you have waiver wire priority, Alexander Mattison is the clear choice given that Cook will be out for at least the next three games, but for everybody else, we’d advise against the quick plugin to fix your running back situation and instead suggest you scoop up this top wide receiver who’s not only going to help you this upcoming weekend but also through your playoff run.

This week, we feature Los Angeles Rams wide receiver Van Jefferson, who is rostered in just 42.9 per cent of ESPN leagues, yet is the 32nd-ranked wide receiver, averaging 9.5 Fantasy points. Since the release of DeSean Jackson and the season-ending injury to Robert Woods, Jefferson’s Fantasy stock has skyrocketed.

You may recall that we recommended Jefferson back in Week Five. That pick didn’t work out as he was only targeted four times, hauling in one reception for 16 yards. Undeterred, we’re giving him more love, and this time, we’re not alone.

Jefferson (6’2″, 195) is the perfect combination of speed and agility with the height to outjump most cornerbacks. He is a constant threat for the deep ball; just last week, he pulled in a 79-yard dime from Matthew Stafford (after which Jefferson even had the audacity to do a Lambeau Leap… as a visiting player — see video below).

Coming off a bye in Week 11, Jefferson turned nine targets into 93 yards receiving with a touchdown. Stafford passed the ball 38 times and tossed three touchdowns in a high scoring showdown against the Packers. In Week 13, the Rams face a struggling Jaguar defense that’s allowing 25.7 points and 258 yards passing per game.

Expect the Rams, coming off a disappointing loss to the Packers, to have a statement performance and lay a beat down on the Jaguars. Aaron Donald and Von Miller will be aggressive in trying to pressure rookie QB Trevor Lawrence, and Jalen Ramsey will be assigned to shut down Marvin Jones Jr.

We’re expecting a couple of Jacksonville turnovers, and plenty of short fields for the Rams to pile on the points. Add Jefferson to your team this week for a great insurance plan who you can use as your flex player or as part of your regular lineup in favourable matchups.

American singer James Taylor has been at it since 1966. In 1970, he released his second album, Sweet Baby James, and from this effort came his breakthrough hit, “Fire and Rain,” which reached No. 3 on the charts.

By Trevor Penn
This entry was posted on Thursday, December 2nd, 2021 at 3:02 pm and is filed under FOOTBALL, The Wire Troll, Trevor Penn. You can follow any responses to this entry through the RSS 2.0 feed. Both comments and pings are currently closed.