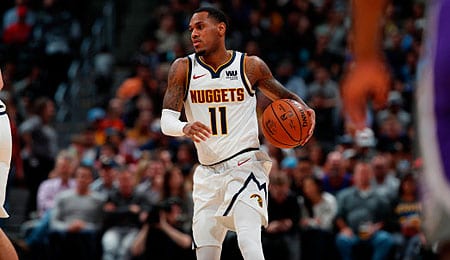 Welcome back to another week of Fantasy basketball. We’re now into February, and the trade deadline has just passed, so now’s the time to pounce on anyone whose value has risen because of a trade.

This week, Danny Ainge expressed confidence that Kyrie Irving was going to re-sign long-term with Boston this summer; now that the trade deadline has passed, the Pelicans plan to play Anthony Davis for the rest of the season; and LeBron James took Kevin Durant with the first pick in the All-Star Game draft.

Monte Morris, PG, Denver Nuggets (ESPN: 25.4 per cent; CBS: 48 per cent): Morris had been heating up in recent weeks, but has really made hay since starter Jamal Murray went down with an ankle injury. Second-year guard Morris enjoyed another big game Wednesday when he canned 8-of-14 from the field en route to 18 points in 28 minutes, adding five boards, five assists and a steal. The game before, he also torched Detroit for 18 points (see video below). After seeing a slight decrease in PT in January, Morris is playing big minutes lately with Murray out. Morris barely played last season, and came exclusively off the bench, but has now shown potential as a starter. Note that Isaiah Thomas may soon be ready to play, and that will affect Morris’ PT, but it’s hard to ignore what a boost in assists and FG percentage he’s provided over the last week. Coming out of Iowa State in 2017, Morris was a decently-sized point guard who showed leadership qualities, but wasn’t the most athletic player, considered a Moochie Norris type.

Wayne Ellington, SG, Free Agent (ESPN: 0.5 per cent; CBS: 2 per cent): After getting dealt from Miami to Phoenix and then waived, Ellington became one of the top players available on the buyout market and is reportedly very close to signing with Detroit. Less than two weeks ago, he exploded for 19 points — all in the second half — in a win over the Knicks, proving he can still ball when given minutes. Despite limited PT, Ellington sunk more buckets last month, but overall, he’s played just 25 games after falling out of the rotation with a crowded backcourt in Miami and racking up the DNP-CDs. He’ll have a chance to redeem himself with the Pistons.

Tyler Johnson, SG, Phoenix Suns (ESPN: 8 per cent; CBS: 35 per cent): As with Ellington, escaping the backcourt situation in Miami will be a boon to Johnson after he was traded to Suns. Johnson is expected to take over as the starting point guard in Phoenix, making him one of the bigger winners of the deadline. He’s been quiet lately, but his touches were up last month. After starting most of his games last season, Johnson has only started 10 times this season, so moving back into a starting role is a huge boost to his value.

Ivica Zubac, C, Los Angeles Clippers (ESPN: 12 per cent; CBS: 43 per cent): Traded from one Staples Center tenant to another at the deadline, Zubac will get a chance to start for the Clippers when he makes his debut on Saturday in Boston. At the top of the depth chart, he’ll give the Clippers a more traditional centre than they’ve used in recent seasons, and this should be a nice boost to his value considering he was seeing sporadic minutes with the Lakers.

Bruno Caboclo, SF, Memphis Grizzlies (ESPN: 0.3 per cent; CBS: 2 per cent): With Kyle Anderson still out, Caboclo is getting a chance to act as the sixth man for the Grizzlies, and he’s really showing something, going for 16 points, five boards, three treys and an assist on Friday. Caboclo got one start earlier this season, and the fan fave could soon get more for the rebuilding Grizz.

Ivan Rabb, PF/C, Memphis Grizzlies (ESPN: 4.5 per cent; CBS: 25 per cent): With plenty of upheaval in Memphis, there is a couple of players whose value is rising. Rabb makes for a great DFS play right now as things normalize for the Grizzlies. He’s had back-to-back games of 15 or more points, recording one double-double and just missing a second. Rabb probably would have been a lottery pick had he entered the draft in 2016, but had a disappointing sophomore season in college and fell to the second round in the 2017 draft.

Jeff Green, SF/PF, Washington Wizards (ESPN: 22.8 per cent; CBS: 49 per cent): Green’s three-point shooting has improved since the calendar switched to 2019, and most recently, he’s pouring in 19.9 points per game over the last seven. This vet’s on fire.

Dorian Finney-Smith, SF/PF, Dallas Mavericks (ESPN: 2.3 per cent; CBS: 11 per cent): Finney-Smith has been a bit of a DFS (which, coincidentally, matches his initials) darling this month, but now that Harrison Barnes has been traded, he is likely in line for more PT for the rest of the season, so pick him up.

Kenrich Williams, SF, New Orleans Pelicans (ESPN: 4.7 per cent; CBS: 26 per cent): This rookie has been flying under the Fantasy radar until recently, but now deserves some serious consideration while the Pelicans are a bit beat up. If you need help in three-pointers, grab Williams.

American country performer Skeets McDonald churned out the tunes between 1935 and his death in 1968. In 1964, he released the single “Down in Mexico,” produced by the legendary Don Law, who worked with the likes of Robert Johnson, Johnny Cash and Anita Bryant.

By RotoRob
Tags: Monte Morris
This entry was posted on Saturday, February 9th, 2019 at 4:27 pm and is filed under BASKETBALL, RotoRob, The Wire Troll. You can follow any responses to this entry through the RSS 2.0 feed. Both comments and pings are currently closed.