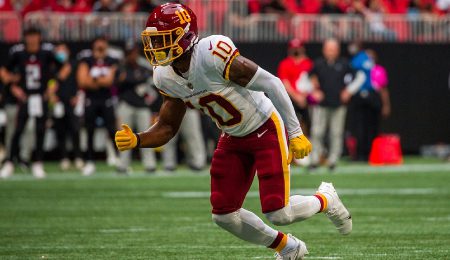 [Editor’s Note: Please join us in welcoming our newest NFL writer, Trevor Penn, who checks in with his first article for us today.]

Our feature waiver wire pickup of the week, WTF wide receiver Curtis Samuel, is set to return from a groin injury that has sidelined him since Week Five, and he’s going to be making his comeback under the glare of the MNF spotlight. He’s currently rostered in just 24.2 per cent of ESPN leagues.

Playing at home against Seattle, Washington should benefit from its home crowd, and will likely create turnovers and short yardage situations for its offense. We were actually really high on Samuel heading into Week Five, but that pick backfired when he got hurt. Undeterred, we are back to give him more love, especially given reports that he’s looked great in practice.

Last year, Samuel was a key piece of Carolina’s offense, chipping in with short receptions and acting as a constant threat in the run game. He was one of Washington’s big free agent pickups in the offseason, so the coaching staff want him to be a key piece of the attack.

Samuel should find some free space on his side of the field considering he’ll be lining up across from scary Terry McLauren, whom will likely draw Seattle’s shutdown corner.

Offering a mix of speed (see video below), great hands, height and power, Samuel is a quarterback’s favourite weapon. He is used in short-passing situations, on deep balls, and for rushing plays near in the red zone. With Samuel’s speed, you can expect a Wildcat play tossed in to keep Seattle’s defense honest.

With Logan Thomas still on the IR, expect the target share to be even higher for Samuel. Plus, QB Taylor Heinecke has shown that he’s a capable starter in the absence of Ryan Fitzpatrick. For instance, in his last outing, Heinecke completed 80 per cent of his passes to wideouts, totaling 179 yards with three touchdowns. Toss in the fact that the Seahawks have shown some coverage issues in the secondary and it should create more opportunities for Samuel.

We expect Antonio Gibson to move the chains consistently, thereby creating short second and third downs for WTF’s receivers to get deep ball opportunities. The offense should be able to move the ball downfield with a mix of passing and rushing, creating opportunities in the red zone. With Samuel a dual pass and run threat, he should find a way into the end zone.

The Seahawks have been struggling this year with a 3-7 mark, saddled by a defense that ranks 24th and is allowing 20.9 points, 291 passing yards and 122.2 rushing yards per game. The offense hasn’t fared much better, scoring just 13 total points over the past two games, including getting shut out by Green Bay in Week 10.

Seattle will be without star running back Chris Carson (out for the season), so will have to rely on a running back by committee headed by struggling Alex Collins. Adding to the Seahawks’ offensive issues, since returning from a finger injury in Week 11, Russell Wilson seems to still be struggling with this woe as he’s having trouble accurately connecting with receivers. This all adds up to suggest that Washington will have the ball in its hands a lot on Monday night.

Samuel will get 11 targets, pulling in eight of them for 70 yards and a touchdown. He’ll also add three carries for 20 yards, finishing as a top 15 wide receiver, and as the top waiver wire pickup of the week. Not only should you play Samuel this week, but going forward, he has the 26th-easiest wide receiver schedule in the playoffs (Weeks 14-17).

Samuel is a solid pickup and would be a top four wide receiver on anyone’s bench, if he’s not in your lineup. Use him as a WR2 or flex option.

In 1970, the band Babe Ruth formed out of guitarist Alan Shacklock‘s band Shacklock. Their fourth album, Stealin’ Home, was released in 1975 and reached No. 169 on the U.S. charts. The lead song from this effort was “It’ll Happen in Time.”

By Trevor Penn
This entry was posted on Thursday, November 25th, 2021 at 3:14 pm and is filed under FOOTBALL, The Wire Troll, Trevor Penn. You can follow any responses to this entry through the RSS 2.0 feed. You can skip to the end and leave a response. Pinging is currently not allowed.