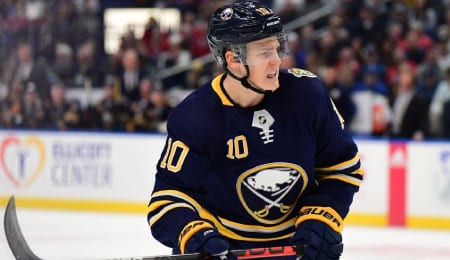 Welcome back to another week of Fantasy hockey. The trade deadline earlier this week has created opportunities for plenty of players, so be sure to take advantage of the waiver wire for the stretch run.

This week, Tampa Bay lost star forward Steven Stamkos to LTIR with an LBI; Toronto sniper Auston Matthews‘ wrist is acting up again; and Vancouver’s return to play after the Covid outbreak was postponed for another couple of days.

Henri Jokiharju, D, Buffalo Sabres (ESPN: 0.4 per cent; CBS: 4 per cent): Jokiharju’s assist count has been a disappointment this season, but he’s poised for a nice finish now that Brandon Montour has been traded from Buffalo to Florida. Jokiharju now finds himself on the top pairing (and gaining chemistry, as you can see in the video below) and given extra ice time, he’s really improved play of late, picking up a goal and three helpers while going +3 over the last five games. He has the offensive tools to be a real asset on the power play, so take a look at him if you need blueline help down the stretch.

Scott Harrington, D, Columbus Blue Jackets (ESPN: 0.1 per cent; CBS: unowned): Another defenseman that is benefiting from the trade deadline is Harrington. With David Savard traded to Tampa Bay, Harrington has been given a chance to play, so we’ll see what he can do. Harrington is likely only an option in very deep leagues, but he’s been logging much more ice time since moving back into the lineup, so at the very least, keep an eye on him.

Jaret Anderson-Dolan, C, Los Angeles Kings (ESPN: 1.9 per cent; CBS: 5 per cent): With Jeff Carter getting traded to Pittsburgh, Anderson-Dolan has taken over as the 2C, and he’s been doing a pretty good job of putting up some points, with the chance now to really step up. Anderson-Dolan has had a couple of rough contests this week, but last week he scored in back-to-back games and he’s starting to show his offensive talent this season. We think he could be a nice asset going forward.

Jake Oettinger, G, Dallas Stars (ESPN: 9.6 per cent; CBS: 30 per cent): Ben Bishop is done for the season in Big D, opening the door for rookie Oettinger, the team’s 2017 first round pick. Oettinger has been taking advantage of the opportunity with some solid play — especially lately, with a .944 save percentage in April so far. His fine performances are helping him make a claim as the goalie of the future in Dallas and a worthy picking up as a second goalie for the remainder of the season.

Casey Mittelstadt, C, Buffalo Sabres (ESPN: 2.8 per cent; CBS: 10 per cent): Since going eighth overall to Buffalo back in 2017, Mittelstadt has been a disappointment. He showed some promise in 2018-19, but even that season was interrupted by injury. However, now that Jack Eichel is officially done for the season, could it be Mittelstadt’s time to shine? After scoring a goal and going +2 on Thursday, Mittelstadt now has a team-leading six goals and eight points over the last nine games. After such major regression last season, could he finally be taking a step forward? Keep in mind that Mittelstadt is still just 22.

Jake DeBrusk, LW, Boston Bruins (ESPN: 3.9 per cent; CBS: 21 per cent): When we last checked in on DeBrusk he was picking up his play last season, but overall he again failed to build on his great rookie effort of 2017-18. This season things have gone further downhill despite the fact he’s killing it in shootouts (2-for-3). However, DeBrusk is showing signs of life lately, getting points in both games last weekend and ripping five shots on Thursday. If only he had a decent playmaker to feed him. Well, either way, we think DeBrusk is someone to watch down the stretch.

Chris Wagner, RW, Boston Bruins (ESPN: 0.2 per cent; CBS: unowned): Wagner is another Bruin forward that’s having a meh season, but could pick things up now that he’s been paired with newcomer Curtis Lazar. Wagner had five shots on goal on Thursday and has seen an uptick in PT lately; we’re just waiting to see if the production can follow. He’s worth considering in very deep formats.

Anthony Stolarz, G, Anaheim Ducks (ESPN: 1.4 per cent; CBS: 2 per cent): While John Gibson is the clear starter in Anaheim, he’s had some trouble staying healthy and backup Ryan Miller is as old as dirt. So perhaps there’s an opening for Stolarz, who is certainly making his case lately for more PT. The fifth year vet has shown flashed of brilliance before, but has had his share on injury issues as well. However, Stolarz really stepped up on Monday, setting a team record with 46 saves in a shutout and then followed that up by stopping 27 of 28 pucks he saw on Wednesday, just missing a second straight blanking. It’s clear he’s going to get some looks down the stretch, so add him in deeper formats if you need goaltending help.

Soul singer Tommy Collins got his start with doo wop group The Paragons, but ultimately went solo and is best known for the 1967 hit “Oh What I’d Give.”

By RotoRob
This entry was posted on Saturday, April 17th, 2021 at 4:09 pm and is filed under HOCKEY, RotoRob, The Wire Troll. You can follow any responses to this entry through the RSS 2.0 feed. Both comments and pings are currently closed.