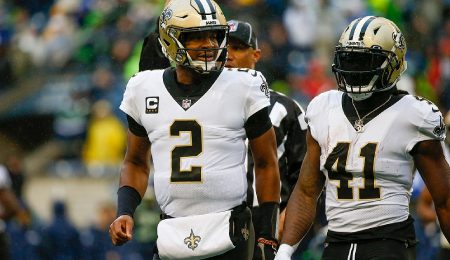 Jameis Winston (2) has been decent, but is poised for more in Week Eight. (Touchdown Wire – USA Today)

Bye week hell is over, but the Fantasy season-long nightmare is still gaining speed. Patrick Mahomes looked washed up against the Titans; Calvin Ridley was saved from Fantasy abyss by a touchdown; and Justin Fields couldn’t stop turning the ball over if his life depended on it. Here is our latest resource to help you navigate through this week’s murky waters.

Jameis Winston, New Orleans Saints: Winston is truly the Nicholas Cage of Fantasy quarterbacks. Against the Legion of Gloom, Jameis produced a pedestrian stat line of 19-222-1 with 10 receptions funneled to Alvin Kamara for 128 yards and a touchdown. However, this week the revenge narrative coupled with brutal injuries on Tampa Bay’s secondary primes the W-eating quarterback for a shootout with Tom Brady. This will be Winston’s National Treasure game (as long as he parks his comedy routine — see video below).

Dak Prescott, Dallas Cowboys: The perfect storm is swirling around the Dallas Cowboys as key management personnel including owner Jerry Jones keep reiterating they “felt good” about Prescott. The star quarterback — who is still dealing with a calf strain, so not guaranteed to even play — gets a difficult draw against a run-funneling Minnesota defense that ranks third in pass DVOA. On the season, the Vikings have managed to pressure opposing quarterbacks 32 per cent of the time, producing a sack rate of 9.3 per cent (both ranked first in the league). Owners should expect a pseudo pitch count for Prescott and a heavier tilt towards the run game.

Kenneth Gainwell, Philadelphia Eagles: Gainwell finished last week with 50 per cent snap count after Miles Sanders exited the game with an ankle injury. Although Boston Scott out-carried him seven to five, Gainwell had the most valuable opportunities in eight targets to Scott’s two. Rookie Gainwell, who was already siphoning Fantasy points from Sanders, should produce RB2 numbers as his predecessor is expected to be sidelined.

Jonathan Taylor, Indianapolis Colts: Coming off a morale-crushing win over Kansas City, the Titans have a lot of momentum heading into the game against their division rival. Although the Titan defense has had more holes than Swiss cheese this season, they understand Taylor is the centrepiece of HC Frank Reich‘s offense and held him to just 7.7 Fantasy points in their last outing. The Colts’ sophomore (who has been limited at practice this week with ailing ribs) should perform better, but without a viable PPR floor, this could easily be a bust-over-boom scenario. Don’t get us wrong; Taylor has actually outperformed our projections so far this season, but we definitely think you should temper expectations in Week Eight.

Laviska Shenault Jr., Jacksonville Jaguars: Over the last two games, Shenault Jr. flirted with near full time snap count (79 per cent) and route participation (83 per cent). D.J. Chark‘s injury opened a role for Shenalt Jr. on formations other than 11 personnel, which was limiting his ceiling. Despite an incredibly low ADoT, Shenalt Jr. has seen 41 targets on the season, second only to Marvin Jones (46). Shenalt Jr. has a golden draw against a putrid Seattle secondary that needs to prioritize stopping Jones. Seattle’s bottom 10 pressure rate on quarterbacks should provide a clean pocket for Trevor Lawrence to operate within.

Mike Evans, Tampa Bay Buccaneers: In the two game sample with Tom Brady in 2020 against the New Orleans Saints, Evans produced an abysmal line of 5-66-1 on 10 targets. Presumably, Marshon Lattimore had a lot to do with Evans’ lack of production and this is unlikely to change. Over Lattimore’s five NFL seasons (10 games versus Tampa Bay), Evans has managed just 14 receptions on 30 targets. With the Saints playing stout pass defense (sixth in DVOA), Evans is a solid sit choice.

Adam Trautman, New Orleans Saints: Trautman and Winston are a sneaky stack this week against a weakened Tampa Bay defense. Buc LB Lavonte David practiced this week on a limited basis after suffering an ankle injury that kept him out of Week Seven and is a player worth monitoring in the run up to the game. Collectively, Tampa has given up the ninth most Fantasy points to opposing tight ends. Further, Trautman’s snap count and route participation has risen to season-highs of 83 per cent and 63 per cent, respectively, presenting an opportunity to Fantasy owners without Mark Andrews.

C.J. Uzomah, Cincinnati Bengals: Theatrically, Uzomah put up a line of 3-91-2 against Baltimore, but that marked only the second time he produced more than 10 Fantasy points this season. While we don’t anticipate the Jets to put up much of a fight (seventh in Fantasy points allowed to opposing tight ends), we question Uzomah’s ability to replicate his performance. Excluding his games against the Ravens and Jaguars, he has a line of 9-70-1 in five games. Buyers beware!

Chicago hailed from — of all places — Chicago. In 1976, it released Chicago X, its eighth studio effort (but 10th overall), and the second single from this album was the sugary sweet “If You Leave Me Now,” the band’s first No. 1 hit in the U.S.

By Lucas Chan
This entry was posted on Thursday, October 28th, 2021 at 6:03 pm and is filed under FOOTBALL, Lucas Chan, Start 'em Sit 'em. You can follow any responses to this entry through the RSS 2.0 feed. Both comments and pings are currently closed.