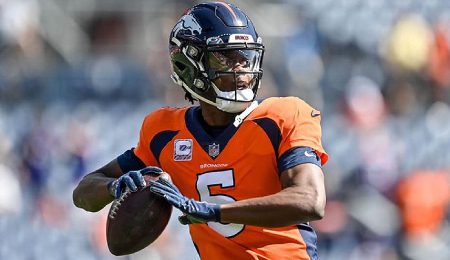 Teddy Bridgewater has a sweet matchup in Week Seven. (The Athletic)

Welcome to bye week hell. Dallas, Minnesota, Buffalo, Jacksonville, Pittsburgh and the Chargers will get to enjoy their week off, unlike many Fantasy owners who are left scrambling to piece together a winning lineup. Fortunately, we are here to help.

Teddy Bridgewater, Denver Broncos: Since his concussion scare, Bridgewater has averaged 20 Fantasy points by completing 59 attempts for 622 yards with five touchdowns and four interceptions against Baltimore and Pittsburgh. Not bad for a dude that wasn’t even the sure fire starter heading into the season. Yes, he’s dealing with a foot injury this week, but is still expected to start. And in drawing — on a short week — an injury-riddled Cleveland team that’s allowing 24.3 Fantasy points to quarterbacks (third in the league), the Broncos’ signal-caller is a top streamer to target for Josh Allen, Dak Prescott and Justin Herbert owners. Perhaps Bridgewater can even duplicate his efforts from the virtual world (see video below).

Tom Brady, Tampa Bay Buccaneers: Chicago’s defense has 21 sacks (tied for first in the league) despite the lack of blitzes (third lowest), subsequently allowing just 16.6 Fantasy points-per-game to opposing quarterbacks. Da Bears limited Aaron Rodgers to just 195 passing yards, and while he saved his day with a rushing touchdown, that’s not something we fathom seeing from Brady. Despite the old mantra “never bet against Tom Brady,” a lingering thumb injury and poor second half play against Philadelphia dampens our expectations of the HOF quarterback to a QB2 performance this week.

J.D. McKissic, Washington Football Team: Antonio Gibson left the game after aggravating his shin injury in the second quarter. While he did return to the game, his tibia stress fracture will not get better and requires season-long management, and ultimately, surgery as per ProFootballdoc. In Gibson’s absence, McKissic had eight carries for 45 yards and eight receptions for 65 yards, good for 19 PPR Fantasy points. In the event Gibson is ruled out, McKissic vaults to low-end RB1 status against a 29th-ranked DVOA Green Bay defense that’s allowed 34 receptions and three touchdowns to running backs. Invest that FAAB.

Devontae Booker, New York Giants: The Panthers have allowed just 12.3 Fantasy points to opposing running backs (second fewest) with 4.6 yards per carry and two touchdowns on the ground, and 71 yards on 16 receptions in the air. It’s a daunting matchup for a bottom-five offensive line like the Giants, and with Daniel Jones still seeing stars from this hit in Week Five, so it is unlikely Booker will experience positive game script. Booker’s had nearly identical opportunity and usage numbers in place of the injured Saquon Barkley, but Fantasy owners should expect even worse efficiency this week than what Booker showed in Week Six.

Robby Anderson, Carolina Panthers: Anderson is severely underperforming compared to last season, hauling in under 50 per cent of the passes thrown his way so far. Still, there is hope as he is second on the team to only D.J. Moore in both targets and air yards. The crumbling Giants’ secondary offers a reprieve for Anderson, as they rank 22nd in passing DVOA and have proven susceptible to fast, agile receivers. In the wake of HC Matt Rhule‘s “we haven’t been committed enough to run the ball” comments, we expect a spike in 12 personnel usage, and ultimately more targets for Anderson. Expect Anderson to be a low-floor, high-variance WR2 in Week Seven.

Tyler Lockett, Seattle Seahawks: The absence of Russell Wilson, AKA, Mr. Unlimited, hurts Lockett more than anyone. In the three games that he scored more than 10 Fantasy points (against the Colts, Titans and Rams), Lockett had ADoTs of 21.6, 14.7 and 15.9 yards, respectively. He is most effective on deep balls, a philosophy that has not meshed well with Geno Smith, who managed just 6.53 yards per attempt in his first game as the starter for Seattle. Making matters worse, Lockett draws a stiff matchup in Week Seven against New Orleans, which ranks fifth in passing DVOA.

Ricky Seals-Jones, Washington Football Team: Since Logan Thomas has been hurt, Seals-Jones has taken 100 per cent of Washington’s TE snaps, with 88 per cent route participation and 26 per cent target share. It may not yet have shown up in the Fantasy score numbers, but these are strong indicators, even if accumulated for a team that prefers running the rock. This week, Seals-Jones has a decent draw against a Green Bay defense that’s already allowed three tight ends to enjoy 10-plus Fantasy point performances.

Mark Andrews, Baltimore Ravens: We don’t actually recommend sitting Andrews, but do temper your expectations as this is a divisional game against a Bengals’ team hellbent on defending the middle of the field. Cincinnati’s defense ranks eighth in pass DVOA and fourth in rush DVOA, while allowing just 4.8 Fantasy points to opposing tight ends. With the amount of injuries on Baltimore, we expect Andrews to block more, diminishing his route participation.

English electronic artist Bomb the Bass is simply an alias for musician/producer Tim Simenon. Bomb the Bass started in 1987, dissolving in 2013. It had a string of successful tunes, but for our money nothing tops insanely infectious “Bug Powder Dust,” specifically the Kruder & Dorfmeister remix from The K&D Sessions.

By Lucas Chan
This entry was posted on Tuesday, October 19th, 2021 at 10:58 pm and is filed under FOOTBALL, Lucas Chan, Start 'em Sit 'em. You can follow any responses to this entry through the RSS 2.0 feed. Both comments and pings are currently closed.