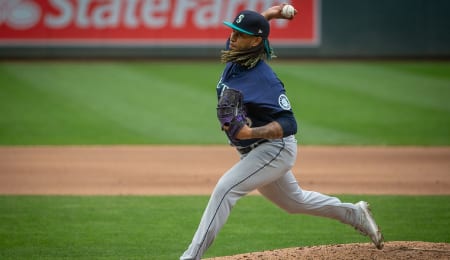 After a down year in 2020, many forgot that Keynan Middleton has closer stuff. (Bruce Kluckhohn-USA Today Sports)

Welcome back to another week of Fantasy baseball. As we near the end of May, the MLB season is just about a third done, so it’s vital you scour the wire to make some headway in your leagues.

This week, we finally found a way to stop Shohei Ohtani (put him in a traffic jam); most MLB teams have begun to relax the Coronavirus protocols; and the U.S. Olympic team will have to make due without starting pitcher Alek Manoah for the qualifying tourney next week as he was called up the bigs.

Keynan Middleton, RP, Seattle Mariners (ESPN: 3.1 per cent; CBS: 6 per cent): Seattle has been nailed with Covid and one of the casualties is Kendall Graveman, so it’s opened the door for Middleton to push his way onto the Fantasy radar. On Thursday, Middleton entered to pitch the ninth inning after presumed closer Rafael Montero took care of the eighth frame and Middleton tossed his third straight scoreless outing to finish off the shutout. Coming on the heels of Middleton earning another save on Monday, it’s clear he is now occupying a very important role in the Mariner bullpen. He had a rough season with the Angels last year, but has bounced back nicely with their rival Seattle. As a minor leaguer, Middleton got by on 99 mph heat, but as his velocity has dipped, he’s employed his slider more often. If it helps you make up your mind, he’s also not afraid to take a stand (see video below).

Owen Miller, SS, Cleveland Indians (ESPN: 1.3 per cent; CBS: 7 per cent): Miller is part of Cleveland’s revolving door at shortstop but with DH Franmil Reyes (oblique strain) out another 4-to-6 weeks, he’s getting everyday playing time. Miller is hardly killing it, but has three hits (including a double) over the last two games, so let’s see how things play out for this rookie. So far, he’s barely above replacement player level, but after murdering Triple-A pitching (.406 BA, .609 SLG) to begin the season, he’s worth a flier in AL-only leagues.

Billy McKinney, OF, New York Mets (ESPN: 0.5 per cent; CBS: 2 per cent): After the 2019 season, we questioned McKinney’s ability to remain the bigs and sure enough, he barely saw any action for the Jays last year. This season, he’s gotten a lot of PT for the banged up Brewers, and now, the Mets — even more injury-ravaged, especially in the outfield — just traded for him with news that Michael Conforto (hamstring) will be out until late June. McKinney came through in the nightcap of Thursday’s double header, scoring twice, doubling and drawing a walk. As a temporary add, he’s worth exploring in deep NL-only leagues.

Deivi Garcia, SP, New York Yankees (ESPN: 4.5 per cent; CBS: 32 per cent): Another player benefiting from injury (with news that Corey Kluber‘s shoulder will sideline him for at least two months) is Yankee prospect Garcia, No. 74 on our Top 100 Prospects list this year. Garcia is scheduled to make his season debut Saturday afternoon and has a favourable matchup against Detroit, so don’t be afraid to trot him out if you need some pitching help.

Guillermo Heredia, OF, Atlanta Braves (ESPN: 4.8 per cent; CBS: 3 per cent): Signed out of Cuba by Seattle in 2016, Heredia suddenly finds himself playing centre field in Atlanta after an injury took down Marcell Ozuna. Heredia is a solid contact hitter but hasn’t shown much extra-base pop in his career, however, with 10 doubles and a couple of dingers already, that seems to have changed for the time being. Ride him in NL-only leagues while he’s playing and producing.

Justin Verlander, SP, Houston Astros (ESPN: 4.3 per cent; CBS: 17 per cent): Are you in a dynasty league in which Verlander is on the wire? If you’ve stuck a fork in this season, he could be worth considering as he works his way back from TJS. The former Tiger ace hasn’t ruled out being able to pitch in the postseason as a reliever, but either way, he should be good to go in the Houston rotation next season. Just remember, it was less than a year ago, we were still marveling at Verlander’s prowess.

Bobby Witt Jr., SS, Kansas City Royals (ESPN: 6.1 per cent; CBS: 45 per cent): Witt isn’t tearing it up at Double-A — his extra-base sock in particular has been a letdown — but don’t be shocked to see him up in the bigs in the not too distant future. Either way, he’s a must-own Dynasty asset.

David Peterson, SP, New York Mets (ESPN: 8.1 per cent; CBS: 44 per cent): Despite a shoulder issue that slowed him down, Peterson enjoyed a fine rookie effort for the Mets last year. His record and ERA don’t show it, but he’s actually pitched better this season (his xFIP is 3.39 compared to 5.11 last year), and with news that Noah Syndergaard will be shut down for several weeks, Peterson’s role in the rotation is more secure now.

Martin Perez, SP, Boston Red Sox (ESPN: 23.8 per cent; CBS: 24 per cent): Perez has won back to back starts after hurling a season-best tying six frames and fanning seven on Friday. Suddenly, the southpaw is enjoying the best ERA of his career.

Cody Poteet, SP, Miami Marlins (ESPN: 31.4 per cent; CBS: 26 per cent): Until Friday, Poteet had been ridiculously good to begin his MLB career. Despite getting roughed up by the BoSox, He looks like he could be a staple in the Marlin rotation for the rest of the season.

Bryse Wilson, SP, Atlanta Braves (ESPN: 1.2 per cent; CBS: 6 per cent): Now that Mike Soroka is officially done for the season, Wilson is likely to see more time in the Braves rotation. Wilson had pitched brilliantly in the bigs this month, so look for him to be recalled from Triple-A, perhaps as early as next week.

And we’re back with yet another tune from Latin jazz funk band Azymuth, this from its 1983 album, Rapid Transit, among its most rhythmic efforts. The albums opens with “Make Mine Guaraná.”

By RotoRob
This entry was posted on Saturday, May 29th, 2021 at 9:53 am and is filed under BASEBALL, RotoRob, The Wire Troll. You can follow any responses to this entry through the RSS 2.0 feed. Both comments and pings are currently closed.