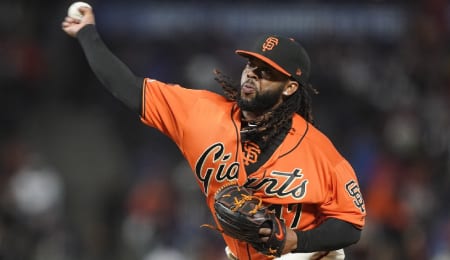 Welcome back to another week of Fantasy baseball. We’re into late-May now and just passed the one-quarter mark. At this stage, you’re starting to get a sense of whether your team is a contender or pretender. Employ the wire to reach your season goals!

This week, Jacob deGrom looked fantastic in his rehab start, so he’ll be returning to the bigs next week; Albert Pujols spanked his first long ball as a Dodger; and former Pirate closer Felipe Vazquez is in serious hot water after being found guilty of 15 sexual-related charges.

Johnny Cueto, SP, San Francisco Giants (ESPN: 34.5 per cent; CBS: 49 per cent): Cueto is getting on in years (35) and seems older than that based on the number of times he’s battled back from injury or down seasons. Well, he’s doing that thang again and while he looked a tad shaky to begin May after a superb April (1.80 ERA), he tossed a fine game on Thursday for his third win of the season, lowering his ERA to a very solid 3.34. We haven’t seen Cueto winning like this since he first arrived in San Francisco in 2016 and the big difference in his arsenal so far is that his four seamer has gone from a major liability to a passable offering, while his sinker/curve has rebounded to 2019 levels. He still throws five pitches, slightly upping his fastball usage this year (with slightly better velocity), while his curve has nearly disappeared from the mix. His cutter, meanwhile, has seen dramatically higher employment. The Giants seem to have found a recipe to get the most out of their starting pitchers and Cueto is no exception (even if his delivery defies description — see video below), so jump aboard while he’s healthy and effective.

Johneshwy Fargas, OF, New York Mets (ESPN: 0.2 per cent; CBS: unowned): Who? Yes, that’s right, we’re digging deep here, but the with the Mets outfield decimated by injury (Kevin Pillar, Brandon Nimmo, Jose Martinez, Jeff McNeil, Albert Amora Jr. and Michael Conforto are all out, plus normal left fielder Dominic Smith has shifted to first base with Pete Alonso out), Fargas has found himself playing regularly. Shortly after being recalled Fargas delivered his first career hit (a double) on Monday to drive in a run, and then added another base knock on Tuesday. On Friday, he was the hero with a two-run triple (his second hit of the game) being the difference in extra innings. This minor league veteran was taken in the 11th round by the Giants back in 2013 before being signed as a minor league free agent by the Mets in early January last year. It’s super early days, but the fact that Fargas has managed to cut his swinging strike rate from Triple-A is a promising sign, so while the Mets are battered, give him a look in deep NL-only formats.

Spencer Turnbull, SP, Detroit Tigers (ESPN: 21.6 per cent; CBS: 40 per cent): At the beginning of August we identified Turnbull as a potential breakout candidate and sure enough, he took a big step forward last year, massively improving his record and trimming his ERA significantly. Well, he’s building on that, and you might have heard something about him tossing a no-hitter on Tuesday, although this kind of event is becoming harder to track. That’s back-to-back strong outings by Turnbull who enjoyed a solid April, but is looking even better (2.70 ERA) so far in May. A Detroit starter with a winning record? Wow! Better yet, it’s backed up by a phenomenal hit rate and an improved strike zone swing rate (matching his career high set two years ago). Pick Turnbull up and enjoy his ascension into a fine starter.

Kyle Farmer, SS/2B/3B, Cincinnati Reds (ESPN: 2 per cent; CBS: 4 per cent): Joey Votto has been out for a while, and now his main replacement at first base (Mike Moustakas) is also on the IL, leaving Farmer to see everyday action around the entire infield for the Reds. Farmer hasn’t exactly lit it up offensively lately, but he did manage a pair of hits Thursday (and an RBI single Friday), giving him four multi-hit efforts in May as he’s done a much better job of getting on base so far this month. Included in the deal from the Dodgers that also brought Matt Kemp and Yasiel Puig (among others) to the Reds, Farmer has already seen more action this season than he did in 2020, so that in itself has value in a deeper format. And if Farmer can continue to recover offensively to the level he showed last year, he may even have use in slightly more shallow formats, especially considering his positional flexibility. Speaking of his D, he’s been flawless at first and second base, but not quite as strong at the hot corner or at shortstop.

British deep funk band Baby Charles is among the groovier acts in recent times. In 2008, the band released its only full-length album, an eponymous effort, and from this the first single was “Back of My Hand,” an infectious R&B stomper.

By RotoRob
This entry was posted on Saturday, May 22nd, 2021 at 11:11 am and is filed under BASEBALL, RotoRob, The Wire Troll. You can follow any responses to this entry through the RSS 2.0 feed. Both comments and pings are currently closed.