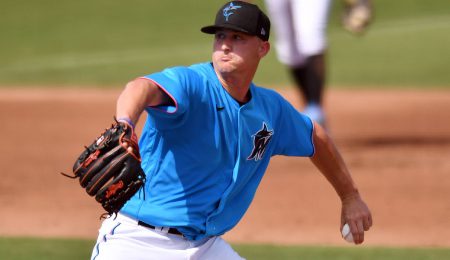 Welcome back to another week of Fantasy baseball. August and the dog days of summer have arrived, so it’s really time to keep your finger on the pulse and exploit the waiver wire whenever possible.

This week, the Cubs lost another piece when Jason Heyward hit the IL with a finger woe; J.R. Richard, who twice led the NL in punchouts, died on Thursday at the age of 71; and Trevor Bauer‘s administrative leave has been extended for a fourth time — this time through August 13 (see below for a hurler that may take advantage of this situation).

Braxton Garrett, SP, Miami Marlins (ESPN: 2.2 per cent; CBS: 10 per cent): Garrett last drew our attention over two years ago when he returned from Tommy John surgery. We correctly predicted he could work his way to Double-A by the end of that season, and while there was no minor league season last year, he did make his first two MLB starts. This season, Garrett was promoted to Triple-A, but has actually performed better in five starts and one relief outing for the Marlins. In fact, over those five starts, he’s recorded a sparkling 2.92 ERA after hurling five shutout innings with six Ks against the Mets on Thursday. If Garrett keeps throwing like that, he won’t be an unknown for long, and it’s worth mentioning that when he was taken seventh overall in 2016, his curveball was considered among the best of his draft class. Well, it seems that pitch is finally back after his long rehab process. Check out the video below the get a sense of what Garrett was capable of in high school.

Frank Schwindel, 1B, Chicago Cubs (ESPN 0.1 per cent; CBS: unowned): A relative unknown, Schwindel has taken over first base for the Cubs now that Anthony Rizzo has been traded and so far, he’s doing pretty well. Schwindel spanked his first homer as a Cub on Friday, giving him a .375 BA for August with hits in four straight games, including back-to-back two-hit efforts. At the age of 29, he’s hardly a prospect, but he’s a dude with a job at a hard to fill position and he’s currently doing everything he can to prove he deserves it for the rest of the season.

Cole Hamels, SP, Los Angeles Dodgers (ESPN: 1.6 per cent; CBS: 6 per cent): The Dodgers added to their embarrassment of riches this week with the signing of Hamels, and although he won’t be available until the end of the month at the earlier, he’s a nice stash candidate given Bauer’s uncertain future and injuries to Clayton Kershaw, Tony Gonsolin and Danny Duffy. As recently as 2018, Hamels still looked like he had plenty left in the tank, so don’t sleep on him… especially with the progress he’s making.

Kyle Farmer, SS/2B/3B, Cincinnati Reds (ESPN: 44.5 per cent; CBS: 41 per cent): In late-May we recommended Farmer, so hopefully you listened then because it’s going to be tougher to find him now given how blazing he is. He spanked another pair of singles to cash in three runs on Friday, giving him six safeties over a three-game hit streak. Okay, admittedly Farmer slumped in June after we pimped him (.210 BA), but more than made up for that by hitting .395 with 15 runs last month and continuing to scorch early on in August (.350 BA). He’s now hit safely in 13 of the last 14, including a career-best 10-game hit streak at the end of July/beginning of August.

Abraham Toro, 3B/2B, Seattle Mariners (ESPN: 26.3 per cent; CBS: 41 per cent): In mid-June, we suggested that Toro could benefit from Alex Bregman‘s injury, but what really buoyed Toro was getting dealt to Seattle, where he’s been given everyday PT. Toro delivered an RBI single on Friday, part of his third two-hit effort over the last four games to take his August BA to .435. Clearly, this dude has elevated himself from mere Fantasy reserve status.

Cal Quantrill, RP/SP, Cleveland Indians (ESPN: 32.5 per cent; CBS: 29 per cent): Quantrill has really turned it on since moving into the rotation, especially since the beginning of July (1.96 ERA and 1.04 WHIP over 41 1/3 IP). He was at his best on Friday, fanning 10 Tigers over seven shutout innings, giving him five straight starts in which he’s allowed one earned run or fewer. At this point, Quantrill has become a must-add in all leagues — especially in DFS play, in which he remains a relative bargain. He dropped off our Top Prospects Rankings in 2019, but sure has recovered.

Luis Gil, SP, New York Yankees (ESPN: 10.3 per cent; CBS: 19 per cent): With both Gerrit Cole and Jordan Montgomery on the Covid-19 list, the next wave of Yankees’ pitching prospects got a preview as Gil was brought up to make a start and wound up dazzling with six strikeouts over six shutout innings. Gil struck out 50 batters in 30 2/3 innings (!) at Double-A to force a promotion to Triple-A, where he’s had some issues, yet remains undefeated through eight starts. Expect this kid to soar up prospects lists in 2022.

English rock band Babe Ruth was active from 1970 to 1976 and then reformed in 2005, remaining at it to this day. In 1975, it released Stealin’ Home, featuring the bass work of Dave Hewitt, who later toiled with The Georgia Satellites. From this album came “Caught at the Plate.”

By RotoRob
This entry was posted on Saturday, August 7th, 2021 at 1:00 pm and is filed under BASEBALL, RotoRob, The Wire Troll. You can follow any responses to this entry through the RSS 2.0 feed. Both comments and pings are currently closed.