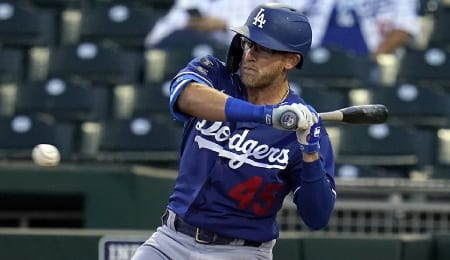 Welcome back to another week of Fantasy baseball. We’re now over two-fifths of the way through the season so there remains time to make your move. Milk that wire!

This week, Arizona’s road woes reached a record pace as the D-Backs dropped their 23rd straight game away from home; the MRI on Jacob deGrom‘s shoulder came back clean, but it’s not clear if he’ll make his next start on Monday; and Alex Bregman has landed on the IL (see below for a replacement option).

Matt Beaty, 1B/OF, Los Angeles Dodgers (ESPN: 4.9 per cent; CBS: 8 per cent): Beaty has been a very pleasant surprise for the Dodgers this season and now he’s getting a chance to play first base almost every day with Max Muncy (oblique) likely out for the rest of the month. Beaty has delivered a single in each of the last two games, but has yet to show the same kind of extra-base pop this month that he did in May (although serious power is not really his thang, especially as a corner infielder). Still, he’s already seen way more MLB action this year than he did last season, and he’s hitting better than ever. With Cody Bellinger also MIA right now, Beaty makes for a nice short-term pickup, especially if you need BA help or play in an OBP league. In very limited PT Beaty struggled last year, but check out the video below for a reminder of some of things he did right.

Domingo Leyba, 2B, Baltimore Orioles (ESPN: unowned; CBS: unowned): Second base has been a black hole in Baltimore all season, but there’s a couple of dudes at Triple-A that each vying for a promotion to the bigs. Jahmai Jones may be the more familiar name (and he’s definitely got a shot), but we’re leaning towards Leyba, who flamed out in Arizona and was waived earlier this month. The O’s claimed Leyba off waivers two weeks ago, and all he’s done is mash four homers since. Throw in his time at Triple-A Reno in the D-Back system and he’s recorded a 1266 OPS. Baltimore needs help and, as long as Leyba keeps mashing, he may return to the majors very soon. Let’s just hope it goes better than earlier this year in Arizona, when he went 0-for-22 without a run or ribbie.

Hunter Renfroe, OF, Boston Red Sox (ESPN: 31 per cent; CBS: 40 per cent): It’s now been around a year and half since the former Padre fan fave was dealt to Tampa Bay, and the move did not work out well for Renfroe. He signed with Boston as a free agent last offseason, and while things were shaky at the outset (485 OPS in April), he enjoyed a very productive May before coming back to usual career levels this month. No, Renfroe is not hitting with the same extra-base sock this season, but his K rate is at a career low, and that’s an approach that should help him get back to his 2018-19 levels. Grab him in all formats.

Robel Garcia, 2B/SS, Houston Astros (ESPN: 0.1 per cent; CBS: unowned): With Alex Bregman (quad) on the IL, Garcia will battle Abraham Toro for time at the hot corner, but our money’s on Garcia to see the bulk of the starts (although Toro started Friday and delivered a hit and a walk). Garcia is probably more of utility infielder over the long haul, but he’s had a lot of minor league success (751 career OPS), so who knows?

Luis Patino, SP/RP, Tampa Bay Rays (ESPN: 4.2 per cent; CBS: 22 per cent): Patino, No. 16 on our Top 100 Fantasy Baseball Prospects list this year, has looked progressively better since moving into the rotation at Triple-A Durham, putting himself in position as a possible replacement for Tyler Glasnow (UCL).

Hanser Alberto, 2B/3B, Kansas City Royals (ESPN: 0.6 per cent; CBS: 2 per cent): Andrew Benintendi (rib) is out, so Whit Merrifield has shifted to the outfield, with Alberto slotting in to second base (although it was Nicky Lopez manning the keystone corner on Friday). Alberto is a former top 20 prospect in the Texas system whose hitting has deteriorated since a career year in B-More in 2019, but deserves watching to see if regular PT can get him going.

Eric Haase, C, Detroit Tigers (ESPN: 15.2 per cent; CBS: 35 per cent): He’s cooled recently, but how can you ignore a catcher that smacked five dingers in four games just a couple of weeks ago?

Luis Gil, SP, New York Yankees (ESPN: 0.1 per cent; CBS: 4 per cent): Are you excited about Yankee pitching prospect Gil yet? You should be. He was recently promoted to Triple-A, so his time is nearing.

English punk/rock band The Clash churned a bevy of classics between 1976 and 1986. In 1982, the band released a double “A” side single, featuring “Should I Stay or Should I Go?” — one of the gems from Combat Rock.

By RotoRob
This entry was posted on Saturday, June 19th, 2021 at 11:48 am and is filed under BASEBALL, RotoRob, The Wire Troll. You can follow any responses to this entry through the RSS 2.0 feed. Both comments and pings are currently closed.