The Wire Troll: Another Young Astro Bat on the Horizon 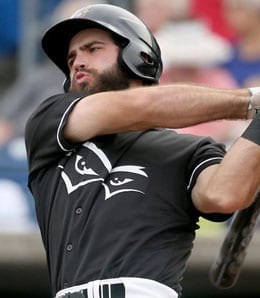 Houston has another bat on the way in Scott Schreiber. (The Quad-City Times)

Welcome back to another week of Fantasy baseball. We’re into mid-April now, and the season remains as fresh as a daisy. Work that wire to ensure you maintain that fresh feeling.

This week, the Braves locked up budding star Ozzie Albies with a seven-year, $35-million deal; Chris Davis has now gone a record 53 straight at-bats without a hit; and Scott Sanderson, a former pitcher who was with four different postseason teams over his 19-year career, died on Thursday at the age of 62.

Scott Schreiber, 1B, Houston Astros (ESPN: NA; CBS: NA): As if Houston didn’t have enough young offensive talent on the way, now it looks like it has another steal on its hands in Schreiber, the team’s ninth round pick last year. He made his pro debut at Class-A last year, and it was less than inspiring as he struggled to put up much in the way of counting cats. Schreiber is repeating the level this season, and given his dramatically improved batting eye that’s helped him to an OPS of 986 early on, he’ll be ready for the High-A very soon. The Wisconsin native — who can also play outfield — jumped out of the gate with three multi-hit efforts through the first five games. Ranked just outside the top 20 first base prospects heading into the 2018 draft, Schreiber was a serious slugger at Nebraska. And he’s clearly already got ‘star talk’ down pat, as you can see in the video below.

Shawn Armstrong, RP, Seattle Mariners (ESPN: 0.2 per cent; CBS: 1 per cent): Armstrong (oblique) is looking very sharp in his rehab assignment, so should be activated very shortly. Why this is of interest is that with Hunter Strickland out, the Seattle closing gig is pretty much wide open and Armstrong has proved he can close (15 saves at Triple-A last year). Armstrong managed better than a K per frame during his time in the bigs last year and his whiff rate at Triple-A was through the roof. He has the stuff to get the job done, so keep an eye on him.

Chad Pinder, 2B/OF, Oakland Athletics (ESPN: 14.6 per cent; CBS: 28 per cent): Pinder is looking like a decent Fantasy option — especially in DFS play (against lefties) while his salary is low. He’s hit safely in five straight games, and the first four of those were all multi-hit efforts. Pinder is showing some impressive power, doubling in three straight and homering three times so far this season, helping making up for a lack of speed. He doesn’t walk, but he’s not striking out, either, and best of all, he’s finally showing he can hit righties a bit better (.269). Pinder may still be a utility player, bouncing around the field, but he’s getting lots of chances to start this year and the way he’s playing he could cement his role early on.

Mitch Moreland, 1B, Boston Red Sox (ESPN: 14.8 per cent; CBS: 27 per cent): Moreland is on the strong side of the first base platoon in Boston, and while it’s been a couple of years since we last recommended him, he did wind up hitting better in 2017, before experiencing a power dip last year. This season, he’s off to a blazing start, having already launched five dingers through 40 at-bats. In addition to going yard Thursday — Moreland’s third straight game and fourth in five with a long ball — he delivered a game-tying RBI double. Grab the vet while he’s raking, and definitely have him active when Boston is at home as he’s a beast at Fenway.

By RotoRob
Tags: Houston Astros
This entry was posted on Saturday, April 13th, 2019 at 1:08 pm and is filed under BASEBALL, RotoRob, The Wire Troll. You can follow any responses to this entry through the RSS 2.0 feed. Both comments and pings are currently closed.