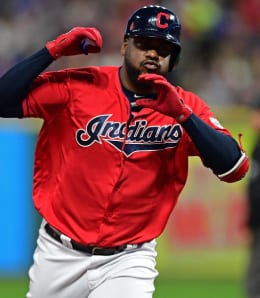 Franmil Reyes has been scorching since coming off the IL. (Sports Illustrated)

The New York Yankees have underachieved for a good chunk of the season, and much panic has ensued among its fan base as a result.

Recently, however, the team has shown signs that things are turning around. With three straight wins and a 7-3 record over the last 10 games, the Bronx Bombers have managed to move into a tie with Toronto (Buffalo) for third place in the AL East. The Yanks are now just four games back in the Wild Card race, so there’s certainly plenty of hope.

However, one area that’s really hurt this team in 2021 is some awful baserunning. As per Pinstripealley.com, the Yanks are dead last in the bigs in extra bases taken percentage (how often runners advance two bases on a single or three on a double). Despite such a lack of aggressive running, they are somehow also second worst in terms of most outs made on the bases. What?!

The good news is the Yanks’ bullpen has been really strong, ranking seventh in MLB with a 3.54 and third in WHIP at 1.16.

This despite the struggles of Aroldis Chapman. Last season, he was striken with Covid, and saw his ERA rise despite a nice bounce back with his command.

This year, Chapman has endured the worst ERA and WHIP of his career. He’s tied his career high with five wins, but when your closer is earning victories, it usually means he’s vulturing them because he’s blowing leads. Not good.

On Tuesday, Chapman earned his first save in exactly a month, blowing a pair of chances and suffering a loss in the interim. We’re not suggesting his job is in jeopardy, but he hasn’t looked like the same pitcher since the beginning of June.

Canadian instrumental band Shadowy Men on a Shadowy Planet actually won a Juno award in 1992 as Instrumental Artist of the Year. In 1987, they released Schlagers!, a seven-inch EP featuring “Good Cop Bad Cop,” which is among their more iconic songs.

By RotoRob
This entry was posted on Wednesday, July 21st, 2021 at 1:22 pm and is filed under BASEBALL, MLB Today, RotoRob. You can follow any responses to this entry through the RSS 2.0 feed. Both comments and pings are currently closed.