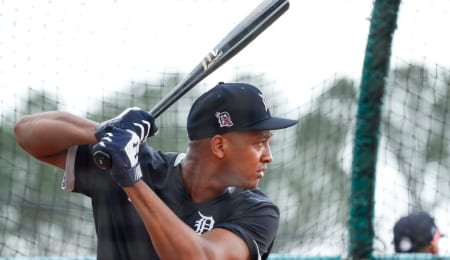 The 2020 Fantasy baseball season wraps up this weekend, so here’s hoping you had a superb campaign and that our waiver wire picks played a role in that success. This was an incredibly challenging year, forcing owners to make snap decisions as every game and every week was magnified thanks to the truncated schedule. It was perhaps more important than ever to mine the wire judiciously.

Naturally, we had plenty of misses along the way, and because of the weekly nature of our column it means that some hot free agents get scooped up days before we can tout them. But the fact is that if you managed to wind up with, say, three or four of these guys on your team, chances are you were a pretty happy camper this season.

Note that we don’t have any catchers on the team this year; the closest backstops that offered value off the wire were Jorge Alfaro and Sean Murphy, but neither were great season-long adds, so they didn’t make the cut. Max Stassi has been a nice late-season addition, but we never recommended him. Outfield was also fairly sparse, and overall, we tended to skew the column towards starting pitching this season, as it was the most required position to get through this shit show of a year.

Dates in parentheses represent when we recommended them.

Jared Walsh, Los Angeles Angels (Week 10): The Angels’ move to sign Albert Pujols suddenly looks even worse as it was clear that to some extent Phat Albert has been blocking Walsh’s path as the youngster languished at Triple-A for a couple of years. If the Halos had brought Walsh up earlier this season, perhaps they’d be fighting for a playoff spot this weekend; instead, they’ll have to settle for watching this rookie put on a masterful power display this month (see video below).

Jonathan Schoop, Detroit Tigers (Week One): Schoop has bounced around since the O’s dealt him at the trade deadline two years ago. In enjoying his best hitting season since 2017, perhaps he’ll stick around Motown for a while, although he will be an UFA this winter.

Isiah Kiner-Falefa, Texas Rangers (Week Three): Kiner-Falefa has put the ball in play more this year, enjoying a breakthrough from a slash line perspective. He hasn’t been as productive as we’d like to see, but that’s likely more a product of a very weak lineup that’s found itself breaking in a new park which skews towards pitchers. (Kiner-Falefa also qualifies at 3B.)

Alec Bohm, Philadelphia Phillies (Week Five): When we recommended Bohm in mid-August we hoped he’d add power to his BA and OBP skills. Well, he did manage a homer in August to go along with a fine .275 BA and .356 OBP. In September so far, Bohm has busted out with a .520 slugging to pair with a .370 BA and .429 OBP. The extra-base sock has been impressive, and will only build in 2021. (He also qualifies at 1B.)

Dylan Moore, Seattle Mariners (Week Four): Unfortunately, Moore’s season ended early thanks to getting plunked twice in a week and suffering a concussion, but the super utility man proved quite valuable before going down. He hit way better this year, and was much improved on the basepaths. Moore deserves a full-time gig. (He also qualifies at 2B.)

Adam Duvall, Atlanta Braves (Week Nine): Despite the shortened campaign, Duvall saw more action than last year, and while his overall numbers regressed a bit, his walk rate did rebound. While he got hot down the stretch (11 homers so far this month), he carried some teams. It will be very interesting to see how big a role Duvall gets next season and what kind of raise he commands in arbitration.

Jason Heyward, Chicago Cubs (Week Seven): Okay, so Heyward looked like crap on Friday (0-for-5 with two Ks), but he’s spent far more time playing the hero as opposed to wearing the goat horns for the Cubs this season. His counting cats haven’t been great, but he’s quietly posted a career-best 870 OPS thanks to his best walk rate ever and his highest ISO since 2012.

Adam Wainwright, St. Louis Cardinals (Week One): What a turnaround for Wainwright, who even looked decent when he lost. He enjoyed the second highest winning percentage of his lengthy career while chalking up his lowest ERA since 2015. Two years ago, retirement was being discussed, but this dude ain’t done.

Chris Bassitt, Oakland Athletics (Week One): Bassitt really emerged as a late-round pitching gem this season, earning wins at a much higher rate while setting new personal bests in WAR, ERA, WHIP and K/BB ratio. His performance this year has been extremely impressive.

Brad Keller, Kansas City Royals (Week Four): Keller’s control has dramatically improved this season, allowing him to nearly match his 2019 win total — in 19 fewer starts. Unfortunately, his already modest K rate has dipped even further as he’s really pitching to contact this season. At any rate, it’s a formula that’s worked for Keller.

Zack Britton, New York Yankees (Week One): Whether he was closing while Aroldis Chapman was Covid-striken or setting up, Britton was a great score off the wire, failing to serve up a single homer all season long. Britton enjoyed his lowest WHIP since 2016, and his numbers were supported by an FIP of 2.60. He’s consistently put up positive values –especially since becoming a reliever.

Rafael Montero, Texas Rangers (Week Five): Montero was hit harder this year (career worst exit velocity and hard hit percentage), but he got a chance to close, and that had value off the wire.

Tony Watson, San Francisco Giants (Week One): Watson generated a higher groundball rate than ever leading to a splendid season spent mostly setting up, but he also earned a couple of saves while setting personal bests in ERA and WHIP.

Atlanta hip hop band Arrested Development was considered more positive than some of the gangsta rap groups of the time. From its debut album 3 Years, 5 Months and 2 Days in the Life Of… comes “People Everyday,” which samples “Everyday People” by Sly & the Family Stone and “Tappan Zee” by Bob James.

Now it’s your turn. Let us know in the comments below which waiver wire claims panned out the best for you in 2020.

By RotoRob
This entry was posted on Saturday, September 26th, 2020 at 10:21 pm and is filed under BASEBALL, RotoRob, The Wire Troll. You can follow any responses to this entry through the RSS 2.0 feed. Both comments and pings are currently closed.