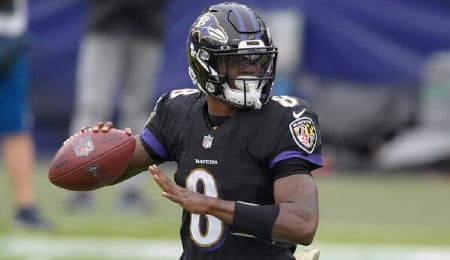 Welcome to the 2021 RotoRob Fantasy Football Draft Kit. We’ve already released several team previews, but now we’re into the real meat of the kit — the cheat sheets, today starting off with the top 15 quarterbacks.

Quarterback remains the deepest and most consistent position across the Fantasy football landscape. Once again, we advise our readers not to draft a quarterback in the early rounds, but rather invest in quarterbacks like Jalen Hurts (who we believe is talented enough, but will the Eagles’ brain trust understand his strengths and weaknesses?) and Ryan Tannehill in the later rounds. One of our favourite stacks this year is Justin Herbert, Keenan Allen, Mike Williams and Austin Ekeler for the Chargers, who we expect to be much better this season.

Note that Aaron Rodgers is missing from this list; that’s because we believe he will sit out the 2021 season. If he does somehow make it onto the field as the Packers’ starter (after all, he did renew his local country club membership), slot him in the top seven.

The annual tradition of uncovering a diamond in the rough, overdrafting high-end quarterbacks and speculating which sophomore pivot has the chops to take the next step has officially begun! Without further ado, we present the Top 15 Fantasy Football Quarterbacks for 2021.

2. Dak Prescott, Dallas Cowboys (4): All signs point to Prescott recovering from the horrific ankle injury he suffered in Week Five (hell, the Cowboys wouldn’t have given him a big new contract if they didn’t think he was fine). With barely any discernible upgrades at defense, Prescott opens the 2021 season as the most game script-friendly quarterback in the league. Before his injury, his volume equaled that of an average quarterback playing six quarters.

3. Justin Herbert, Los Angeles Chargers (NR): As we have mentioned in our Los Angeles Chargers 2021 Team Preview, the organization followed through with the promise of keeping Herbert upright. The Chargers’ offensive line is sneakily one of the most improved units in the league and can propel not only Herbert, but also Ekeler to All-Pro status. We can’t wait to see what the 2020 Offensive Rookie of the Year will do for an encore.

4. Kyler Murray, Arizona Cardinals (5): Murray has received an improved supporting cast heading into 2021 after finishing as Fantasy football’s QB2 last year despite under performing in the second half after hurting his shoulder. However, the addition of James Conner strongly implies Murray won’t get nearly as many red zone rushes.

5. Josh Allen, Buffalo Bills (NR): After accounting for 45 all-purpose touchdowns in 2020, fourth-year phenom Allen should draw more comparisons to prime Cam Newton. We are skeptical about Allen’s ability to repeat his outrageous 2020 season, however Buffalo returns all relevant offensive playmakers. Expect him to regress slightly.

6. Lamar Jackson, Baltimore Ravens (1): Jackson failed to live up to his lofty ROI expectations, and though the organization added a sure-handed, intermediate and deep possession receiver in Sammy Watkins, we don’t expect Jackson to return to his 2019 level. Still, dual threat ability gives Jackson top five QB potential, albeit in a slow paced, run-first offense.

7. Russell Wilson, Seattle Seahawks (6): It is difficult to pinpoint exactly what went wrong with #LetRussCook. Whether it was Wilson forcing throws, the predictability of play calling and personnel, or locker room friction, he has a latter half of 2020. Even with that second half swoon, he still put up 40 touchdown passes, so if he returns to a consistent level, he’s statistically due for a MVP campaign. The range of outcomes here is wide: from top three QB to bust (relative to his draft position).

8. Jalen Hurts, Philadelphia Eagles (NR): Despite a less than memorable season taking over for the crippled Carson Wentz, Hurts projects as one of the best values at the quarterback position. The addition of DeVonta Smith and the return of key linemen combined with Hurt’s innate dual threat ability pushes him into the top 10. Not stoked about the highly competitive Hurt’s potential? Maybe the video below will help…

9. Ryan Tannehill, Tennessee Titans (NR): Tannehill was among the league’s most effective quarterbacks last year, helping to elevate Corey Davis to Pro Bowl form. Despite the respectable jump in rankings from the Julio Jones trade, Tannehill is unlikely to get more efficient. However, with the defense seemingly taking a step back, Tannehill is projected for more volume and better game script.

10. Tom Brady, Tampa Bay Buccaneers (8): Tampa Bay returns 22-of-24 starters after its impressive Super Bowl run, with Brady finishing as Fantasy’s QB8 — exactly where he pegged him to be. We expect him to perform better than his debut year in HC Bruce Arian‘s system, making Brady a great candidate for late-QB strategies.

11. Daniel Jones, New York Giants (NR): This season will be a make-or-break year for Jones as he nears the end of his rookie contract. The Giants, without fault, have provided him with the best weapons he could hope for. The receiving mix of Kenny Golladay, Darius Slayton and John Ross III are backed up by Sterling Shepard, Dante Pettis and soon-to-be-starter Kadarius Toney. If Jones falters, it won’t be because he’s not surrounded by play makers.

12. Joe Burrow, Cincinnati Bengals (NR): Burrow ranked as QB16 before his ACL/MCL injury last year. Playing in a premium game script environment, he threw 40 times per game. As he enters his second year in HC Zac Taylor‘s offense, Burrow should be more efficient, especially after the addition of his college teammate Ja’Marr Chase.

13. Matthew Stafford, Los Angeles Rams (NR): The question should not be if Stafford will excel in HC Sean McVay‘s offense, but whether the QB’s body will hold up throughout the season. Stafford is the cheapest legitimate MVP candidate and he adds new dimensions to McVay’s passing attack. Plenty of Fantasy owners must be thrilled to see Stafford on the Rams.

14. Justin Fields, Chicago Bears (NR): What Carolina loses in Fields, Chicago gains. The Bears landed themselves a physically dominating signal-caller who runs a legitimate 4.4 second 40-yard dash and throws an exceptionally elite deep ball. The organization would benefit to start Fields in Week One, but because of their regressive philosophy, he carries the risk of not seeing the field until mid-season.

15. Trevor Lawrence, Jacksonville Jaguars (NR): Lawrence has one of the most polarizing rankings heading into 2021. Despite his talent, team upgrades at skill positions and a progressive philosophy downstream from HC Urban Meyer, the Jaguars will need significant contribution from their luscious quarterback to push into premier Fantasy relevance.

Late American R&B singer James Waynes was active between 1950 and the early ’60s, and is perhaps best known for the doing the first version of “Junco Partner,” a song The Clash would make much more popular many years later.

By Lucas Chan
This entry was posted on Sunday, June 20th, 2021 at 6:05 pm and is filed under 2021 Fantasy Football Draft Kit, Cheat sheets, FOOTBALL, Lucas Chan. You can follow any responses to this entry through the RSS 2.0 feed. Both comments and pings are currently closed.