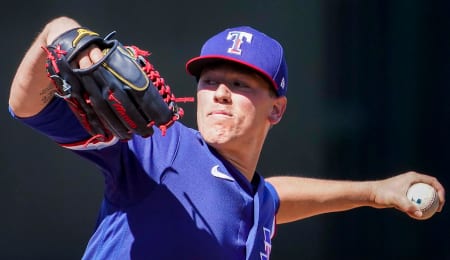 Welcome back to another week of Fantasy baseball. We’re nearly finished June and now closing in on the season’s halfway point, so it’s time to get serious about making your push. Wire time, baby!

This week, Boston came within four outs of a no-hitter before Kevin Kiermaier doubled to start a game-winning rally; Hall of Famer Yogi Berra now has a U.S. stamp in his honour; and Mike Fiers needed an injection for his elbow, so won’t even throw for another four weeks, further clouding his status for the rest of the season.

Kolby Allard, RP/SP, Texas Rangers (ESPN: 10 per cent; CBS: 18 per cent): Allard was ranked 31st in 2018 before dropping off our Top Prospect Rankings in 2019 after he was rocked in his first taste of the bigs the season before (even though he did show flashes of his potential — see video below). In fairness, he excelled at Triple-A that season, but took a step back in 2019 — when, strangely, he made progress in his time in the majors. Last year, Allard was rocked in the majors and seemingly flamed out as a rotation candidate, hence him opening the season in the bullpen with Texas this year. Early success propelled him back in the rotation at the end of May, and he’s looked really strong since, notwithstanding a rough outing on Thursday. Even so, Allard pounded the strike zone against the A’s, racking up his first walk-free start of the season. His record has definitely improved over last year’s debacle, but it’s the enhanced control that’s really caught out eye (5.35 BB/9 last year; 1.96 this season). His hit rates have also looked very strong so far this month. Given that reliever Chris Martin was meh in 2019 and has struggled this year, Atlanta is probably kicking itself for dealing Allard for Martin.

Hoy Jun Park, 2B/SS, New York Yankees (ESPN: 0.1 per cent; CBS: unowned): South Korean infielder Park wasn’t doing much at Double-A to begin the season, but he sure has taken off since a promotion to Triple-A, hitting better than he ever has since turning pro. Now, the numbers may be a bit unsustainable, but he’s put himself in position to get promoted to the Yanks, especially with the unremarkable Rougned Odor and Tyler Wade hardly posing roadblocks. There may not be great upside to Park’s game, but he could wind up as a super sub, which is intriguing as an AL-only league stash option.

Jarren Duran, OF, Boston Red Sox (ESPN: 4.8 per cent; CBS: 32 per cent): Duran is on a roll, having drilled six long balls over his last dozen games at Triple-A, so the time to add him is now. In addition to his power spike this year, he’s averaging nearly a run per game and hitting for a very fine BA (which is nothing new — he’s a .318 hitter over his minor league career). Throw in some major speed (46 steals in 2019) and you’ve got a potential future Fantasy stud here.

Luis Guillorme, 2B/3B, New York Mets (ESPN: 0.2 per cent; CBS: 1 per cent): With Jonathan Villar (calf) hurting and J.D. Davis still out, smooth fielding Guillorme has been handling the hot corner for the Mets and he finally showed a little something-something with the bat on Wednesday (single, double, walk and two runs). Guillorme isn’t exactly piling up the counting cats, but he’s an on-base machine and makes for a nice pickup in deep NL-only leagues while he’s getting nearly everyday PT.

Akil Baddoo, OF, Detroit Tigers (ESPN: 21.1 per cent; CBS: 31 per cent): Baddoo was an early-season Fantasy sensation before slumping and becoming yesterday’s news. Well, he’s back now, raking to the tune of a .367 mark over the last 31 games with hits in 10 straight games. Do note, however, that Baddoo mostly plays against righties exclusively. Still, the rookie’s power has been impressive to pair with solid speed and patience.

Chris Flexen, SP/RP, Seattle Mariners (ESPN: 23.5 per cent; CBS: 48 per cent): With three straight starts surrendering three earned runs or less, Flexen has managed to trim his ERA by nearly a full run since early June. When he was a prospect, his fastball, curveball and changeup were expected to be his best offerings, but this year, it’s his slider that has emerged as his most effective pitch. Flexen won’t help in Ks, but his ERA, WHIP and wins make him a useful asset.

Steven Duggar, OF, San Francisco Giants (ESPN: 17.8 per cent; CBS: 21 per cent): Duggar’s value is limited given that he sits against southpaws, but he’s totaled five hits over his last two starts and his numbers keep improving as the season progresses. In fact, he now sits just one run shy of matching his career high set in 2019 — despite seeing 145 fewer plate appearances. Duggar is bringing speed, power and BA to the table. What else do you want? Grab him in NL-only leagues, deeper mixed formats and as a DFS play.

Brazilian band Edgard e Os Tais put together a couple of albums in the late-’60s and early-’70s that likely would have been lost to time. However, Italian DJ Nicola Conte included the band’s “Bambe-Lo” on his classic 2008 compilation Viagem: A Collection of ’60s Brazilian Bossa Nova & Jazz Samba.

By RotoRob
This entry was posted on Saturday, June 26th, 2021 at 12:08 pm and is filed under BASEBALL, RotoRob, The Wire Troll. You can follow any responses to this entry through the RSS 2.0 feed. Both comments and pings are currently closed.