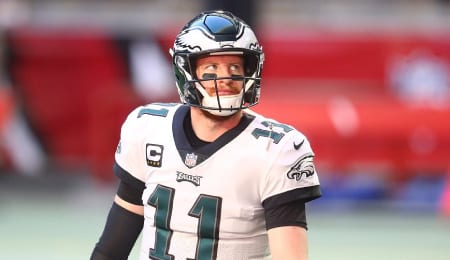 The animosity between GM Howie Roseman and Carson Wentz wasn’t just palpable — it was volcanic. Well, that’s finally come to a resolution as last week Wentz was traded to the Indianapolis Colts for a 2021 third round pick and a conditional 2022 second round pick (which becomes a first rounder if Wentz plays 75 per cent or more of Indy’s snaps in the coming year and the Colts make the playoffs).

Philadelphia’s miraculous 2018 Super Bowl run seems like a hazy memory as the city enters its third year since winning the Lombardi. Staring down the barrel of a bloated yet disgruntled roster, the Eagles had clearly signaled a rebuild before Wentz was even traded. Management/coaching turnover, as well as the second-worse situated cap room, expedited the decision.

Moving Wentz was not cheap. Because he was dealt, the Eagles will inherit $33 million in dead money as opposed to a dead cap hit of $25 million if they had released him. The Colts’ organization now has the choice of releasing Wentz in 2022 for a $22 million cap hit and no dead money. On the plus side, Philadelphia now has the following draft picks in 2021: first, second, two third rounders, two fifth rounders, sixth and seventh; and in 2022, it has first, second, a conditional second, third, fourth, fifth, sixth, seventh round picks.

Philly gambled to try to extend its championship window, and will now pay the price for the next couple of years with cap issues and a spread of picks (although, thankfully its scouting department is more capable than Detroit’s). This is a cautionary tale for other teams that have tried the same approach in the last half decade (such as the Saints, Steelers, Rams and Chiefs) and will soon have to deal with cap issues as a result.

Many believe that Wentz is not worth the conditional second-round pick in 2022 and third-round pick in 2021. However, we believe that as far as buying undervalued quarterbacks go, this is a solid deal. The more egregious mistake would have been to waste away the loaded roster on an unproven rookie. Reunited with his ex-OC Frank Reich — who is now the HC in Indy — the 2021 season for Wentz is developing similar to Philadelphia’s 2018 season — good but not great. Expect the Colts to free up Wentz at the line of scrimmage and to play a more up-tempo RPO offense.

Let’s explore the Fantasy ramification this trade will have on both teams.

The headache begins with quarterback Jalen Hurts. The problem isn’t whether he’s talented enough, but whether the organization understands his strengths and weaknesses. In five games last year, Hurts completed 52 per cent of his 144 attempts for 1,061 yards, six touchdowns and four interceptions. In a nutshell, he’s the ultimate double-edged sword — either getting sacked to death, or driving the ball downfield effectively. Philadelphia needs to quickly figure out a scheme for Hurts to save themselves from embarrassment for the foreseeable future.

Despite weakness on the left side of the offensive line, C Jason Kelce, RG Brandon Books and RT Lane Johnson are all poised to return and anchor the front. Sophomore phenom running back Miles Sanders tallied 867 yards on 164 carries and six touchdowns on the ground, and 28 receptions on 52 targets for 197 receiving yards. We think he’ll hit his ceiling in his third year. Instead of the attack focused on throwing to Zach Ertz and Alshon Jeffery, the era of Hurts, Sanders, and Dallas Goedert will be ushered in.

Stepping around the aforementioned dusty corpses of Ertz and Jeffery, young guns Travis Fulgham and Jalen Reagor should be in line for targets after Sanders and Goedert. We are particularly interested in Fulgham’s development while Reagor will likely play the role of now departed burner DeSean Jackson. An observation about Goedert: he was split out wide more than any tight ends other than Travis Kelce and Darren Waller, so he’s in line for bigger plays.

If Wentz can hit his stride with Reich, he can play at a Pro Bowl caliber level given the dominance of the O-line and his supporting cast. The most important thing now is chemistry — with teammates, coaches and staff.

We don’t expect Wentz to improve or downgrade the backfield since Reich’s division of playing time is carved in stone. The return of Marlon Mack complicates Jonathan Taylor‘s ability to repeat his stellar rookie season. Nyheim Hines, a third-down back, is likely to play 25 to 30 per cent of the RB snaps.

We say farewell to T.Y. Hilton and welcome Michael Pittman Jr. and Parris Campbell, who missed all but two games after suffering a knee injury, but got tons of snaps when he was healthy. Pittman Jr. rightfully draws comparisons to the late Vincent Jackson (rest in peace) and is line for a high ceiling season as Wentz’s alpha receiver (think Jeffery in 2018)… that is, if Wentz isn’t too mad about his jersey number. (For a great take on JerseyGate, see the video below. We can’t possibly add to this.) Gadget receiver Campbell gets a slight downgrade from Philip Rivers retiring, but if he remains healthy, he can be an explosive and functional part of this offense. Tight ends Jack Doyle, Mo Alie-Cox and Trey Burton will all benefit from a younger quarterback.

By Lucas Chan
This entry was posted on Saturday, February 27th, 2021 at 7:34 pm and is filed under FOOTBALL, Lucas Chan, Transactional analysis. You can follow any responses to this entry through the RSS 2.0 feed. Both comments and pings are currently closed.