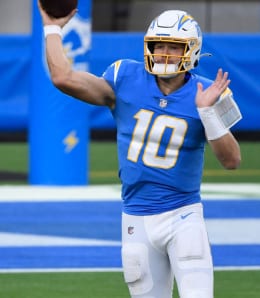 Drafting Justin Herbert last year may wind up being the Chargers’ most meaningful decision over the next decade (even if the team kind of wasted his epic rookie season with awful play calling). After all, in 15 starts as a rookie, all he did was complete 396-of-595 passes (66.6 per cent rate) for 4,336 yards with 31 touchdowns against 10 interceptions and — more importantly — win over the locker room immediately (see video below). For comparison, Aaron Rodgers completed 341-of-536 (63.6 per cent) for 4,038 yards with 28 touchdowns and 13 interceptions in 16 games in his first season as the full-time starter (2008). That’s some food for thought.

Therefore it comes as no surprise that former Rams’ DC and new Charger Head Coach Brandon Staley reiterated that Herbert’s development will be priority one, and it’s a decision that has the coach earning confidence among the fan base. That heavy responsibility falls on newly inaugurated OC Joe Lombardi, who previously toiled as the quarterback coach in New Orleans. Beyond the complete reshuffling of management, the Chargers have also made a lot of robust offseason transactions, especially in the area of helping Herbert stay upright — much needed after the team finished dead last in pass block win rate in 2020.

As discussed above, the offseason plan has all been about protection for Herbert. Drafting OT Rashawn Slater in the first round wasn’t enough for the Chargers, so they went out and acquired C Corey Linsley (ranked just outside the top 10 cent at his position by ProFootballFocus) from the Packers. The team also added former Pittsburgh Steelers guard Matt Feiler (ranked nearly within the top third at his position by PFF), although he comes with significant risk after missing the final few weeks last season thanks to a torn pectoral muscle.

Finally, Los Angeles also signed G Oday Aboushi (ranked within the top third at his position by PFF), constructing one of the most versatile offensive lines in the league and opening up the possibility of more play action for Herbert. Furthermore, Lombardi looks committed to scheming more plays that will leverage Herbert’s mobility.

When assessing Herbert as a Fantasy asset, only Patrick Mahomes, Lamar Jackson, Dak Prescott, Kyler Murray and Josh Allen should be valued higher. One note of caution: we believe the Chargers’ game script will be significantly less favourable compared to last year as Staley continues to shore up the defense. Still, expect Herbert to clear 4,000 yards and 30 touchdowns with more rushing attempts.

Austin Ekeler will clearly be the starter for the Chargers, but we expect Lombardi to feature him in an RBBC with Justin Jackson. Ekeler will be a surprising benefactor from the changes to the offensive line and coaching scheme. Through its linemen acquisitions, Los Angeles is signaling a shift towards outside power run schemes, so expect Ekeler to have an easier time finding the sidelines (4.4 second 40 yard dash) than smashing it up the gut like last year.

Of greater important for Fantasy owners, Ekeler looks ready to sustain his 100+ targets from each of the previous two years, so we expect him to finish the season as a top 10 running back barring injuries. Jackson and Joshua Kelley will operate as Ekeler’s relief runners, with the former being employed as a specialist in heavy personnel/goal line situations.

The duo of Keenan Allen and Mike Williams are likely to absorb an unsustainable amount of targets in 2021, especially Williams, so don’t be surprised if opposing defenses catch on as the year progresses. Allen will play as the slot hybrid, operating as the X receiver in two wide receiver sets with Williams as the Y, while 2021 third round pick Josh Palmer will fill in as the extra receiver in three or more wide receiver sets.

Remember when Calvin Johnson and Golden Tate played on the same team? Well, the same scheme will be implemented in Los Angeles. Allen and Williams are likely to lead the team in targets, seeing close to 50 per cent of Herbert’s passes, followed by Ekeler’s projected 104 targets, then TE Jared Cook. We expect Allen and Williams to each clear 1,000 yards, with the former seeing more targets but generating fewer yards and touchdowns and the latter with fewer targets but more efficiency, yards and touchdowns. Both are Fantasy WR2s.

The addition of Cook may be the most overlooked roster change for the Chargers. Los Angeles has shifted to an offense resembling the Saints in mid 2010s — a power run scheme with vertical passing. We expect Cook to excel in the red zone, while providing high level blocking for Herbert and Ekeler.

Under former DC Gus Bradley, the Chargers played variations of Cover 3 on the majority of their defensive snaps, however, under Staley, the Rams only played Cover 3 35 per cent of the time last year. Staley prefers to split the safeties in Cover 2 to neutralize receiving threats foremost, so that will likely add stress to DT Linval Joseph and the run stopping crew in exchange for better coverage in the back end.

The addition of rookie CB Asante Samuel Jr. bolsters a weak secondary consisting of Michael Davis, Tevaughn Campbell and Chris Harris Jr.. Healthy seasons from Harris and Derwin James should boost the Chargers’ secondary to the top half of the NFL… not elite, but definitely better.

Jazz composer Thomas Wright Scott, better known as Tom Scott, is also an arranger, and — sadly — is perhaps best known as a member of The Blues Brothers. Now, it’s not that we don’t love the Blues Brothers, but his solo career deserves plenty of attention, too. Here’s another track from his 1977 effort, Blow It Out — “Shadows” — which includes a superb sax solo.

By Lucas Chan
This entry was posted on Thursday, June 10th, 2021 at 2:24 pm and is filed under FOOTBALL, Lucas Chan, Team report. You can follow any responses to this entry through the RSS 2.0 feed. Both comments and pings are currently closed.