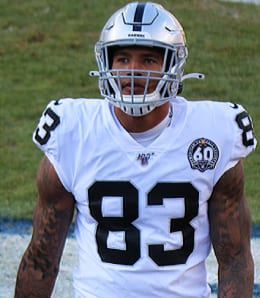 Darren Waller has become of the top ranked tight ends in the game. (Jeffrey Beall)

Welcome back to the 2021 RotoRob Fantasy Football Kit. It’s time for another cheat sheet as we check out the top 20 tight ends for the 2021 Fantasy football season.

Last season the Fantasy landscape for tight ends was a minefield as two of the top five picks busted at their respective ADPs. Last year, the TE1 doubled the points of TE3, however, 2021 features a less polarized field but more uncertainty so we encourage our readers to use our list to hammer out value (and beat risk) at this position.

1. Travis Kelce, Kansas City Chiefs (2): Kelce’s positional dominance warrants first-round consideration in all Fantasy formats. The Chiefs returns a healthy Patrick Mahomes and a rebuilt offensive line, both boons for the perennial All-Pro Kelce, who finished as TE1 last season and paced the team in targets both in the regular season and in the playoffs.

2. Darren Waller, Las Vegas Raiders (6): Derek Carr‘s favourite target vacuum has five-or-more catches in 23 of last 32 games. With no significant upgrades among pass-catchers, Waller is poised to dominate target share in Las Vegas once again. Furthermore, he ranks first in red zone targets (21 completions), but only snagged six touchdowns. Some believe he should be a tier lower, but there is still room for improvement, so it’s pretty clear where we stand on the question posed in the video below. By the way, Waller missed plenty of time early on in training camp, but looked himself in no time upon his return.

3. Kyle Pitts, Atlanta Falcons (NR): The departure of Julio Jones opens the door for Pitts to have a featured role as a rookie. We expect the freakish athlete to line up as a wide receiver (clone of Waller) in shotgun sets, siphoning Jones’ eight targets per game. Additionally, we trust HC Arthur Smith to employ Pitts in the end zone, just as he had with Jonnu Smith (who converted eight touchdowns on 19 targets in 2020). Pitts is poised to be the most dynamic rookie of 2021.

5. Mark Andrews, Baltimore Ravens (3): Even in a season of major regression in which he missed two games last year, Andrews ranked sixth among all tight ends. He remains the undisputed target hog in Baltimore, but the additions of Sammy Watkins and Rashod Bateman is worrisome, especially in an offense that ranked bottom five in pass attempts in the past two years.

6. Logan Thomas, Washington Football Team (NR): Last year, Thomas managed to squeeze a career best line of 72-670-6 from Washington’s clown fiesta of a quarterback carousel. He now gets gunslinging Ryan Fitzpatrick, a QB capable of peppering quality targets to him in HC Ron Rivera‘s offense in true Greg Olsen fashion. After emerging as a legitimate force last year, Thomas could take it to the next level in 2021.

8. Dallas Goedert, Philadelphia Eagles (15): Goedert is the most obvious breakout candidate for 2021, if the Eagles move away from Zach Ertz as their primary tight end. Last year, former HC Doug Pederson masterminded 169 targets to tight ends and we expect this trend to continue under new HC Nick Sirianni as he’s a disciple of Frank Reich who was the brains behind Philadelphia’s 2017 Super Bowl-winning offense. And with a young QB like

9. Hunter Henry, New England Patriots (7): In addition to Smith, Belichik added a Rob Gronkowski-esque (6’6″, 265 pounds, 4.73-second 40-yard dash) type of player in Henry (6’5″, 250 pounds, 4.73-second 40-yard dash) to his throw-back offense. As we’ve alluded to above, both Henry and Smith will vie for second place in targets. While Smith should out-target Henry, the latter should dominate red zone touches.

10. Tyler Higbee, Los Angeles Rams (8): With Gerald Everett gone and strong signals from HC Sean McVay of a return to 2018’s famed 11 personnel offense, Higbee is primed for a strong year. Expect Higbee to clear 60 targets and 600-plus yards with five or six touchdowns, and the upgrade at quarterback in Matthew Stafford making him a nice sleeper pick.

11. T.J. Hockenson, Detroit Lions (NR): New OC Anthony Lynn and HC Dan Campbell are projecting a simplistic offense featuring D’Andre Swift and Hockenson amidst the talent shortage. Despite the healthy conditions, it is worth noting that under Lynn for the Chargers, Hunter Henry never turned in a season with more than 700 yards, even on 90 targets.

12. Noah Fant, Denver Broncos (12): Fant returns to a crowded pass-catching corps that will be fed by Drew Lock or Teddy Bridgewater in HC Vic Fangio‘s offense. Watch for an uptick for 11 personnel and higher quality targets for Fant through play action. He finished as Fantasy’s 11th-ranked tight end in PPR points per game last season.

Charles Aznavour was born Shahnour Vaghinag Aznavourian, wisely opting to shorten his moniker despite that catchy original handle. From his 1994 compilation album, 40 Chansons D’or, here’s “For Me, Formidable,” a song that’s been covered several times over the years.

Jefferson picked up 1,400 receiving yards in his rookie season in a hyper-concentrated offense. We expect him to command a target share of over 20 per cent in his sophomore year.