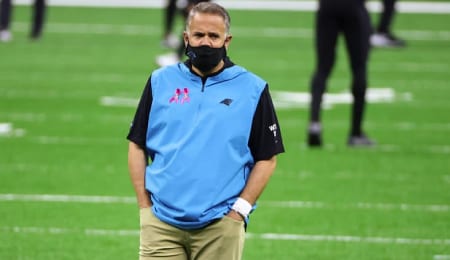 Former Panther quarterback Teddy Bridgewater recently expressed his frustration with the lack of organizational preparation on field, especially during the two minute drill (see video below). If this is true, Panthers fan may have to stomach further mediocrity during HC Matt Rhule‘s reign, appropriate since the team signed Sam Darnold rather than drafting Justin Fields. Carolina now has the second highest dead money in the league ($40 million) in a reduced cap year. Welcome to hell, Panther fans.

The most recent odds project Carolina Panthers to earn 7.5 wins. However, that almost seems a little optimistic, especially coming off a 5-11 season with another new quarterback, not to mention retooling a bloated defense that ranked in the bottom third of the league. More realistically, the Panthers are likely to improve to an extent simply based on the fact that Drew Brees (and perhaps Julio Jones) are leaving the NFC South, but how much better they’ll actually be is another question. We really like Carolina’s offense from a Fantasy production potential, but we are certain they are not a 8-9 team, and think six wins seems like a more realistic outcome.

After his fifth year option was exercised by the Panthers, Darnold finds himself with the best supporting cast in his professional career. Unlike Jacksonville and the Jets, the Panthers are implementing the opposite of a Mike Shanahan offense: the spread. The offense is predicated on “spreading” the defense out of the shotgun/pistol, and attacking vertically outside, a scheme that is not unfamiliar to Darnold from his USC days. He will also have Christian McCaffery at his disposal out of the backfield.

Despite cocaine enthusiast Adam Gase‘s flaccid coaching with the Jets, Darnold ranked sixth in completions inside a clean pocket. If the Panthers keep Darnold upright, he can move the ball down the field. We expect him to contend for a Pro Bowl spot this year, and wind up as a pleasantly surprising high-end QB2.

Although we did suggest there was uncertainty with CMC heading into last year, he is a known commodity. We believe the question worth asking is not whether he can produce another 1,000/1,000 season, but rather his commitment to the game. We did not like what he did last year when things started out with a high ankle sprain, costing him eight weeks, and then after returning, he got hurt again. We think there are two questions worth asking: (a) did McCaffery sit out last season because of injury or was it something else; and (b) does he even want to play? For Fantasy purposes, we suggest forgoing CMC for Dalvin Cook as the first overall pick in PPR leagues.

In his first season under Rhule’s rule, Robbie Anderson saw 136 targets, catching 95 of them for 1,096 yards and three touchdowns. With Bridgewater under centre, Anderson saw an average depth of target of 13.6 yards, air yard share of 42 per cent, a 26 per cent target share, and 0.66 WOPR, all the ingredients for a WR1. With Darnold aboard, Anderson is likely to produce an even better season, especially in the touchdown category.

Although D.J. Moore put up a decent season, Rhule is going to move him into a slot hybrid position (think Mohamed Sanu) and install Terrace Marshall Jr. on the outside. Although he proved himself capable lining up across from Anderson, we believe Moore’s best role is in the slot. With Curtis Samuel gone, his 97 targets will likely be absorbed by Moore, assuming Moore shifts to the slot. Meanwhile, Moore’s 119 targets will likely go to Marshall Jr., who will probably be the pure deep threat Y-receiver.

We are incredibly high on the skill pieces of this offense. Rhule’s target distribution is 94 per cent spread across his top three receivers, so there is an argument to be made to draft all the pieces of the Panthers’ offense — even Darnold who could prove to be a very valuable backup/bye week option.

Barring an injury to the three leading wide receivers, the Fantasy landscape for tight ends in Carolina is bleak. Last season, the team’s tight ends combined for just 26 catches on 42 targets for 195 yards and two touchdowns. Avoid at all cost.

Last season, Carolina’s defense ranked 24th in total DVOA, 23rd in passing defense and 20th in rushing. Since January, the Panthers have released DT Kawann Short, DE Stephen Weatherly, FS Tre Boston, while adding CB Rashaan Melvin from Detroit and Jaycee Horn, taken in the first round last month. The defense looks putrid still, and while Horn was deservedly drafted high, the unit didn’t get much better for the cost. Between Weatherly and Short, the Panthers have throw $13 million into dead money.

The good news is Carolina’s D is young and they have a great up and coming talent in edge rusher Brian Burns, who at the tender age of 22 ranked ninth in the NFL in quarterback pressures and 14th in sacks.

Canadian singer Chantal Kreviazuk got her start in 1996 and is still going strong today. In 2002, she released her third album, What If It All Means Something, and the U.S. version of this effort included the bonus track, “Feels Like Home.”

By Lucas Chan
This entry was posted on Tuesday, June 1st, 2021 at 7:41 pm and is filed under FOOTBALL, Lucas Chan, Team report. You can follow any responses to this entry through the RSS 2.0 feed. Both comments and pings are currently closed.