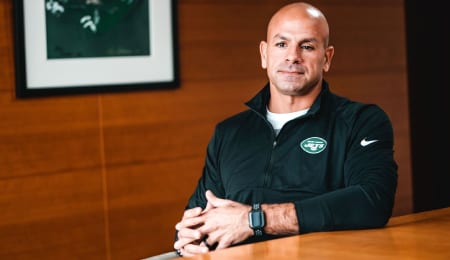 The inauguration of new Jets Head Coach Robert Saleh and his infectious personality (see video below) was followed by the hiring of seven coaches with a connection to his days with San Francisco — five from the 2020 staff including Offensive Coordinater Mike LaFleur. The defense staff had new hires too, also influenced by Saleh. Defensive Coordinator Jeff Ulbrich and Safeties Coach Marquand Manuel are both connections to Saleh from his Seattle days. The only two holdovers from the previous regime are Quarterback Coach Rob Calabrese and Special Teams Coach Brant Boyer, who seems to keep surviving coaching changes in New York.

Bookies peg the Jets to total 6.5 wins in 2021, but we are not as optimistic. Saleh is not an offensive coach, nor does he have experience in rebuilding a team. Further, we remain skeptical about the right side of the offensive line, so a 6-11 season seems more appropriate.

With LaFleur leading the offense, the Jets are likely going to be a heavy-run team with one caveat: more play action. Fitting Zach Wilson into the quarterback-friendly Mike Shanahan system will allow the rookie more time to process his reads on bootlegs/play-action. Forcing rhythm into Wilson’s footwork will be crucial to his success as rolling him outside of the pocket and playing into his habit for off-platform throws offers another kernel of advantage.

We expect the offense to leverage Wilson’s ability to extend plays with his legs. Despite the rookie playing in a pseudo-Shanahan style West Coast offense at BYU, questions remain on whether he will be able to compete at the highest level coming out of a weak collegiate conference. Moreover, Wilson excelled at throwing outside the numbers and deep along the sidelines, but hasn’t had much experience synchronizing his timing to make quick throws over the middle.

The running back roster features the corpse of Tevin Coleman, perennial disappointment La’Mical Perine, Ty Johnson from Detroit and rookie Michael Carter. Similar to Jacksonville, the Jets are currently transitioning to a outside zone heavy team. The Jets organization put an emphasis on drafting more speed in the backfield and ended up with the undervalued but potential stud Carter (4.30 second 40-yard dash).

We expect Carter to take over primary duties between the 20-yard lines, with Coleman and Perine contributing in third down, short yardage and goal-line situations. We also expect more check downs to the running back within this vertical West Coast offense.

If Carter ends touching the ball 60 per cent or more of the time, then expect him to rush 200+ times for 800 yards while recording 30+ receptions.

Corey Davis, acquired from Tennessee via trade, is likely to play the X-receiver in LaFleur’s pseudo-Shanahan offense. Despite the Y-receiver being coveted within this type of offense, we believe LaFleur will break from Shanahan traditions and force feed Davis as a possession receiver, while supplementing the other side of the field with speed. Davis should draw comparisons to how Brandon Marshall did in 2015 on the Jets. Expect Davis to clear 80 receptions, 1,000 yards and 10 touchdowns.

The team’s wide receiver mini camp will be fiercely competitive as Denzel Mims has shown he can fill the Y-receiver slot and is currently atop the depth chart. Backing up Mims is Keelan Cole, an acquisition from Jacksonville who possesses similar skills and physique. We expect the starter to clear 40+ receptions, 600+ yards and around 6-to-8 scores.

The nickel features dusty Jamison Crowder and rookie phenom Elijah Moore, a draft pick that we wrote should not be pigeon holed and should be moved around the formation, but the Jets are trending towards dedicating him to the slot. While second on the depth chart, Moore can bring electricity to a position grayed by Crowder’s pathetic ADoT (average depth of target), history of injuries and flaccid YAC. We are bullish on Moore, forecasting him to have 50+ receptions, 800+ yards and around 4-to-6 touchdowns.

Traditionally, athletic tight ends like Christopher Herndon and Ryan Griffin have made great receiving options over the middle within this style of offense, but we are extremely doubtful about Wilson’s ability to throw inside the numbers. Similar to the situation in Jacksonville, unless there is a drastic target distribution shift away from the WR3/slot, Jets’ tight ends are likely to be a Fantasy dead zone.

Saleh has vowed not to micromanage the defense and plans to leave it in the hands of Ulbrich with only minor input, but we know better. The front will feature a 4-3 under, moving Quinnen Williams to the weak side as a defensive tackle. Saleh and Ulbrich went on to retool the entire defense, pairing Williams with Sheldon Rankins from New Orleans, and Carl Lawson from Cincinnati. The linebacker group features C.J. Mosley in the middle with Jarrad Davis and Blake Cashman on the outside.

The Jets’ vulnerable secondary has been bolstered by LaMarcus Joyner at safety, rookie Michael Carter III at right cornerback and a slew of rookie left cornerbacks to shore up a weak position manned by Blessuan Austin and Corey Ballentine. On paper, this defense seems already much improved (not difficult considering the unit surrendered the ninth most yards last season), but we shall see.

Here’s Drum and Bass artist Tripon with “Hop, Skip and Jump Up.”

By Lucas Chan
This entry was posted on Thursday, May 20th, 2021 at 6:43 pm and is filed under FOOTBALL, Lucas Chan, Team report. You can follow any responses to this entry through the RSS 2.0 feed. Both comments and pings are currently closed.