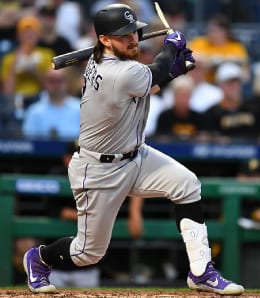 Brendan Rodgers’ bat has been impotent so far. (Last Word on Sports)

Welcome back to another week of Fantasy baseball. June has arrived, pushing us past the one-third mark of the season, so it’s high time to ramp up your quest for a title, and the wire is a great place to start.

This week, Madison Bumgarner‘s resurgence has been put on hold thanks to a shoulder woe forcing him to the IL; Reds pitching prospect Vladimir Gutierrez earned his first MLB victory; and ChiSox Manager Tony La Russa moved to within one career win of tying John McGraw for second place all-time among managers.

Brendan Rodgers, 2B, Colorado Rockies (ESPN: 5.1 per cent; CBS: 31 per cent): Given his struggles to gain traction in the majors in both 2019 (when a shoulder injury cut short his season) and 2020, Rodgers dropped off our Top 100 Prospects list this year. However, with Trevor Story currently on the IR, Rodgers has shifted over to shortstop and is seeing everyday PT, which makes him an intriguing option yet again. While Rodgers managed a double and three RBI on Thursday and a couple of hits Friday, he really hasn’t done much with the stick to warrant our love, but the opportunity is there right now and he’s certainly been a bit more productive so far this season than he was last year. This guy was still Colorado’s top prospect heading into 2020, so it seems way too soon to give up on a potential All-Star talent, and now’s your chance to see what he can do. We’d love to see Rodgers tap into the power he flashed this spring (see video below).

Ehire Adrianza, 3B/OF, Atlanta Braves (ESPN: 0.7 per cent; CBS: 2 per cent): Now that Marcell Ozuna has been arrested, he’s unlikely to return to the Braves this season, leaving a gaping hole in left field. While Atlanta may make a trade to address this situation, for now they have turned to Adrianza (after Abraham Almonte couldn’t grab the gig and run with it). Adrianza isn’t exactly seizing his opportunity either, but at least he had drawn walks in three straight (adding a hit on Wednesday) and putting up another hit Friday. He’s actually already seen nearly as much action as he did last year with the Twins and he’s hitting better. Not great… but better. Adrianza has definitely shown he can provide periodic offensive sparks off the bench, but as a starter, there are questions. Still, as a short-term option in a very deep NL-only league, he’s worth a flier.

Bryce Elder, SP, Atlanta Braves (ESPN: NA; CBS: unowned): Atlanta’s fifth round pick last year is pitching extremely well in his pro debut at High-A, tossing his finest outing yet on Thursday as he pitched shutout ball into the sixth inning. Overall, Elder gave up just one unearned run over six frames while fanning 10 without a walk. He’s recently added a curveball to his arsenal and it reportedly already looks like a plus pitch. Elder is undefeated through his first half dozen starts and could push for a promotion to Double-A if this success continues. Dynasty league owners take note.

Ryan Yarbrough, SP, Tampa Bay Rays (ESPN: 26.9 per cent; CBS: 40 per cent): It’s been nearly four years since we last pimped Yarbrough, suggesting that keeper league owners should pay attention. He enjoyed a decent rookie season despite some minor control issues before following that up with a career year in 2019. Yarbrough’s record left something to be desired last year despite a career-best in ERA, but it’s bounced back this season capped off by a complete game six-hitter with six Ks and no walks on Thursday against the Yankees. He wound up throwing 113 pitches (who does that anymore?) while lowering his ERA to 3.95 after a shaky start to the season. Fantasy owners that invested in Yarbrough are starting to see a return on their investment after he tossed the first complete game of his career and the first by a Ray hurler since May 2016.

Willy Adames, SS, Milwaukee Brewers (ESPN: 19.2 per cent; CBS: 37 per cent): Adames, a graduate from our 2018 Top Prospects list, got off to a tough start this year as his power continued to slide. That, combined with the fact he was blocking Tampa Bay’s top prospects, prompted the team to trade him to Milwaukee a couple of weeks ago. It’s a deal that’s paid immediate dividends for the Brewers as Adames has been racking up the counting cats and showing better on base skills than ever before. His underlying numbers suggested that it was just a matter of time before he got his act together and now it’s Milwaukee that is being rewarded. We really like Adames in all formats going forward, and if he keeps hitting and gets shifted up in the lineup, look out!

Late great American soul god Curtis Mayfield got his start in 1956 and remained active until his death in 1999. In 1972, he released his third album, the soundtrack to the Blaxploitation classic Superfly. Here’s the iconic title track.

By RotoRob
This entry was posted on Saturday, June 5th, 2021 at 11:01 am and is filed under BASEBALL, RotoRob, The Wire Troll. You can follow any responses to this entry through the RSS 2.0 feed. Both comments and pings are currently closed.