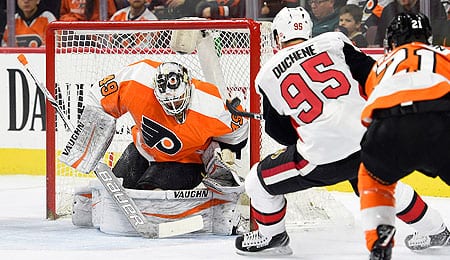 Alex Lyon has been a revelation in the Flyer net. (nbcsports.com)

Welcome back to another week of Fantasy hockey. This will be the final NHL Wire Troll of the season, given that the season ends in just over two weeks. We hope that our Fantasy hockey waiver wire recommendations have helped you get deep into your playoffs or remain in contention in your roto format.

This week, Florida Panthers founding owner Wayne Huizenga passed away just as his hockey team is red hot and pushing for a playoff spot; Detroit defenseman Mike Green is done for the season as he needs cervical spine surgery, so time to dump him (we’ve got some replacement suggestions below); and former NHL forward and current broadcaster Eddie Olczyk is now cancer-free.

Alex Lyon, G, Philadelphia Flyers (ESPN: 2.5 per cent; CBS: 4 per cent): With both Brian Elliott and Michal Neuvirth nursing injuries, the Flyers made a low-cost acquisition to bring in Petr Mrazek to tend net. However, Mrazek has been spotty as best, often needing to be pulled early. Perhaps Lyon has been Philly’s temporary solution in net all along, as he’s been very steady of late, recording at least a .917 save percentage in each of his last four games. Through 10 games (six starts), the rookie now has a sub-2.50 GAA, leading us to believe he’ll be in net Sunday in the huge matchup against Pittsburgh. Neuvirth hopes to rejoin the team on its upcoming road trip, so that could further cloud the situation, but Lyon has shown a strong goaltending technique, proving he can get the job done despite the fact that when he was originally recalled, he was expected to pretty much ride the pine. But after a rough start, Lyon has really turned things around, very infrequently letting in softies like the one in the video below, making him an intriguing short-term addition.

Bryan Little, C, Winnipeg Jets (ESPN: 34.4 per cent; CBS: 43 per cent): Little’s had a tough season, but he’s coming on a bit now (1-2-3 in the last three games) and could be in line for a nice short-term boost in productivity as he’s expected to take Patrik Laine’s place on the top line with the sniper out up to two weeks. Playing for such a solid team, Little’s plus-minus numbers have been a tad disappointing, especially lately (he’s only even in March), so hopefully that will trend up, too. The eight-time 40-point man has a chance to finish strong, so give him a look. The fesity Little is a real leader on the young Jets, and with an assumed increase in PP time, this could be the exact spark he needs to regain his goal scoring touch.

Neal Pionk, D, New York Rangers (ESPN: 16.4 per cent; CBS: 11 per cent): As discussed in our intro, if you lost Green, perhaps consider Pionk as a replacement. Pionk has been rolling lately, picking up an assist Thursday — his sixth straight game with at least one helper (eight in total over this stretch). He’s averaging nearly a point per game in March and really opening up some eyes with his rookie effort. Pionk is also unafraid to play a physical game (he knocked Vladimir Tarasenko out last week and has 31 total hits in 20 games).

Ryan Donato, C, Boston Bruins (ESPN: 8.6 per cent; CBS: 13 per cent): Donato has wasted no time in making an impact, scoring two goals and adding two assists in his first two NHL games. The Boston-born youngster has instantly announced himself as a rising star. Donato first came on our radar after a brilliant high school career prompted the Bruins to pick him 56th overall in 2014. You’d be wise to follow suit and add him to your Fantasy roster.

Keith Kinkaid, G, New Jersey Devils (ESPN: 22.2 per cent; CBS: 26 per cent): With starter Cory Schneider struggling, Kinkaid is making in-roads in the Devil net. On Friday, Kinkaid stopped 40 shots to earn his 20th win of the season. After putting up his first shutout of the season last week, he now has a .929 save percentage over his last five outings while going 7-2-0 over his last nine. Kinkaid is rolling in March, having racked up five wins with a 2.66 GAA, and overall this season, he’s more than doubled his previous career high in wins.

Anthony Beauvillier, LW, New York Islanders (ESPN: 5 per cent; CBS: 24 per cent): Beauvillier was on fire in January before slumping in recent weeks. However, he potted two goals on Thursday and given his seeming propensity for scoring goals in bunches, it may be time to jump on him again. Beauvillier has already surpassed his shot total from all of last season, and with seven combined shots over the last three, it’s clear he’s again getting his chances. He also picked up an assist Thursday, playing 16:24 — his most action in a week.

Ryan Pulock, D, New York Islanders (ESPN: 14.5 per cent; CBS: 30 per cent): Still with the Isles, Pulock is another option for those of you that got burned by Green’s injury. Pulock fired home a pair of goals Thursday, giving him three goals and five assists over the last five games. The 23-year-old blueliner has nine goals and 20 assists in 60 games, offering a nice positive in an otherwise lost season for the Islanders.

By RotoRob
Tags: Alex Lyon
This entry was posted on Saturday, March 24th, 2018 at 8:10 pm and is filed under HOCKEY, RotoRob, The Wire Troll. You can follow any responses to this entry through the RSS 2.0 feed. Both comments and pings are currently closed.