The Wire Troll: Brandon Carlo Getting More PT in Beantown 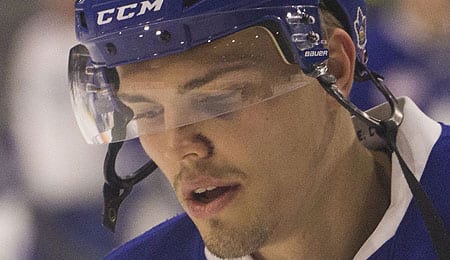 Andreas Johnsson could rip it up on his new line. (Rick Madonik/Toronto Star)

Welcome back to another week of Fantasy hockey. It’s now late-December, and with calendar year 2018 waning, it’s time for you to make your move. Wire time, baby!

This week, fresh back from a suspension, Toronto forward Zach Hyman will miss at least three weeks because of an ankle sprain; Jordan Staal has returned to the Carolina lineup after missing five games with a concussion; and Edmonton will be without forward Jujhar Khaira after he got nailed for a two-game suspension for cross-checking.

Brandon Carlo, D, Boston Bruins (ESPN: unowned; CBS: 3 per cent): Carlo keeps seeing more ice time, receiving at least 21 minutes in three of the last four games — especially at even strength, when he’s getting as much or more than any Bruin blueliner. Sure, some more PP time would really jack up his value, but did manage his first goal of the season just over a week ago, and he’s gone +2 over the last four. Expect Carlo’s +/- to continue to improve as the season progresses (he was +10 last season), and he’s improved his secondary numbers with 31 blocks, 15 takeaways and 21 PM already. An RFA at the end of the season, this U.S.-born player might get more chances with a team that had fewer offensive defensemen. Even so, Carlo reached the NHL very quickly, and has proven he belongs, but he’s not likely to ever put up a ton of points, so you really want him more for those peripherals.

Cam Ward, G, Chicago Blackhawks (ESPN: 1.2 per cent; CBS: 21 per cent): Ward recently hit a rough patch, but seems to have righted the ship at the perfect time. With Corey Crawford (concussion) out yet again, Ward has stepped up, saving 30-of-31 shots in a win Tuesday and then following that up with 26 saves on 28 shots to win Thursday. Ward’s record isn’t great on the lowly Hawks, and his save percentage is an eyesore this season, but he’s heading in the right direction, and should see plenty of action for the time being. It’s still weird seeing him play for anyone but the Hurricanes, as he certainly left a lasting legacy in Carolina as one of three goalies in NHL history to win the Conn Smythe trophy as a rookie.

Andreas Johnsson, LW, Toronto Maple Leafs (ESPN: 0.9 per cent; CBS: 35 per cent): The streaky Johnsson got super hot at the end of November until early December, but has slowed the past couple of weeks. However, with Hyman out, Johnsson is now moving up to the top line with John Tavares and Mitch Marner, so we’re expecting him to pick it up again now. In his first full season, Johnsson has been trying to find consistency, but a seven-game stretch playing with Auston Matthews in which he fired five goals and added five assists gives you an idea of what the young Swede is capable of. During that run, Johnsson had a hat trick, and his first of the night reminded some of a classic Darryl Sittler goal (see video below).

Isac Lundestrom, C, Anaheim Ducks (ESPN: unowned; CBS: 2 per cent): Lundestrom is not someone you want to add immediately, or even for the remainder on the season, but he makes for a fine dynasty league option. The fact that he’s been loaned to Sweden for the upcoming WJC is great news for him, as he should be a dominant presence in this tourney and return to the NHL with much more confidence after failing to score in 15 games so far. Lundestrom has had five high danger scoring chances so far for the Ducks, but no luck; expect that to change as a 19-year-old at the WJC. The 23rd overall pick this year is one of just five players from his draft to activate the first year of his entry level contract by playing in over nine games, which gives you an idea of what Anaheim thinks of him. Lundestrom’s vision and high hockey IQ will allow him to become a fine playmaking No. 2 centre in time.

The late Bobby Darin was an American musician who rolled out a string of hits from the mid-’50s to the early-’70s. In 1963, he released a six-track 7-inch EP entitled Bobby Darin Presents. From this release came “Not For Me.” Last year, the tune was covered by Perfume Genius.

By RotoRob
Tags: Brandon Carlo
This entry was posted on Saturday, December 22nd, 2018 at 1:39 pm and is filed under HOCKEY, RotoRob, The Wire Troll. You can follow any responses to this entry through the RSS 2.0 feed. Both comments and pings are currently closed.