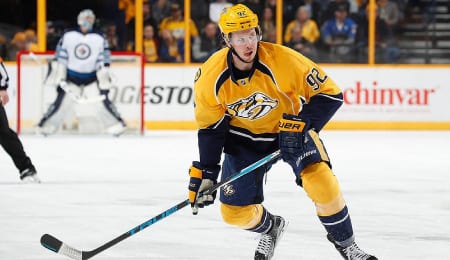 Ryan Johansen has picked up his play. (NHL.com)

Welcome back to another week of Fantasy hockey. We’re nearly halfway through this strange season, meaning you’ve still got plenty of time to catch up… or solidify your lead. Use that Fantasy hockey waiver wire!

This week, Washington hasn’t ruled out the possibility that goalie Henrik Lundqvist could return this season; Columbus added depth to its defense by acquiring blueliner Mikko Lehtonen from Toronto for goalie Veini Vehvilainen; and St. Louis has finally rewarded netminder Jordan Binnington, giving him a six-year, $36-million extension.

Ryan Johansen, C, Nashville Predators (ESPN: 21.1 per cent; CBS: 18 per cent): It’s been a very frustrating season in Nashville, and Johansen — to his credit — isn’t faking it for the media. But with Matt Duchene out for the next 3-to-5 weeks, Johansen is in a great place to step up and get things going. Johansen was shut out Thursday, but had scored two goals with an assist in the previous four games and his PT is up to nearly 19.5 minutes per game in March after being unproductive over the first two months. His PM count is down this season, but he’s poised for a nice run over the next few weeks — especially considering his SCF percentage is at its highest (55.71 per cent) since 2016-17. Johansen is a big centre with a great feel for the offensive side of the game, and as a trade candidate, he’s definitely someone to consider because a fresh start may really help salvage his season. He’s mostly been a disappointment since landing in Nashville, but is capable of providing a big net front presence (see video below).

Antti Raanta, G, Arizona Coyotes (ESPN: 18.7 per cent; CBS: 23 per cent): When we last checked in on Raanta a year and a half ago, his injury opened the door for Darcy Kuemper to play a ton. Now, it’s Kuemper who’s hurting, suffering a knee injury on Monday that’s left him week-to-week. So suddenly Raanta’s Fantasy value has soared and while Adin Hill remains an option for starts in the Coyote net, Raanta looks like the one to add here. Raanta was perfect in relief after Kuemper got hurt Monday and then played brilliantly on Wednesday, keeping his team in a game that should have been a blowout loss. It’s been a rough start to the season for Raanta, but he has a glorious opportunity to right the ship now.

Eric Staal, C, Buffalo Sabres (ESPN: 21.9 per cent; CBS: 19 per cent): Wow, we haven’t thought about Staal since he first arrived in Minnesota. Well, now he’s taken his act to Buffalo, and with Jack Eichel (UBI) out at least a week, he’s got a chance to be relevant again. With assists in back-to-back games, Staal has responded, and if nothing else he’s increasing his trade value as a pending UFA. It’s clear that so far this season he hasn’t been nearly as productive, but this week may spark him.

Adrian Kempe, RW, Los Angeles Kings (ESPN: 47 per cent; CBS: 33 per cent): Early on his rookie season, we identified Kempe as an impressive young player, and he vindicated us with a fine sophomore season. However, since then, he hasn’t really built on that — until now. Kempe scored six goals in a three-game span last week to announce his breakout with authority. He’s been drilling the net with shots (at least two in five straight games), and it’s paying off. Every season, Kempe’s been given a bit more ice time, and we’re now seeing a player living up to his selection in the first round back in 2014 with seven goals over his last 10 games.

Pink Floyd has always been known for its sonic experimentation, and its 1975 album Wish You Were Here was one of the finest examples. The B-Side of the disc’s only single was “Shine on You Crazy Diamond Pt. 1,” which is obviously much better consumed from the album, but is curious to hear boiled down for a 45.

By RotoRob
This entry was posted on Saturday, March 13th, 2021 at 12:13 pm and is filed under HOCKEY, RotoRob, The Wire Troll. You can follow any responses to this entry through the RSS 2.0 feed. Both comments and pings are currently closed.