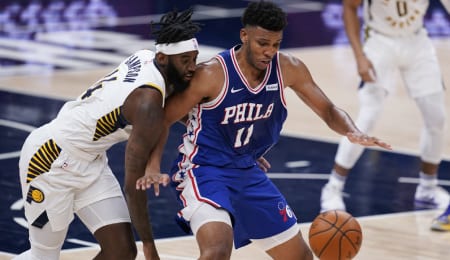 Welcome back to another week of Fantasy basketball. We’re about three-fifths of the way through the season, so keep on truckin’ and use that wire, peeps!

This week, Giannis Antetokounmpo pissed Philly off by sitting down on the court after going on a major run to help the Bucks down the 76ers; Paul George‘s frustrations over non-calls is boiling over; and Stephen Curry took home the Jackie Robinson Sports Award for his off court endeavours.

Tony Bradley, C, Philadelphia 76ers (ESPN: 1.1 per cent; CBS: 4 per cent): With Joel Embiid out for at least two weeks with a knee injury, Bradley has moved into the starting lineup for the Sixers. Bradley, a first round pick by the Lakers in 2017, hasn’t really been on the Fantasy radar up to this point, but what he’s done recently in limited minutes has us intrigued. On Wednesday, he flirted with a double-double while adding two assists and a steal in just 16 minutes, and last week, he went off for 14 points, five boards and three blocks in 22 minutes. Bradley was a forgotten man last month, but is now seeing almost enough PT to be worth a look in deeper formats. He’s never gotten a chance to start this often, and with a regular dose of 20+ minutes, he could be a nice addition. And if Bradley winds up getting dealt at the trade deadline, he could find himself in a more Fantasy-friendly situation. Even with Embiid out, Bradley still has to fend off Dwight Howard for minutes, so it’s not ideal. But even though he’s not the most athletic player on the court, Bradley has great rebounding potential and periodically flashes some defensive skill (see video below).

Kenyon Martin Jr., SF, Houston Rockets (ESPN: 21.1 per cent; CBS: 49 per cent): Wow, Martin has really been a revelation since coming up from the G-League, giving distraught Rockets’ fans some hope for the future. On Wednesday, the rookie just missed his second double-double in four games, and he’s been jacking it up from downtown far more often this month. Taken 52nd overall in last year’s draft, Martin has arrived as a legitimate Fantasy asset, so if he’s still available in your league, do something about it. Now!

Average White Band churned out some memorable soul/disco hits in the mid- to late-’70s, and some fine B-sides as well, including “Person to Person,” which was the flipside to the 1975 top 10 U.S. single “Cut the Cake.”

By RotoRob
This entry was posted on Saturday, March 20th, 2021 at 12:22 pm and is filed under BASKETBALL, RotoRob, The Wire Troll. You can follow any responses to this entry through the RSS 2.0 feed. Both comments and pings are currently closed.