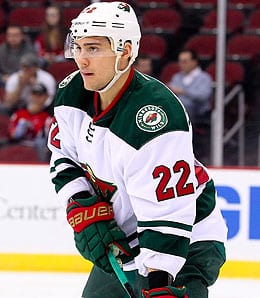 Despite a change of lines, Nino Niederreier is on fire. (Suggest-keywords.com)

Our NHL Editor may be a big Minnesota Wild fan, but we swear this Red, White and Green heavy Wire Troll wasn’t done deliberately, so bear with us. We’ll start with a Devil of a player from New Jersey.

Michael Cammalleri, LW, New Jersey Devils (ESPN: 47.3 per cent; Yahoo: 43 per cent): One of the league’s most underrated stars, Cammalleri was the best player in Fantasy hockey last week with four goals, eight points, a plus-2 rating, two penalty minutes, three power play points (see video below for his major blast on the man advantage) and 17 shots on goal. He’s also logging big time minutes — over 22 per game last week — which means the Devils are relying on him to get the job done in the absence of offseason acquisition Taylor Hall.

Mikael Granlund, C/LW, Minnesota Wild (ESPN: 17.3 per cent; Yahoo: 14 per cent): Granlund has played the role of No. 1/2 centre for Minnesota since the departure of Matt Cullen in 2013. Granlund has had sporadic success, but the arrival of Eric Staal has allowed him, along with Charlie Coyle, to transition to the wing. Both 2010 first round picks have found big success there this season, and there’s definitely a benefit for Granlund to play alongside fellow countryman Mikko Koivu. Granlund has 11 points in his last 12 games, including an impressive five goals. He had a goal, five points, a plus-2 rating, three power play points and three shots on goal last week.

Nino Niederreiter, LW/RW, Minnesota Wild (ESPN: 16.3 per cent; Yahoo: 13 per cent): After several successful games alongside Staal and Coyle, Niederreiter has once again found himself alongside Erik Haula and Jason Pominville with the return of Zach Parise to the lineup. The Wild isn’t complaining — that was the team’s most successful line down the stretch last season. In four games last week, Niederreiter had three goals, five points, a minus-1 rating, three power play points and nine shots on goal. His seven goals on the season are one behind Coyle for the team lead, and he’s only averaging 14:27 of ice-time per game. Can you believe all it took to get Niederreiter was Cal Clutterbuck and a third round pick?

Chad Johnson, G, Calgary Flames (ESPN: 24.6 per cent; Yahoo: 40 per cent): A journeyman, Johnson seems to have finally found his place in the NHL. The Flames’ netminder led all goaltenders last week with three wins, a 1.00 goals against average, a .968 save percentage and a shutout. He has seven wins, a 1.98 goals against average and a .928 save percentage this season, meaning you should have already added him to your team.

Jonas Brodin, D, Minnesota Wild (ESPN: 6 per cent; Yahoo: 8 per cent): Not known as an offensive-minded defenseman, Brodin is on his way to a career season. Injuries to Jared Spurgeon, Marco Scandella and, now, Christian Folin have only increased Minnesota’s reliance on Brodin, which means the smooth skating defender has also seen a boost in power play time. He’s made the most of it, collecting a goal, four points, three power play points, a game-winning goal, five shots on goal and four defensive points last week. He’s no Ryan Suter or Drew Doughty, but he’ll do as a roster player off the bench.

Statistically speaking, this should probably go to Toronto’s Auston Matthews. However, we have to tip our hats to Pittsburgh Penguins rookie Jake Guentzel. A fresh faced Minnesota kid out of the University of Nebraska Omaha, it didn’t take him long to make his mark on the NHL. First game, first period, first shift, first shot, first goal… and then he added another before the period was even over! Playing alongside the likes of Phil Kessel and Evgeni Malkin, Guentzel collected three goals and four points this week, including an assist on a Kessel goal in his first game ever against his hometown Wild in a 6-2 loss in St. Paul. Guentzel had a considerable cheering section there, too, which made it all the more memorable.

By Dakota Case
Tags: Minnesota Wild, Nino Niederreiter
This entry was posted on Sunday, November 27th, 2016 at 1:07 pm and is filed under Dakota Case, HOCKEY, The Wire Troll. You can follow any responses to this entry through the RSS 2.0 feed. Both comments and pings are currently closed.