The Wire Troll: Jonathan Quick Jumps Back in Time 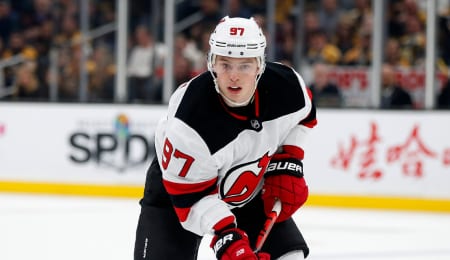 Welcome back to another week of Fantasy hockey. We’re into March now, and the season is winding down. In fact, if you’re playing H2H, you may already be in the playoffs. However, there’s still time for you to improve your team, so mine that wire.

This week, the game lost one its all-time greats as Henri Richard — owner of a record 11 Stanley Cup rings — passed away at age 84; Mika Zibanejad‘s fantastic season reached a new level as he potted five goals on Thursday, tying the Ranger record; and the Sharks played Thursday despite the local county recommending canceling “mass gatherings” with the coronavirus spreading in the region.

And now, let’s get to this week’s Fantasy hockey waiver wire recommendations, featuring plenty of help between the pipes…

Jonathan Quick, G, Los Angeles Kings (ESPN: 12.8 per cent; CBS: 34 per cent): It’s been a while since this former playoff MVP was available on the wire, but despite the Kings’ woes, Quick has been much better this season — especially lately. In the first half last season, we talked about him getting shelled, but the tables have turned. Over his last five games, Quick has surrendered one goal three times and on Thursday, he burned the Leafs with a 36-save shutout — his first goose egg of the season. He was stellar last month (2.50 GAA, .920 save percentage) and in March is picking up where he left off. Quick needs just one more win to match his total from all of last season, and the Kings have most of their remaining games at home, where they are actually capable of winning. With his nice size and lightning reflexes, he should be a solid asset down the stretch, and is still very capable of being a difference maker with his flexibility (see video below).

Nikita Gusev, RW, New Jersey Devils (ESPN: 42.7 per cent; CBS: 44 per cent): Not your typical rookie — the Russian born Gusev is 27 — he’s still enjoying a very fine debut season. On Tuesday, his six-game point streak was snapped, but he’s coming off a very strong February (10 points in 14 games) and has been getting plenty of PP time of late. Gusev looks like a very fine option both in redraft leagues and in DFS play.

Dustin Brown, RW, Los Angeles Kings (ESPN: 32.7 per cent; CBS: 23 per cent): After he enjoyed a late-career renaissance the last couple of seasons, 2019-20 has proved unproductive for Brown, but he seems to be finishing strong. Before getting shut out Thursday, he had recorded four points over the previous four games coming off a February in which he potted a season-best four goals. Brown’s had a down season, but at least he’s improved his +/- this season.

Anton Khudobin, G, Dallas Stars (ESPN: 21.1 per cent; CBS: 29 per cent): While Ben Bishop (LBI) was out day-to-day, Khudobin was seeing the bulk of action in the Star net and he’s done a superb job. On Thursday, Khudobin stopped 30 of 32 shots he faced (both goals were on the power play), but without any goal support he was unable to earn a win, suffering his third straight loss. Over his last five, he’s only given up nine goals, recording a .944 save percentage, and has generally been very consistent this season (his worst month as far as GAA is 2.62 and worst save percentage is .901). Khudobin hasn’t seen as much action this season, but at .930, he’s putting up the best save percentage of his career, making him a nice asset (at least in deeper leagues) even as Bishop returns to action this weekend.

Chris Driedger, G, Florida Panthers (ESPN: 1.5 per cent; CBS: 6 per cent): Driedger has just returned from a groin injury and looked good is his first game back, perfect timing with Sergei Bobrovsky out. Driedger will man the crease again on Saturday, and in seeing his most action ever this season (10 games, nine starts), he’s been a nice surprise (five wins, 2.29 GAA).

Alex Stalock, G, Minnesota Wild (ESPN: 23.2 per cent; CBS: 41 per cent): The Wild has been making a major playoff push and one of the key ingredients has been Stalock’s performance. Over his last 15 games, he’s gone 11-3-1 with a brilliant 2.00 GAA and the league’s best save percentage over this stretch. Stalock was particularly fantastic in wins this week over the Preds and Sharks (the same Sharks that traded him away over four years ago), stopping 77 of 80 shots he faced. In seeing more action than ever this season, he’s managed to win 20 games for the first time.

Duncan Keith, D, Chicago Blackhawks (ESPN: 41.8 per cent; CBS: 43 per cent): Keith has been doing a solid job on breakouts this season, and he had been particularly hot lately, recording four assists in his last four games (and 10 over his last eight) before getting shut out Friday against lowly Detroit. He’s been mostly quiet this season, but with a goal and 10 assists in 17 games since the beginning of February, he’s been well worth owning. There’s no doubt that the Hawks are a team in transition, but for now Keith remains an asset.

Norwegian singer Annie has been performing since 1993, and is still going strong. Her debut album, Anniemal, was released in 2004, and the third single from this release was “Heartbeat.”

By RotoRob
Tags: Jonathan Quick, Nikita Gusev
This entry was posted on Saturday, March 7th, 2020 at 1:59 pm and is filed under HOCKEY, RotoRob, The Wire Troll. You can follow any responses to this entry through the RSS 2.0 feed. Both comments and pings are currently closed.