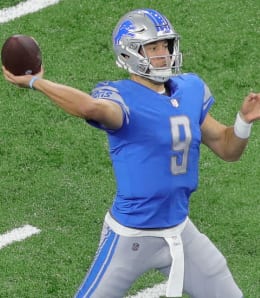 Matthew Stafford will try to take the Rams over the top. (Detroit Lions)

The presumed offseason quarterback carousel started off with a bang when the L.A. Rams dealt Jared Goff, first-round picks in 2022 and 2023 and a third-rounder in 2021 to the Detroit Lions in exchange for QB Matthew Stafford.

From a pure risk-analysis perspective, L.A. has effectively mortgaged its future to buy Stafford in an attempt to “win now.” For the next two years, the Rams will not have a first-round pick nor will they have healthy cap room. As it stands, L.A. is $26 million over the cap with $8.6 million in dead money from cutting RB Todd Gurley last year, and that’s before calculating Goff’s dead money ($22 million). Moreover, because of Covid-19, the base cap space is likely to be reduced next season, which will narrow the Rams’ championship window further.

There’s a belief in the NFL that if you don’t have a Peyton Manning or Tom Brady, the path to winning a Super Bowl lies in a rookie or an aging vet. Los Angeles has taken this to heart by acquiring Stafford. The 33-year-old will have a chance to prove his mettle by leveraging a capable offensive line, unique receiving corps and signal calling HC Sean McVay. To the Rams’ organization, Stafford’s contract is incredibly attractive: cap hits of $20 million and $23 million in 2021 and 2022, respectively, with no dead cap.

Many analysts will argue that with this trade, the Lions have hit the reset button, and that isn’t far from being true. Despite hiring a new HC in Dan Campbell and a new general manager in Brad Holmes, the organization will need to make tough decisions regarding the bloated roster Matt Patricia and Bob Quinn created. The influx of draft picks helps, but the lack of cap room and the additional dead money ($17.8 million) from Goff will weigh on the speed of the organization’s recovery. Additionally, Detroit’s scouting team is flaccid, so there’s no guarantee that the Lions will use their picks wisely.

Let’s explore the Fantasy ramifications this trade will have on each team.

The three-headed backfield of Cam Akers, Darrell Henderson and Malcolm Brown should all theoretically benefit from defenses lightening the box in order to stop Stafford from throwing the ball. Additionally, Los Angeles ranked seventh in adjusted line yards and is likely to return most, if not all, of its offensive line players from 2020, which also helps the running game.

McVay’s offense has gone through a serious overhaul since Gurley’s MVP days. From deploying 11 personnel 89 per cent of the time in 2017, McVay has since made it easier for Goff by forcing short YAC-induced throws towards the middle of the field rather than the perimeter. Whether this trend will continue remains a mystery as Stafford has proven he is more efficient in a Run and Shoot/Spread offense than in West Coast/Heavy Run. We expect Cooper Kupp and Robert Woods to produce at slightly higher levels, but we’re keeping a serious eye on Van Jefferson as the perennial vertical threat. Jefferson led the Rams pass catchers with an ADoT of 11.2 yards, three yards higher than the next player.

Faced with an immediate downgrade, the Detroit Lions will have to live through two years of being a bottom-barrel team with a place-holder quarterback. Although we alluded to Stafford not being the huge upgrade everyone expects him to be, Goff will be exposed as the inexperienced quarterback he is. With virtually no supporting cast and a young front office, Goff is poised to be the organization’s sacrificial lamb — unless, of course, he can somehow become as mobile as he is in the virtual world (see video below).

The hiring of former Charger HC Anthony Lynn as offensive coordinator indicates a return to a run-heavy scheme for the Lions. D’Andre Swift and Adrian Peterson are the presumed starters for now, however, the addition of Goff actually hurts the backfield’s efficiency. If the NFL understands who Goff is by now (and it does), it will load the box to stop him and the backfield from running while daring him to throw to his outside receivers in Cover one. With seemingly negative game-script for every game, it is hard to value anyone but Swift.

We argue that all Lions’ receivers should be downgraded except for T.J. Hockenson. We don’t expect Goff to be able to throw deep behind his new anemic offensive line, so both the X and Y receivers (Marvin Jones, ADoT of 13.1; and Kenny Golladay, ADoT of 15) will suffer with Goff under centre. The one saving grace is positive game-script.

English rock band The Rolling Stones formed in 1962, and in becoming one of the all-time greats, are still at it today. In 1976, they released Black and Blue, their 15th American album, which included a cover of Eric Donaldson‘s “Cherry Oh Baby,” a tune that would be featured prominently live.

By Lucas Chan
This entry was posted on Saturday, February 20th, 2021 at 3:48 pm and is filed under FOOTBALL, Lucas Chan, Transactional analysis. You can follow any responses to this entry through the RSS 2.0 feed. Both comments and pings are currently closed.